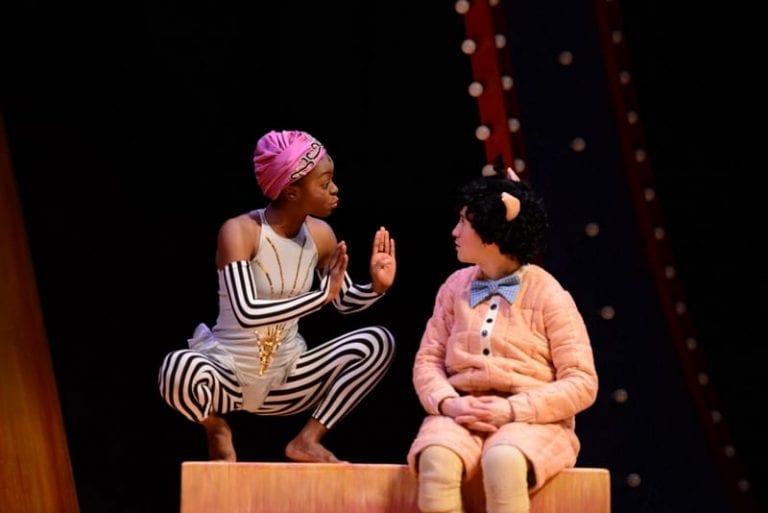 Review: “Charlotte’s Web” goes over the top at Alliance, but still spins a charming yarn

The two main settings for E.B. White’s “Charlotte’s Web,” the barnyard and the county fair, meld in a new theatrical adaptation for families, at the Alliance Theatre through March 10. White’s classic children’s book tells the story of Wilbur the pig, a runt first saved from the ax by the farmer’s daughter, Fern, and then again by a clever and caring spider named Charlotte, who writes words in her web to save him from the dinner table and then to win him top prize at the county fair.

In director Rosemary Newcott’s vision, the barnyard — a community of talking animals, each with its own distinct personality — becomes a sort of busy carnival midway with the floor as a circus ring full of Cirque-style acrobatic stunts and tricks. Unfortunately, the actress playing Charlotte, Danielle Deadwyler, sprained her ribs during a school matinee performance during preview week, and the most central planned stunt, Charlotte on aerial silks, had to be removed on opening night. Organizers don’t know how long they’ll have to keep the stunt out of the show, but for opening weekend they had to drop it entirely.

Charlotte is a powerful character in the book. Her ability to spin webs is understood as beautiful, redemptive, even miraculous, so bringing it to the stage as a spectacular, breathtaking stunt makes sense. Such a central aspect removed from the production — Deadwyler climbs ladders instead — leaves the show feeling a little flat. And some of the remaining stunts end up seeming tacked on.

Juggling, weightlifting and balancing aren’t out of place when performed by Wilbur’s arrogant, showy competitor at the county fair. And some tumbling and cartwheels from Templeton the rat (Andrew Crigler) fit that character well. But I was left wondering why a goose on Zuckerman’s farm rides a unicycle and why a sheep might pull, magician-style, a whole pizza and a giant watermelon from his coat.

Admittedly, these questions may not be as pressing to a child. But even if unarticulated, they might accumulate as a sticking point in the imagination. In the novel, the barnyard is a place of slow change — the seasons, the birth of goslings, web spinning — if not halcyon stasis, and calm. Here it has become showy. And many of the tricks are only moderately impressive, not really spectacular enough to thrill on their own. Surprisingly, one of the most successful additions is a little blues song for Wilbur (Christopher Moses) on harmonica as he laments his loneliness just before meeting Charlotte.

The heart of White’s enduring story has nothing to do with acrobatics or aerial stunts, and fortunately scriptwriter Joseph Robinette’s adaptation gives the fable about friendship and bravery in the face of mortality a charming retelling here, hewing pretty closely to White’s story, with the smart innovation of a Woody Guthrie-style, folksy singing narrator (Rob Lawhon).

Deadwyler as Charlotte, though she may be a little young for the role, brings out Charlotte’s determination, honesty and self-sacrificing kindness. Her Charlotte has a matter-of-fact attitude toward her often terrible (she’s a spider who sucks the blood of flies after all) power and beauty. “It’s the way I was made,” she plainly and politely explains to Wilbur as she’s about to kill a fly and suck its blood. “Now if you’ll excuse me, I’m going to have my breakfast.”

It’s the character’s plain-speaking, all-accepting insight that can somehow help introduce themes of pain, death and brutality into a children’s story. In spite of its major missing piece, the Alliance production brings out the most important aspects of this resilient tale of love and friendship.