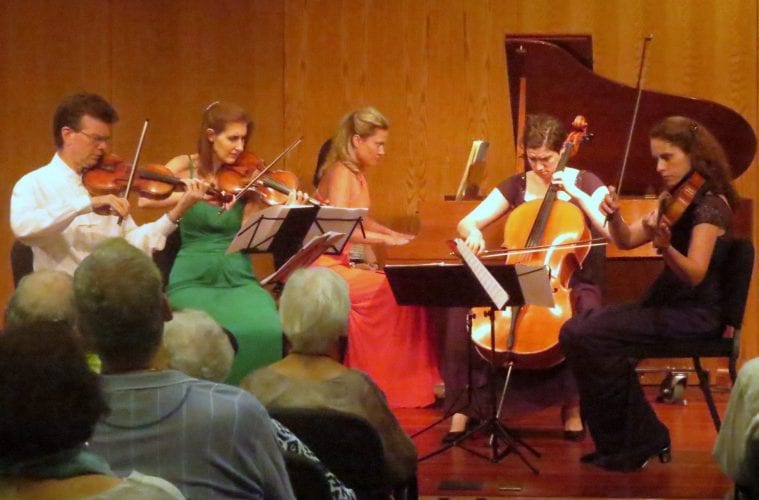 On Monday, members of the Cecilia String Quartet, violinist Scott St. John and pianist Julie Coucheron performed a recital of music by Mozart, Beethoven and Brahms at the Albert Carlton-Cashiers Community Library in Cashiers, North Carolina, as part of this year’s Highlands-Cashiers Chamber Music Festival.

The same program was performed in Highlands the night before. The Cecilias and St. John had also played another pair of Highlands-Cashiers concerts with clarinetist Richard Stoltzman on Friday and Saturday. Monday’s recital was their final appearance in the festival.

I say “members of the Cecilia Quartet” since an unusual circumstance affected the entire weekend’s events. The quartet’s regular first violinist, Min-Jeong Koh, was unavailable, on tour in China at the same time the group was scheduled to play these Highlands-Cashiers concerts. This conflict was known well in advance, so the remaining Cecilias — violinist Sarah Nematallah, violist Caitlin Boyle and cellist Rachel Desoer — asked William Ransom, the festival’s artistic director, if they could still perform, albeit with St. John substituting for Koh. Ransom agreed.

It was an easy choice: St. John taught two of the group’s players and also mentored the Cecilia Quartet when it formed in 2004 while he was on the faculty at University of Toronto, before becoming second violinist of the St. Lawrence String Quartet, a position he departed in early 2014. The weekend’s handful of concerts were the first time either the Cecilia Quartet or St. John had performed in the Highlands-Cashiers area.

The program opened with Mozart’s String Quartet in F Major, K. 590. Granted he was a substitute player, but St. John’s violin somewhat dominated the quartet’s sound, and the ensemble’s togetherness seemed a little rough at certain points. The other three players seemed more on common ground, probably a natural consequence of the situation. It was hardly a classically reserved Mozart; rather an assertive rendering involving considerable dynamic flux — frankly a bit too much.

In contrast was Beethoven’s String Trio in G Major, Op. 9 No. 1, splendidly performed by the three Cecilia regulars, Nematallah, Boyle and Desoer. Here the sense of ensemble and balance were totally in focus for the duration of the work, while bringing to the fore the composer’s characteristic sense of energy and underlying momentum. It was the highlight of the evening.

After intermission, Coucheron joined the quartet for the Piano Quintet in F minor, Op. 34, by Johannes Brahms. A familiar performer to festival audiences, this was Coucheron’s first time performing with St. John and the Cecilia musicians. The musical match was made by Ransom, who revels in making connections between potentially compatible performers. The choice made for an excellent fit indeed.

The Atlanta-based Coucheron was given a small but serviceable piano to play, the resulting balance of forces working out very well for the most part, though one might have appreciated the fullness and presence of a larger instrument in louder ensemble passages. Coucheron nonetheless expertly played through its somewhat muted timbral demeanor to help bring more equilibrium to the overall ensemble than was the case in the opening Mozart. The chemistry among the five players seemed to work well for this broad Romantic work, bringing the evening to a close with a great deal of musical satisfaction.

The auditorium at the Albert Carlton-Cashiers Community Library is a smaller than the Martin-Lipscomb Performing Arts Center in Highlands, but the space has an immediacy and sonic clarity that suits classical chamber music rather well. That in itself is a nice, ear-opening discovery for a first-time visitor. Highlands is roughly a two-and-a-half hour drive from Atlanta, Cashiers another 20 minutes farther in what has for decades been a highly popular summer mountain vacation region of western North Carolina. The festival, now in its 35th season, continues through August 7.