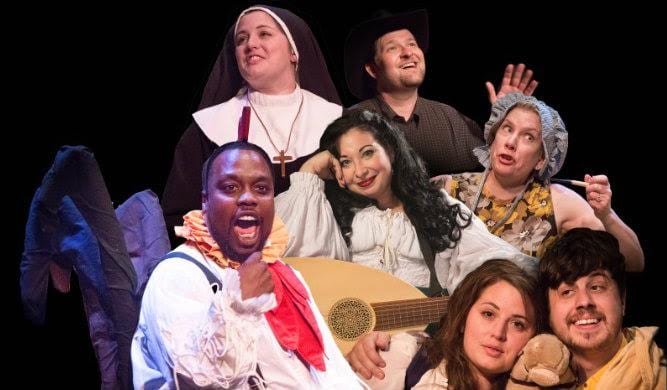 Review: “Canterbury Tales” gets an uneven but often bawdy staging at Shakespeare Tavern

He wrote prolifically throughout his long career, but it was his The Canterbury Tales — an indictment of the church and English society — that Geoffrey Chaucer remains known for. The send-up of the work at the Shakespeare Tavern Playhouse, a frequent offering from the company, is a politically incorrect retelling of some of those memorable tales. Running through September 9, it’s a hit-or-miss affair that luckily doesn’t take itself too seriously. Nose-in-the-air patrons might not approve of this, but adventurous patrons should.

The Tavern has been staging this production for quite some time now. This version was originally adapted by John Stephens, who staged it at his late Irish-themed Theatre Gael before Tavern took the reins. The company has shaved Chaucer’s work down to six tales (originally part of the mix, “The Franklin’s Tale” has been taken out) as well as a prologue that involves all eight of the performers — Kirsten Chervenak, Laura Cole, Nicholas Faircloth, Rivka Levin, Drew Reeves, Adam King, Enoch King, Kirstin Calvert — as the pilgrims/tourists heading to Canterbury.

The tales have been modernized, with all sorts of pop references — The Godfather, the Dallas television show music theme, etc. Most of them last 20–30 minutes, and many involve some puppetry, sight gags and other props. Some are inventive and fun; others come up a bit short.

The evening’s first story, “The Miller’s Tale,” is probably the least successful of the bunch, involving a man, his wife and two young men eager to sleep with her. It features some fooling around, flatulence, a hot poker going a place hot pokers have no business being and other bawdiness, but ultimately feels a bit forced and overdone.

Both the slickly performed “The Pardoner’s Tale” and the over-the-top “The Merchant’s Tale,” despite promising setups and twists on its central characters, are somewhat disappointing as well.

Yet the others leave more of an impression. “The Wife of Bath’s Tale” is more satisfying and balanced. Dealing with the role of women in society at the time — and the view of marriage — it’s highlighted by a regal Cole as Guinevere and Calvert in a droll turn as an elderly woman interacting with a knight. In “The Nun’s Priest’s Tale,” Enoch King plays Chauntecleer, a proud rooster. The skit employs an endless amount of cock jokes, but it’s all done cheerfully and prompts the night’s funniest line — “When an oversexed chicken talks to you, you should not listen,” a character quips.

Finally, “The Reeve’s Tale” ends the production with a bang — quite literally. Full of sexual shenanigans and revenge, it turns into a spaghetti western with a shootout, all sorts of weaponry and a proper amount of goofiness.

Many of these cast members have been doing this a long time — and it shows. Last season’s set of performers was nominated for a Suzi Bass Award for Best Ensemble in a Play, and they are the chief reason to see this. Enoch King stands out as several characters, as does Calvert. The troupe play so many characters each, it can be a challenge keeping up with them all, but they certainly fling themselves into the work, head first.

This production of The Canterbury Tales is directed by Kati Grace Brown, and while she seasons about half with just the right amount of restraint, she lets others spiral out of control.

Unlike the late Georgia Shakespeare Festival, which would offer innovative spins on their productions, Shakespeare Tavern chooses to offer up straight-up, no-frills work. It can be frustrating at times, but it’s refreshing when the company can let down its hair and present this kind of silly, irreverent fare.