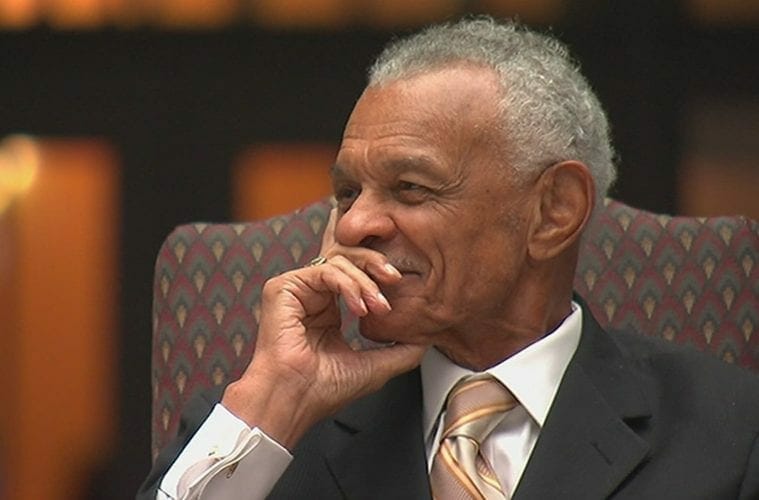 C.T. Vivian's legacy as a civil rights visionary is vividly described in "It’s In the Action: Memories of a Nonviolent Warrior."

The civil rights movement, with its starkly drawn heroes and villains, has been amply mythologized, but until now we were missing an important firsthand account. Cordy Tindell (C.T.) Vivian, a stalwart lieutenant of the Rev. Martin Luther King Jr. and a visionary leader in his own right, was at work on a memoir when he died last summer.

Steve Fifer, a writer and community activist, took Vivian’s papers and spliced them together with interviews, eulogies and other accounts to produce It’s In the Action: Memories of a Nonviolent Warrior, released in March by NewSouth Books, with a foreword by Andrew Young. It provides valuable context to existing scholarship about the movement, along with a personalized portrait of a formidable, and compelling, activist who deserves a larger profile in the annals of social justice and progressive theology. King himself pronounced Vivian “the greatest preacher to ever live,” so allies have been waiting for him to weigh in. 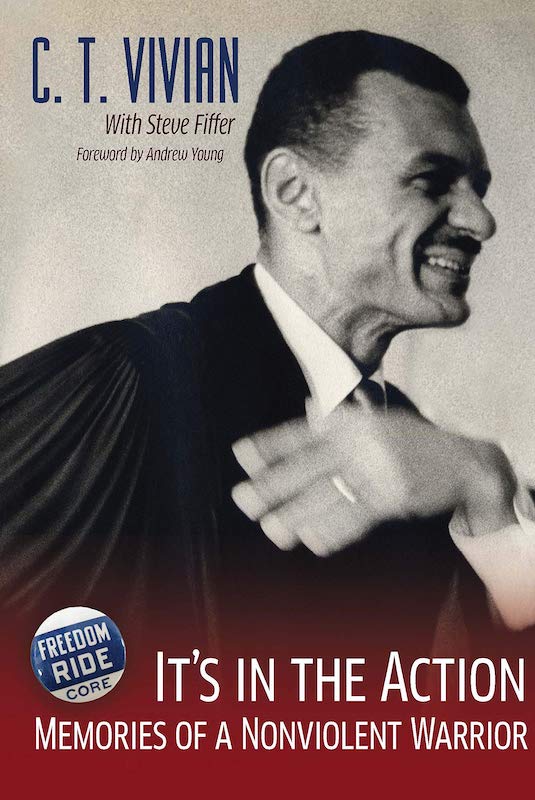 Unlike many of the movement’s other marquee names, C.T. Vivian was not a Southerner. He was born in Missouri and ultimately ended up in Peoria. A scrappy kid whose mischievous grin lasted a lifetime, he learned lessons on the playground about the hollowness of a bully’s threats, which came in handy for his first sit-in demonstrations as he helped integrate a popular cafeteria in 1947. He writes affectionately of his upbringing in the Midwest. “I would have happily spent my life and raised a family in western Illinois, if only custom and tradition had been willing to accept me at the level of my humanity,” he writes. “I feel we both lost.”

Vivian was one of those communicative types besotted with words and gifted with a silver tongue. He dreamed of owning a newspaper, and worked as a sports editor early on, so readers of this memoir will enjoy his facility with language. His recollections amble along like droll anecdotes swapped in a parlor, and he seems not to take himself too seriously even when discussing heartfelt epiphanies. “The Lord works in mysterious ways,” he writes. “How else would you explain the fact that I received my calling to the ministry in 1954 in the warehouse of a mail-order-catalog company that had just made a small fortune marketing a set of ceramic cherubs called ‘Naughty Angels?’”

In the course of integrating Peoria, Vivian discovered Mahatma Gandhi’s teachings on nonviolence and extrapolated. “There would be three new ingredients,” he writes. There would be “involvement of the people themselves, that is, the rank and file, not the Talented Tenth. A rejection, a repudiation of segregation. In the past, we felt, too many people had lambasted segregation verbally and had then gone ahead and allowed themselves to be segregated. . . . Emphasis upon nonviolent direct action — that is putting one’s body into direct confrontation with the evil and the perpetrators of evil and accepting the consequences of one’s actions.”

Incrementally, the approach started working. Vivian and his friends integrated the city’s largest employer, Caterpillar Tractor. “This is the beauty of nonviolence,” he writes. “By being your best self you reach others at a deeper level than they thought they could be reached. And so the truth becomes the predominant force in what you are doing.”

Once called to the ministry, Vivian opted for seminary in Nashville, where the fabled “good trouble” awaited him with John Lewis and Diane Nash. He organized the first lunch-counter sit-ins and the very first civil rights march in 1961. Then came the Freedom Rides. Impressed with his mettle, King tapped him to help guide the Southern Christian Leadership Conference. 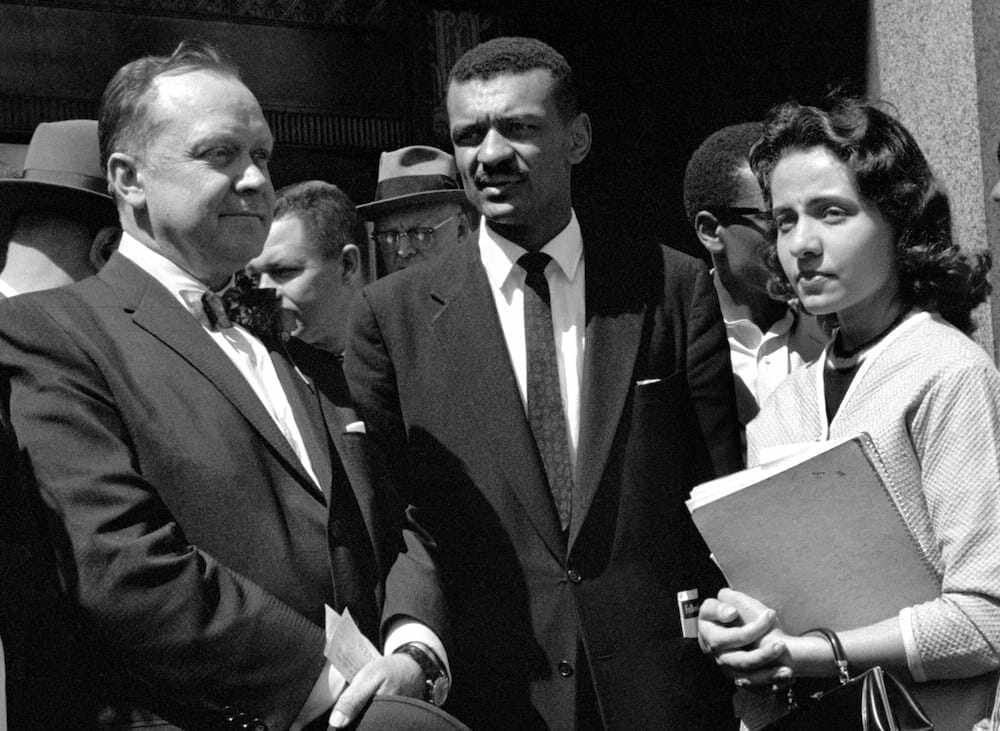 The movement has proved so thoroughly transformative at this point that its hard lessons can easily be taken for granted. Younger readers, especially, may not grasp the breathtaking radicalism of nonviolence, which Vivian hammers home to magisterial effect: the dogs, the fire hoses, the brazenness of calmly extending your head for the billy club. He writes of rehearsing for the moment a White assailant puts a lit cigarette out on your skin. And he writes movingly of the eerie silence of a march when it’s approaching its destination, how there is no talking, only the sound of determined footsteps, that much more powerful for being in unison. In 1961, Vivian wound up at the infamous Parchman Farm, or the Mississippi State Penitentiary, where for several agonizing moments, a guard held a gun to his back.

One of Vivian’s encounters became a defining moment in those troubled times. Jim Clark, Selma’s racist sheriff, was known to brandish a cattle prod. On February 15, 1965, Vivian took about 40 African Americans to register to vote. Tensions escalated. Vivian led the group in a call-and-response chant and asked Clark, “What do you tell your wife at night? What do you tell your children?” He evidently struck a nerve because Clark punched Vivian squarely in the face, and the minister tumbled down the courthouse steps — an assault captured by TV cameras. Andrew Young said, “No one gave C.T. any instructions to do that. It took a lot of courage to get in Jim Clark’s face. But if he had not taken that blow in Selma, we would not have had the Voting Rights Act.”

Vivian moved to Atlanta in the 1970s but did not hang up his spurs. Rosa Parks observed, “Even after things had supposedly been taken care of, and we had our rights, he was still out there, inspiring the next generation, including me.” 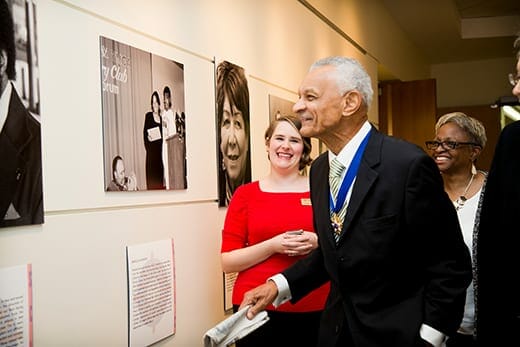 The Rev. C.T. Vivian tours the SCLC exhibition “And the Struggle Continues” in 2013 at Emory University. His papers are housed in the Stuart A. Rose Manuscript, Archives and Rare Book Library there.

Vivian founded a number of groups to foster Black education and empowerment, including the program that became Upward Bound. Ever the reader, he accumulated a collection of 6,000 books by and about African Americans, including first editions by W.E.B. Du Bois, Ralph Ellison and Langston Hughes, and a signed copy of Phillis Wheatley’s 1773 poems, the first known book written by an African American woman. They form the basis of the C.T. Vivian Library at the Peace Column in Vine City.

Nonviolent Warrior is a slender, easy-to-read volume, and we wonder why Vivian’s name is not as well-known as some of his cohorts. A clue might be found in the appended funeral eulogies. The Rev. Gerald Durley, senior pastor of Providence Missionary Baptist Church, said, “C.T. never wanted you to tell anything about him and what he did. The Reverend C.T. Vivian always gave the credit to others.”

Ironically, Vivian died within hours of his old friend John Lewis. The two warhorses lay side by side at Willie A. Watkins Funeral Home. A mortician recalled, “I took [Lewis] past C.T.’s house. I took him past Joe Lowery’s house, where I stopped and paused. I found my way down Martin Luther King and onto Ralph David Abernathy, where the funeral home is located. All these men. All these great men.”

Time to rename another street, Atlanta.