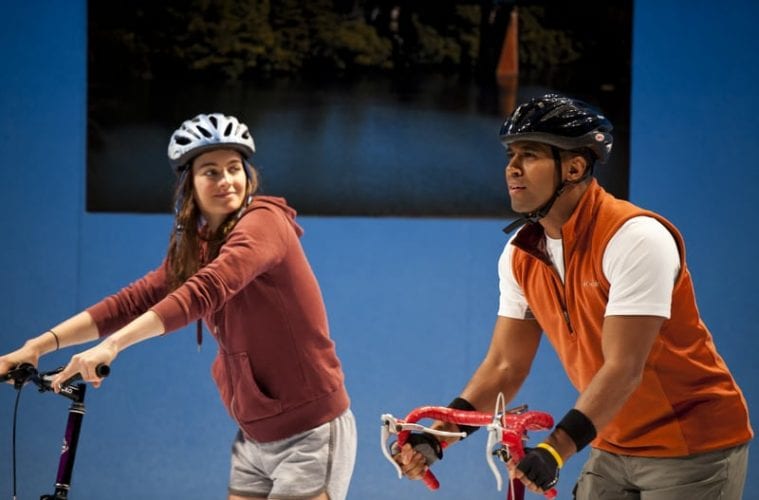 In “Bike America,” on the Alliance Theatre’s Hertz Stage through February 24, the impulsive, searching lead character, Penny (Jessica DiGiovanni), decides to take a bicycle trip across the country. Playwright Mike Lew is the latest young talent to win the prestigious annual Alliance/Kendeda National Graduate Playwriting Award, which comes with an Alliance production. Though his play shows tremendous promise in its humor, pacing and jaw-droppingly daring, defiant shrug at theatrical limitations and conventions, its central character and central questions can annoy rather than challenge or intrigue.

On a flighty lark, Penny accompanies four other cyclists on a ride to raise money for fighting cancer and imagines creating a life for herself in each state she passes through. Her imagination, however, seems depressingly and cloyingly limited. Ohio is the political “swing state,” so people there must be indecisive; everyone in Pittsburgh is a blue-collar steelworker; Kentuckians bet on the Derby and swig Maker’s Mark; and so on.

Jane Austen acknowledged that few readers would like the spoiled, willful, self-absorbed heroine of “Emma,” and I think “Bike America” attempts to tread a parallel path. But we are given little reason to care about the main character’s predicament, which is a search for a new life elsewhere. If we’re not charmed or amused by Penny, it takes some investment to take her problems seriously.

She is a Holly Golightly who seemingly can’t care about anyone or anything other than herself. She never aims to please others — there’s something admirable in that — but she ends up as not just hard to like but hard to know. For a character at the center of a play, we learn very little about her. Does she have parents? Siblings? Where did she grow up? She keeps saying that she’s “damaged.” Not that I disagree, but “damaged” implies a narrative, or at least a past, and it’s one we never hear about.

For audience members who find that they’re not invested in Penny, there’s not much “there” there. She is a self-absorbed, almost pathological narcissist who takes an arduous journey through a country of clichés. No wonder she’s so unhappy. The scene toward the end in which she learns that there are other people in the world with commitments and concerns and challenges is set up like the scene in “The Miracle Worker” where Helen Keller finally learns that the flowing wet stuff is called “water,” except that it’s not as moving.

With much eye-rolling protestation, Penny insists that she doesn’t represent her generation, but that is clearly Lew’s intention, in spite of whatever Penny might say about it. The words “millennial” and “Gen Y” appear in the play, and they seem to figure into the tensions and implications that identity can be as fluid as trying on different places for size. “Bike America” shares the self-consciously searching, broad outlook, and even the quirky humor, of Peter Sinn Nachtrieb’s “Bob” at Aurora Theatre, which I also didn’t like. But “Bob” seems to be resonating with audiences, so go figure: I admit I may be idiosyncratic.

There is, however, some undeniably wonderful and clever stagecraft in “Bike America.” Lew clearly has some fun ignoring theatrical conventions in a cheeky and daring way, leaving it to the director to decide how to stage scenes that take place on bicycles, to give us Memphis bridges and Arizona highways and New York streets on stage. The creative team, led by set designer Andrew Boyce and director Moritz von Stuelpnagel, does a fantastic job of bringing some challenging effects to life.

There’s also a fun, episodic pull to the narrative, a drifting but structured quality, that works well. The supporting cast is strong, especially Matt Nitchie as Penny’s long-suffering boyfriend. But some of that character’s shtick, such as chasing after Penny on a razor scooter, is far too cute.

Lew is obviously enormously talented. But I think too much here depends on our being charmed or intrigued by the difficult character of Penny, leaving a lot on DiGiovanni’s plate. The talented actress often seems to be left begging for our affection, attention and concern in a way that seems vaguely unfair.