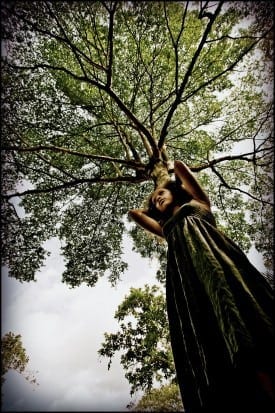 “Bold (feminine),” at Marcia Wood Gallery Midtown through November 14, is an exhibition of national and international women photographers making unconventional pictures of other women. Curator Constance Lewis has termed this a lighthearted rather than theory-heavy look at women unconstrained by traditional restrictions, but the conceptual freight of this visually compelling show is left up to the viewer to decide.

Ukrainian photographer Yelena Yemchuk sets the exhibition’s terms of engagement with a life-size portrait of a woman clad in a two-piece costume, surrounded by a ludicrously decorated room, who has literally been given the attributes of a plastic doll. But rather than appearing as an unambiguous social commentary, the peculiar skin sheen of this excessively stylized model reads as not just unsettling but uncanny.

The same cannot be said for Athens-based photographer Christy Bush’s array of diptych portraits of young women photographed in the same poses when clothed and naked. Although their postures and expressions are flat-footedly neutral, the varied reactions of discomfort evoked from viewers at the opening, where a number of the models were in attendance, would have been fodder for an entire monograph in any number of academic disciplines.

International fashion model and photographer Helena Christensen might easily be expected to produce standard-issue glamour, but her portraits are instead simultaneously alluring and alienating. A recent untitled nighttime image of a young woman standing alone next to a downscale vintage automobile betrays the influence of Gregory Crewdson, but Christensen has worked with some of the world’s most distinguished photographers during her modeling career, and has learned artistic strategies from all of them. Her most delightfully comic and compelling photograph came about by accident when a troop of soldiers marching out of formation came into the isolated scene where Christensen was engaged in a fashion shoot with Brooke Shields. The resultant image of a gaggle of men seemingly rushing towards Shields might be read as a commentary on the lifetime careers of both the celebrity artist and her celebrity subject. Josephine Sacabo’s darkly romantic tintype, gelatin silver and photogravure portraits of women reveal why this New Orleans photographer has been legendary for a generation. Reminiscent but not openly imitative of 19th-century precursors, they lend a much-needed breath of independently interpreted tradition to a show filled with unexpected departures.

Côte d’Ivoire photographer Joana Choumali is well represented in this exhibition by her stunning portraits of West African women, posed to communicate strength and independence without being unnecessarily allegorical. The woman who almost seems to become part of a tree in Nappy 2 is particularly powerful; the branches could be read as part of Choumali’s revaluation of hair, but the composition also suggests confident indomitability.

Brooklyn-based Melissa Zexter’s soft-focus images of women overlaid with intricate patterns of handmade embroidery round out the show with a strategy that acknowledges tradition and in some respects quotes from it, but which is also fundamentally subversive of that tradition.

One could say the same for the entire exhibition, a prototype collaboration between Wood and Lewis that is tentatively intended to lead to further ventures.