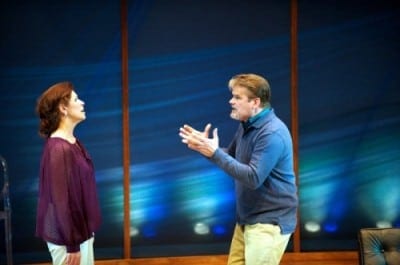 Review: “Body of Water” creates an ocean of mystery at Aurora Theatre

Tess Malis Kincaid and Mark Kincaid in “A Body of Water.” (Photo by Chris Bartelski)

The two lead characters in Lee Blessing’s “A Body of Water,” on stage at Aurora Theatre through February 12, both wake up one morning with no recollection of who they are. Avis (Tess Malis Kincaid) and Moss (Mark Kincaid) find themselves together in a pleasant vacation house surrounded by woods and water, with no idea about their pasts, how they got there or what their relationship to each other might be.

Under the direction of Freddie Ashley, who occasionally takes breaks from his role as artistic director of Actor’s Express to direct shows at Aurora, this unusual play is as compelling and engrossing as a good murder mystery. The principal actors (the Kincaids are married in real life) are able to make the two mysterious characters seem sympathetic, familiar and understandable, even if their situation is extreme.

Indeed, the audience is in the exact same situation as they are, grasping at the same little slips of clues and befuddled by the same compounding enigmas. The two characters might not know who they are. But in their affability, their particularities, their desire to make sense of strange circumstances, the skillful actors turn their characters into people we might know. That’s a crucial lure to draw us into what otherwise might be a remote and contrived story. Their banter takes on the sparring tone of a long-married couple, and Moss and Avis begin to piece together that they are (possibly, probably) married to each other.

Blessing is a master at alternating between dramatically concealing and revealing information, and the mystery only deepens when a third character arrives. Cara Mantella nails the part of Wren, who may or may not be Avis’ and Moss’ daughter or lawyer or nurse.

In a role that could easily have become merely an expository background foil in less capable hands, Mantella makes Wren a third object of our curiosity. Is she a helper or an antagonist? We’re never sure, but Mantella limns Wren’s smaller motivations in a perfectly lucid way from moment to moment. Annoyance, concern and impatience are easy to read, even as the character’s larger purpose and actual identity remain somewhat inscrutable. It’s an intriguing balancing act.

Those who seek literal explanations, who like for loose ends to be tied up, may leave this show frustrated. It’s a drama that’s somewhat in the “Twin Peaks” or “Lost” mold: we’re presented with a fascinating tangle of mysteries that draw us in, but then we’re left with many that are never unraveled. Some viewers will be excited to go along for the ride; others may feel they’ve been treated unfairly. (It’s a weird quality of the human mind: we’re delighted and fascinated by unanswerable mysteries, but also a little miffed by them.)

We’re left with Avis and Moss’ situation as a sort of philosophical and perhaps symbolic conundrum. Their situation — two people who repeatedly lose their memory every day for no discernible reason and are assisted (or perhaps antagonized) by someone who may or may not be their daughter — is so particular that it’s hard to take it as somehow universal.

Still, like “Twin Peaks” and “Lost,” “Body of Water” is entertaining and compelling. Moreover, it explores some thought-provoking territory about the connection between memory and identity. In the end, what audiences make of it will depend a great deal on how comfortable they are with ambiguity. Suspenseful, strange and marvelously crafted, the expertly made and intricate parts of “Body of Water” are beautiful to see in motion, even if, in the end, we’re mystified as to what the machine’s purpose might be.