Review: A period drama with all the trappings, “Belle” changes the narrative, upends stereotypes 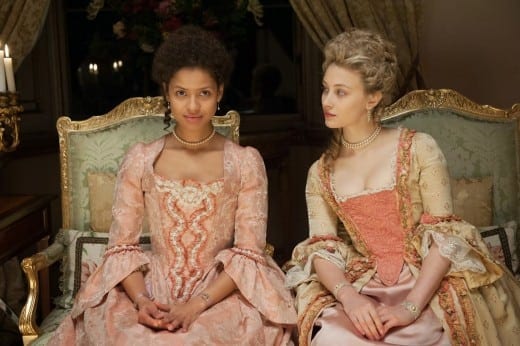 I fell in love with Gone With the Wind at first sight. The sweep, romance and epic storytelling appealed to my 10-year-old sensibilities so much that I wanted to live at Twelve Oaks. Then it dawned on me that even if time travel were a possibility, hoop skirts, parasols and bonnets would not have been in the cards for a girl like me, because I would have been born into slavery.

First impressions being what they are, however, Gone With the Wind remains my all-time favorite movie. But following the recent successes of films starring African American actors as maids, butlers, slaves and general-purpose receptacles for other people’s trash, my tolerance for the genre had ebbed.

The film is based on a real-life character named Dido Elizabeth Belle, who was the daughter of an enslaved African woman and a British naval officer. After her mother’s death, Belle was placed in the care of her great-uncle, Lord William Murray, first Earl of Mansfield, who raised her as a gentlewoman at Kenwood House, just outside of London. Murray and his wife were raising another niece, Elizabeth Murray, by the time Belle joined the household, and the girls were immortalized in a portrait that hung in their childhood home from 1779 until it was moved to Scotland’s Scone Palace in 1922. 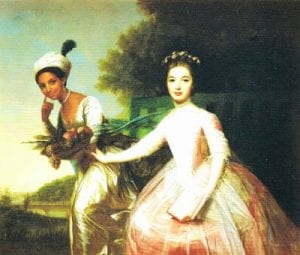 The painting, attributed to German neoclassical painter Johann Zoffany, is considered groundbreaking not only for the vivacity in Belle’s facial expression and body language, but also because her eye line falls on a parallel plane with that of her cousin– a practice that was unheard of at the time given the fact that Belle was black and Elizabeth was white.

Amma Asante, who directed Belle, says Zoffany’s portrait inspired the making of her film. But the seeds for storytelling were sown much earlier for the self-described “devotee of all things Jane Austen.”

“Gone With the Wind made me want to make movies,” Asante said in a recent email exchange, “but it also made me want to change the narrative. I made Belle for every little girl who ever got lost in the romance of cinema and deserved to see themselves reflected on the screen.”

Rendered like an 18th-century oil painting, Asante’s film is a visual masterpiece that examines the notion of perception: from how it can be shaped and sustained in our minds to how easily it can be projected onto a subject based purely upon conjecture, habit and misinformation. The film also examines the lives of characters who don’t align with the narrowly defined roles assigned to them by society — whether predicated upon sex, race, marital status, wealth or class — and how they reconcile those constraints.

A metaphor for the overarching theme of ill-fitting roles is introduced early in the film when Belle encounters a portrait of an aristocratic Englishman with a slave boy. At first, her response is one of naked curiosity. But as the years pass and the experience repeats itself, she grows weary of the incessant depictions of brown people as subservient to white people in art. Eventually, it dawns on our heroine that her noble bloodline and proximity to wealth will never trump the rules of society, so she learns to negotiate the razor’s edge where her lineage and race intersect with her humanity constantly hanging in the balance– depending upon the company she keeps.

Belle’s vulnerability notwithstanding, she is not a victim. She is quick-witted, sharp-tongued, well read, refined and cultured. She is also a bona fide beauty — swaddled in silk brocades and pearls — whose mastery of the King’s English is as pitch perfect as her rendering of a piano sonata by Mozart or Bach. Yet for all her mastery of these social graces, she is not above perpetrating the sins of her white forefathers when dealing with servants of lower birth who live and work at Kenwood House.

Like Belle, every character in the film is a study in shadow and light. Her Uncle William, played by Tom Wilkinson, loves his great-niece “as if she were born to me,” but even such profound affection fails to buttress his moral convictions where larger issues of race and human rights are concerned. 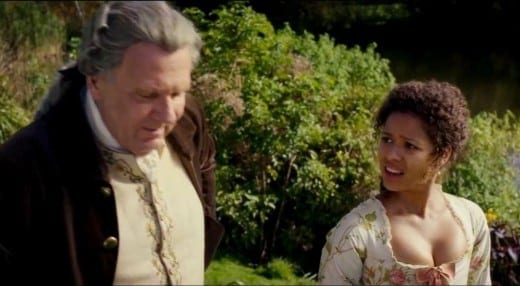 Likewise, Belle’s spinster aunt, Lady Mary Murray, is a study in both sharp edges and motherly love. Played to perfection by Downton Abbey’s Penelope Wilton, the actress’s gift for conveying deep emotion with the slightest arch of an eyebrow or almost imperceptible twitch at the corner of her mouth is impressive in its economy and impact.

Lovers of period films will fall under the spell of Belle’s elegant interiors, baroque costumes and strict protocols. But Asante breathes new life into the genre by casting as Belle the graceful and luminous Gugu Mbatha-Raw, who simultaneously honors the tradition and changes the narrative.

Belle is as remarkable for her impeccability and intelligence as for the absence of self-loathing, slang, histrionics, drab clothing, mournful soundtracks, back-breaking labor, sweaty brows, unanswered prayers and other stereotypical expressions common in films offering an “authentic ethnic experience.” And good riddance: such aural, visual and psychic cues are no more accurate today than they were when Belle came to understand that people’s perceptions of her had precious little to do with herself, and everything to do with the beholder.

A classic beauty with brains, Belle’s appeal is anything but skin deep. And the same must be said of Asante’s elegant direction, her facility for upending stereotypes and tropes without lecturing or pontificating and her mastery of  nuance, multidimensional story lines and character development. The director also deserves high marks for her restraint and refusal to cast broad-stroke characters — who are either all-good or all-evil — freeing her audience to reach its own conclusions without feeling manipulated.

Belle’s bottom line at the box office will probably determine whether Asante’s style becomes a template or remains an anomaly in filmmaking. But her original perspective will challenge studio executives to at least think before releasing the next paint-by-numbers portrait of any people on film– giving more and more movie-lovers an opportunity to actually see themselves reflected on the silver screen.

This review is an adaptation from O’Neill’s The Gaily Planet blog post, “What Light Through Yonder Window Breaks?”

Hollywood is only a reflection of the larger culture, as demonstrated by Chimamanda Ngozi Adichie’s TED talk, David Brooks’ recent New York Times column on Africa and this satire in Granta.