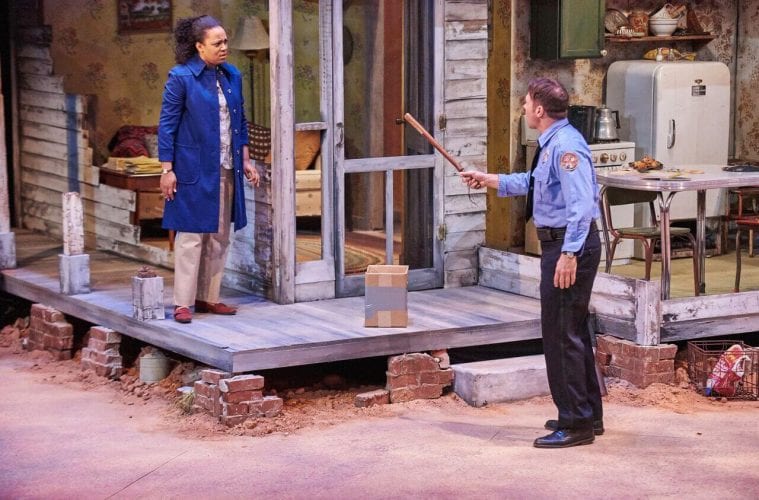 Review: Aurora’s “Split in Three” has its moments, but has plenty of kinks to be worked out

With some reliably talented performers in its cast, a competent, versatile director at its helm and rich material to play with, it might seem like the drama Split in Three — running through May 28 at Aurora Theatre — could be a slam dunk. It definitely has some fine moments, but the result overall is a show that too often wavers back and forth in tone and quality.

Written by local playwright Daryl Lisa Fazio, Split in Three takes place during the Civil Rights Movement of the ’60s. In Mississippi, one of the final schools in the nation to integrate is about to do so — and many of the townspeople are not reacting well.

Nola (Courtney Patterson) and her sister Nell (Rhyn McLemore Saver) are a poor pair living in a small Mississippi house. Nola cleans toilets in a hotel while Nell works in a beauty parlor. The two are different — Nell is a Bible-quoting racist, while Nola is more open-minded to what is going on. Phone calls to their house from someone the sisters believe to be just a heavy breather turn out to be from a young woman who claims they share a father and that she is a half sister to Nola and Nell. When that character — Penny (Falashay Pearson) — arrives late in Act I, the sisters (especially Nell) are startled to learn that she is half-black. The big reveal is not much of a surprise, though the script acts like it is.

The cast of characters is rounded out by Aurora regular Travis Smith as Tucker “Tuck” Tackett, a cop who is admittedly taken aback by the whole situation happening in town, and by Elijah Marcano as Clifford, a young boy alarmed by the racism around him and looking forward to life in college, away from home.

The play really is less about segregation as a whole than about the individuals it affects, primarily its central trio. Split in Three had its world premiere at the Florida Repertory Theatre in 2015, and this is only the second production. Justin Anderson directed that premiere, and he directs here as well. He and his crew capture the era sufficiently, from the music to the clothes. The set by Jamie Bullins is a run-down shack, shared by the sisters, with an old decaying truck in the background.

Fazio wants this to be a comedy drama, and the show at times tries for laughs, not always successfully. A sight gag with Penny walking around innocently in a white bathrobe doesn’t seem very logical.

The playwright’s script has some terrific elements. The character of Penny, in particular, is beautifully drawn. Penny is not what her sisters envisioned — she is educated, with two degrees, and a thoughtful, eloquent speaker. But she is also very lost and out of place. Back home in Chicago, surrounded by white coworkers, she never feels part of their group. The play’s most successful scene is a hushed one where Penny and Nola get to know each other better.

Yet other moments aren’t that sublime. Fazio’s work is rather unbalanced. It can feel didactic and far from subtle. When Clifford suggests he might be willing to fight for his country, Nell tells him “it’s a war there, Clifford” — and shots rings out not far off, letting us know that their home is a war zone too. While a central scene between Penny and Nola is crucial, a lengthy follow-up sequence between Penny and Nell is just not very convincing. As well, a resolution comes too easily, and some of the characters change rather abruptly.

The acting ranges from the exquisite to the forced. The men have some nice moments, but this is really a show about the women. Patterson clearly enjoys the opportunity to play somewhat against type. It’s a very low-key performance that sometimes screams out for more, but her restraint is admirable. She makes the chain-smoking Nola a real character. Alas, Saver tries too hard and never really nails the role of Nell. Her accent borders on the broad as well.

By far the most dynamic performance is by Pearson, who brings a lot of dignity to the role of Penny. It helps that her character is the most dimensional. Despite what is happening around her, she isn’t an activist. In fact, she’s only been to one civil rights march. She is all about trying to find her place in the world. Her confusion and longing — for something — is wonderfully conveyed. The actress has been onstage a lot lately — including a turn in Actor’s Express’ snappy The Legend of Georgia McBride — and she is terrific here. If the production as a whole was as heartfelt and balanced as Pearson’s performance, Split in Three would be a major work rather than a fractured one. Let’s hope Anderson and Fazio can work out its kinks for the next engagement.