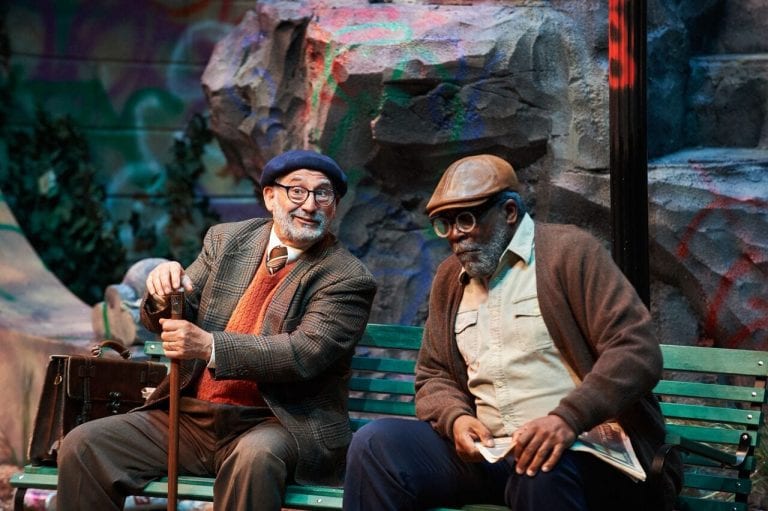 It’s not often that actors can reunite in a play 27 years later and portray the same roles, but that is what’s happening currently with Aurora Theatre’s new rendition of I’m Not Rappaport. Kenny Raskin and Rob Cleveland both headlined a 1989 production staged at Theatrical Outfit and now they are sparring again onstage. Ironically, David de Vries — who also co-starred in that version — is directing. The play has gathered a bit of dust since its inception more than 30 years ago but the actors makes this production a genial-enough evening.

I’m Not Rappaport was inspired by two friends observed by playwright Herb Gardner at New York’s Central Park. As the play opens, two elderly men, Nat Moyer (Kenny Raskin) and Midge Carter (Rob Cleveland), sit in a park together. Nat, who is Jewish, talks — and talks and talks. He loves to spin tales and what comes out of his mouth is rarely the truth. Midge, an African-American who is half blind but still works as the superintendent of an apartment home, has his own stories to tell and complaints to lodge.

He pretends to not care for Nat but the two obviously enjoy each other’s company. They certainly have a lot in common, especially as they escape the reality of having to deal with some personal matters. Over the course of a few days, a number of people interrupt their cherished park routine — Nat’s daughter Clara (Wendy Melkonian), who wants him to go to a senior home where he can be looked after, and Danforth (Dan Triandiflou), who wants to cut Midge’s job. The others who crisscross Midge and Nat’s world are a young thief (Benjamin Davis) and a cowboy (Marcus Hopkins-Turner) who is chasing a young woman (Brooke Owens). Some of these characters are better etched than others — Davis’s menacing bad guy isn’t convincing at all.

I’m Not Rappaport (the title of which comes from a vaudeville gag) won the Tony Award for Best Play back in 1986, and its star Judd Hirsch was named Best Actor, but it’s not staged with much regularity these days. (A film version with Walter Matthau and Ossie Davis came out in 1996 and a New York revival opened in 2002 with Hirsch, but didn’t last long).

The work hasn’t aged terribly well. Gardner’s dialogue can seem precious and Neil Simon-like, often content to substitute one-liners for character development. It has a Lifetime movie feel, dealing with such themes as aging and how society writes off people after a certain period in their life. Having said that, these two actors manage to create real characters.

Their comfort level with each other is clear. Cleveland is a likable presence and his charisma cuts through Midge’s cantankerous nature. He also gets to show off his expert comic timing.

Yet this show belongs to Raskin. Based out of Massachusetts, the actor has performed on Broadway, as well as regionally, and in Cirque du Soleil work. Nat starts off as that horrible cliché — the lovable, wise-cracking elderly man — but Raskin turns it into something deeper. His body is fading but his mind can be sharp as a tack. Eternally optimistic, he tries to talk or negotiate his way out of anything, quick to invent situations. The way that he is able to intimidate the younger Danforth is the play’s most satisfying moment. Raskin’s performance feels lived-in and genuine.

The set by Isabel and Moriah Curley-Clay is particularly beautiful. A long bridge hangs over a park, with a few benches below, one falling apart, and graffiti is present almost everywhere. The location is placid one moment and dangerous the next, especially for elderly, defenseless men.

As a director, de Vries lets the production drag somewhat. Both acts feel longer than they need to be, but he makes the major moments count.

Coming off such a successful one-two punch with Wit and Into the Woods, I’m Not Rappaport feels a little safe and soft for Aurora. And retro. But in the hands of these two actors, it’s a fairly entertaining diversion.