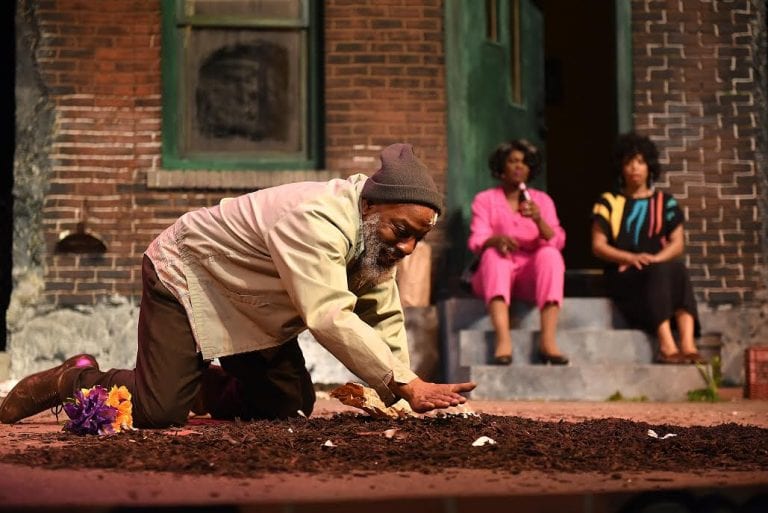 August Wilson’s grim tragedy King Hedley II is currently having a fine production at Atlanta’s True Colors Theatre, on stage through March 11. It’s a moving play that offers a slow, simmering buildup (some would say — perhaps fairly — a dull buildup) that leads to an explosive and inarguably effective ending.

King Hedley II tells a long story — the running time is nearly three hours — and that story is actually a small part of a much larger one. The play is one piece of Wilson’s famous Pittsburgh Cycle of ten plays, sometimes called the Century Cycle for the way in which each play depicts the African American experience in one decade of the 20th century. The chronological story begins with Gem of the Ocean set in the 1900s and ends with Radio Golf set in the 1990s (the order in which Wilson wrote the plays is very different than their chronological order, however).

The plays tell a broad, sweeping story of life in the 20th century, primarily, though not entirely, set in Pittsburgh’s African American Hill District. The plays are deeply linked thematically but only sometimes narratively: characters occasionally appear in more than one story, but each play also stands independently. The most famous include Fences written in 1987 and set in the 1950s, Joe Turner’s Come and Gone (1988) set in the 1910s, The Piano Lesson (1990) set in the 1930s and Ma Rainey’s Black Bottom (1984) set in the 1920s.

Those plays are especially effective on their own. In order to enjoy them, a viewer wouldn’t even need to know that they’re looking at a small piece of something larger. But King Hedley II is somewhat unusual in that its narrative is more directly connected to other parts of the cycle; indeed, at times, we feel we’re watching the ultimate outcome of events from another play.

In the play, Hedley II (Neal Ghant) is an ex-con hawking stolen refrigerators with his friend Mister (Eugene H. Russell IV) in an attempt to raise enough money to open a video store. One of the play’s most central and effective images — the part of the play most viewers remember vividly — is that Hedley is trying to grow seeds out of a tiny, ugly, dried-up patch of ground. Everyone tells him that nothing good will grow in that kind of dirt in the middle of a slum, but he’s convinced that dirt is dirt, and seeds will grow there. It’s the sort of metaphorical, plainly symbolic trope that in almost any other writer’s hands would seem irksome, but somehow Wilson manages these things so well we end up liking them.

Hedley lives with his wife Tonya (Tiffany Denise Hobbs) and his mother Ruby (Tonia Jackson) who is reconnecting with a former flame, the slick con-man Elmore (E Roger Mitchell).

Much of the play’s backstory — both personal and wide-sweeping — has already taken place when the action begins. Often in King Hedley II we end up watching characters talk about important events which have taken place, or else are taking place offstage, rather than enacting them onstage, which can justifiably be identified as a problem of the play. Still, the language is extraordinary; fortunately, Wilson writes effectively about people recounting the past, and he also knows the ways in which the past — recounted or not — can shape and alter lives in the present.

Though violence rears its head elsewhere in the cycle, widespread gun violence becomes a timely and major element of King Hedley II. Even in moments of calm, everyone has a gun, or is buying one, or is selling one, and we’re told that there are so many senseless gun deaths in the neighborhood now that not even the undertaker can keep up. The tone of plays in the Pittsburgh Cycle can vary, but the world of King Hedley II is deeply harsh and pessimistic.

Ghant makes an effectively driven and believable Hedley, and scenes with Mitchell as Elmore work especially well; it’s clear from Elmore’s first entrance that the two men share a lot in common, but maybe too much, and we detect that there’s actually some crucial difference in moral outlook between them that will come to a head.

In the end, viewers will probably experience King Hedley II as a play in which a lot has happened before the lights come up, and something momentous happens just before they go down. In the interim, we get a quiet, slow-burn, which can at times feel stagnant. As the character Stool Pigeon says: “The story’s been written. All that’s left now is the playing out.” Perhaps that feeling is something of Wilson’s point, that the pervasive mood of urban poverty in the 1980s was one of paralyzing stasis; those experiencing it were trapped in historical and social circumstances not of their making, left to question whether anything at all could ever grow in that neglected patch of ground. Most audience members seemed on board for the story’s unusual ride, but a handful of viewers, not inexplicably, departed at intermission.

Perhaps audience members who come expecting another Fences will be disappointed, but thematically and narratively, King Hedley II does occupy an interesting spot in a larger, intriguingly intricate narrative. The play’s strategy of a slow buildup to an explosive end may seem questionable, but the devastating outcome leaves no doubt as to the power of what’s been said.