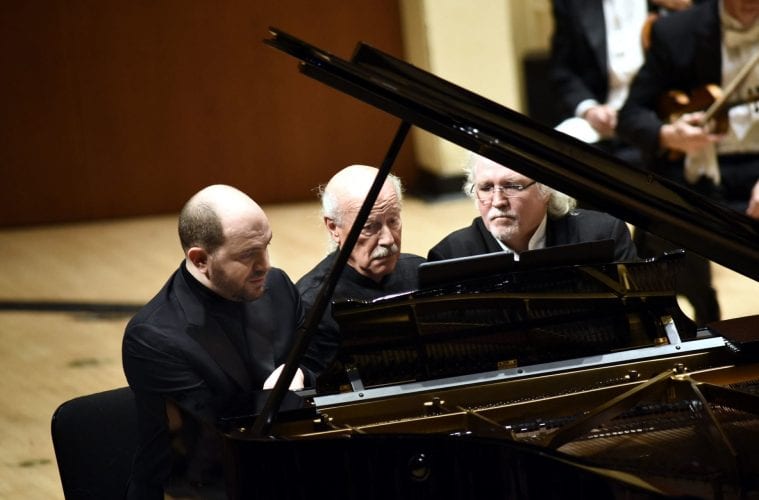 Review: The Atlanta Symphony presents the unexpected with Neikrug, Tchaikovsky and Shostakovich

On Thursday evening at Symphony Hall, the Atlanta Symphony Orchestra performed a concert of music by Neikrug, Tchaikovsky and Shostakovich, led by principal guest conductor Donald Runnicles, and featuring pianist Kirill Gerstein as featured guest soloist. The program will be repeated on Saturday evening at Symphony Hall. Both of this week’s ASO subscription concerts are dedicated to the memory of Reverend Dr. Martin Luther King, Jr., and his life, legacy and achievements. The program was a rather long but successful mix of something new, a twist on the familiar, delightful surprise and a massive sonic essay from a post-Stalinist Soviet Union.

The concert opened with a world premiere: “The Unicorn of Atlas Peak” by Marc Neikrug (b. 1946), a piece co-commissioned by the Atlanta Symphony and the Grand Teton Music Festival, of which Runnicles is music director. The title refers to a mutual friend of Neikrug and Runnicles, John Kongsgaard, a noted Napa Valley California winemaker who introduced them to each other, and to whom the work is dedicated.

While Neikrug is certainly not a household name among Atlanta audiences, he has enjoyed a long international career as a multifaceted artist. Primarily a composer, he is also active as pianist, conductor and administrator. For 35 years he was violinist Pinchas Zukerman’s collaborative pianist in numerous recitals and recordings. Additionally, Neikrug was composer-in-residence with the St. Paul Chamber Orchestra for seven years, and since 1998 has been artistic director of the Santa Fe Chamber Music Festival. Still, Neikrug has remained off the radar of the new music scene’s front lines.

Neikrug’s 10-minute work, “The Unicorn of Atlas Peak,” has the overall feel of a style and musical aesthetic that was at its height in the 1970s – well crafted, with detailed attention to line, shifting timbres and textures and composite color. The work’s opening note is played by a deliciously intriguing combination of contrabasses bowing a harmonic, cellos plucking the same as a harmonic, plus low flutes. It’s a piece that might be a little intellectually distant for those more accustomed to the traditional symphonic canon or the more accessible and eclectic music styles in vogue. For those who do connect with it, whether through intellect or intuition, it is a credible kind of sonic foray we don’t often get to hear anymore in this city – though we should.

The music proceeds in accumulating and dispersing layers of sound, which the composer describes as akin to “the way we see clouds move across the sky,” at differing apparent speeds, obscuring or revealing one another in their passing. This observer would also deem fair a comparison with an interweaving of threads, where the threads themselves are multicolored. Neikrug himself describes the work’s conclusion as unusual, but it did not seem out of place or strange, though the arrival at the end felt a little unexpected. Pyotr Ilyich Tchaikovsky’s Concerto for Piano and Orchestra No. 1 in B-flat Minor features one of the most famous opening themes in all of classical music. While long a part of the symphonic canon, it came to widest popular consciousness when a young Van Cliburn’s recording for RCA Red Label featuring the tune became the first classical album to go platinum, and eventually triple-platinum. For more than a decade, it remained the bestselling classical music album in the world. However, what Van Cliburn recorded may not have been entirely as Tchaikovsky intended. It was from the most widespread, commonly used edition of the Concerto available – but a posthumous one – considered the work’s “third version.”

One of pianist Kirill Gerstein’s passions is trying to present how Tchaikovsky actually intended the piece to be performed, based on the score of the “second version,” which is the one Tchaikovsky himself conducted and which differs is some significant ways from the version most fans know. Most observably, those famous opening piano chords: instead of being crashing block chords, they are arpeggiated and marked less loudly (only forte rather than fortissimo). The salient difference is less bombast, more lyrical, though Gerstein’s performance remains muscular, as did Runnicles’ forward-moving take on the orchestra’s part. The entire performance proved a fresh, alive and exciting rendering of the well-worn work, versus a typical run-of-the-mill walk through familiar fields.

The encore that followed was a big surprise, and not a solo, as Gerstein, Runnicles and Neikrug all came back on stage and performed together Rachmaninoff’s “Romance” from “Two Pieces for Piano, Six Hands” (1891, and absent any opus number). The piece is a tuneful romantic work, hardly an earth-shaker, but an amiably novel opportunity for these three artists to collaborate and delight the audience. And frankly, that kind of relationship between performers and audience is a special piece of what encores are about.

The concert closed with the nearly hour-long Symphony No. 10 of Dmitri Shostakovich. Completed after the death of Joseph Stalin, the mostly dark, brooding work brought forth a mocking second movement (which is often associated in retrospect with the composer’s view of Stalin himself) but ultimately a sense of victory. Perhaps it was a sense of the composer’s personal triumph at outliving his nemesis, or perhaps something larger: one of the creative human spirit over dictatorial, authoritarian forces of all kinds.