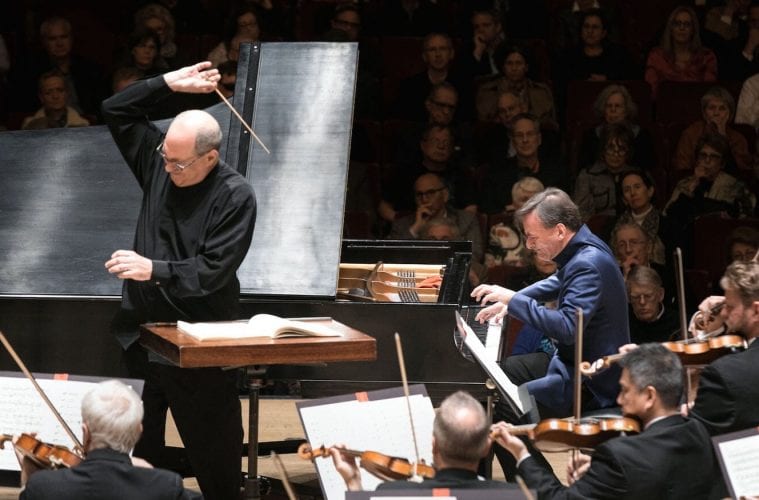 Review: The ASO and Stephen Hough shine with an all-Rachmaninoff program

On Thursday at Symphony Hall the Atlanta Symphony Orchestra, led by music director Robert Spano, performed an all-Rachmaninoff concert, with pianist Stephen Hough as featured guest soloist. The program will be repeated on Friday evening at Symphony Hall, then again on Saturday evening at the Lucas Theatre in Savannah, Georgia, as part of the Savannah Music Festival. A fourth and final performance will take place on Sunday afternoon at Hodgson Hall, on the University of Georgia campus in Athens.

Let me precede this review by addressing a particular peeve: the spelling of the composer’s name, “Rachmaninoff.” (Yes, that’s with “ff” at the end, not a “v”.) There are multiple reasons for spelling it that way, but there is one most definitive: “Rachmaninoff” is the legal form in the United States, the spelling that is on the composer’s citizenship papers. (Sergei Rachmaninoff became a US citizen on February 1, 1943, two months before his death.) So while the Brits may opt for “Rachmaninov” as the fashionable transliteration du jour, I am spelling “Rachmaninoff” here as it ought, de jure, in this America, that in the very end became his adopted homeland.

Thursday’s concert opened with Sergei Rachmaninoff’s “Vocalise” – an icon of “popular classical” repertoire. It was originally written as a song without words for high voice and piano, published in 1915, the last of his “Fourteen Songs,” Op. 34. Because of the tune’s immense popularity, it has been transcribed for numerous other combinations of performers, including this orchestral version, arranged by the composer himself.

This arrangement, published in 1919, is exactly like Rachmaninoff’s transcription for solo voice and a moderate-sized orchestra except that it calls for a group of 16 to 20 additional violins playing the vocal line. In this performance, the ASO’s entire first violin section was featured as “soloist” on the elegant tune. It is an unusual arrangement in that respect. Despite the popularity of “Vocalise” itself, this particular version had not been performed by the ASO in a subscription concert since 1958 – almost 60 years.

Rachmaninoff is a master of extended melody, for certain. Were that his only musical asset, one might easily imagine a whole concert of nothing but Rachmaninoff being like spending an evening covered with liquid chocolate. But that is not the case, for Rachmaninoff can also wrap that particular gift within the music of great momentum, virtuosity and power, in the context of large and convincing musical architecture.

That was borne out when Hough joined Spano and the orchestra onstage for Rachmaninoff’s Piano Concerto No. 1. Although it was originally written when the composer-pianist was 18, it was revised considerably in 1917 when he was 44. That tightened, revised form was brought before the general public only after Rachmaninoff’s second and third piano concertos had become familiar works. Although it is less popular than either the second or third piano concertos, it is no less worthy of performance.

Interestingly, Hough chose to play an older New York Steinway that the ASO owns rather than the newer instrument typically used by piano soloists. This was actually an astute choice on Hough’s part. It is less bright in demeanor, and Hough was able to achieve a warm, well-rounded singing tone in the treble ranges without brittleness, and in the lower ranges, good depth, with a little growl and grit, but without muddiness. There was “body” to the overall sound that stood well against the orchestral textures. In short: more what I would imagine Rachmaninoff to ideally sound like. What the audience got from both soloist and orchestra was a splendid, virtuosic performance that held the attention and captured the best of the music’s inherent character.

Spano and the orchestra closed the concert with the “Symphonic Dances,” Op. 45, Rachmaninoff’s last composition, and the only one composed entirely while living in the US. As such, it fittingly marks the final compositional point in Rachmaninoff’s long self-imposed political exile from Russia, which began at the end of 1917, after the Bolsheviks ascended to power – the same year he revised his Piano Concerto No. 1 – even though the journey’s finality would come with obtaining American citizenship just before his death.

The “Symphonic Dances” are clearly signature Rachmaninoff but show a noticeable development and cultural absorption within the context of his style. Formal and harmonic elements lead one to wonder how much of “America” Rachmaninoff soaked up over the previous decades. Whether that speculation can easily be answered or not, the “Symphonic Dances” makes for an engaging orchestral set, wonderfully performed in this concert. Spano and the ASO recorded it in June 2011 for a CD released later that year on ASO Media.