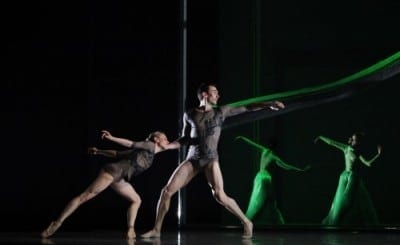 Of the three works in Atlanta Ballet’s “Ignition: New Choreographic Voices,” one of them scored a hit with its audience.

"Home in 7," the most compelling new work in Atlanta Ballet's "Ignition." (Photos by Charlie McCullers)

Atlanta Ballet plans to offer a concert like this every spring, part of a new focus on nurturing the next generation of American choreographers and attracting younger ticket-buyers while building a repertory that’s distinctive to the company and to Atlanta.

Seiwert’s “Home in 7” stood out from the others, probably because Royon and Patterson are at earlier stages in their careers, and it takes time to master the craft. But because Atlanta Ballet’s dancers are strong and versatile, every piece featured stunningly beautiful moments and was masterfully performed with a generosity and an intensity of commitment that has become par for this company within the past year.

That commitment to innovation is clear in Royon’s “Flux,” a vision of human dignity and grace in a contemporary world where the electronic pulses of cybertechnology have become integral to daily life. With the work’s visual effects, Royon and his collaborators successfully carried out a simple intention: to “elate the senses.”

A scene from "Flux."

Like “me in your fall,” a Royon duet that was staged by Atlanta Ballet a year ago, “Flux” took place in an urban setting. Dancers wore street clothes in purples, teals and grays. Socks (but no shoes) reduced friction and aided fluidity. Rodrigo Ribeiro’s video projections showed a high stone wall and dancers moving close together, shards of light suggesting needles’ eyes, bursts of color like distant supernovas and points of light bouncing off one another like subatomic particles.

To a sometimes static, often frenetic pulsating electronic score by Son Lux (Ryan Lott), movement flowed through the dancers like electricity. Feet traced circles on the floor. Sliding, swooping turns sent rebounding impulses spiraling up through the body. Spark-like movements burst outward through the fingertips as dozens of lighting designer Joe Doran’s narrow golden beams dropped down from the flies.

Though the transitions between sections were less than organic, Royon’s vocabulary, influenced by José Limón modern dance technique and William Forsythe’s improvisation, is refreshingly original.

More puzzling, Gina Patterson’s “Quietly Walking” (photo above) wrestled with the relationship between Man and Nature, more or less symbolized in a series of duets that had little to do with the opening’s angry commuters or the three women in long emerald green dresses whose reason for being was never fully explained. They looked like forest muses or wood nymphs as they stood beneath Jorge Gallardo’s beautiful giant tree branch that reached across the rear of the stage.

What might have symbolized a tenuous relationship between city and forest seemed more like an on-again-off-again love affair, repeated by different couples, sometimes with a second woman shadowing behind. The first woman would pull the man in, then yield sensually into his increasingly possessive embrace. She’d reach away and then leave him, only to turn and run back into his arms. Supported, she would tread the air. They would break up, get back together and so forth.

Eric Midgley’s sound design, filled with natural sounds and soft piano and violin, maintained a slow pace, fortunately broken by the dancers’ emotional dynamism. The performances were exquisite, the dancers’ bodies sculpted with Robert Hand’s gold and silver sidelight. The choreography itself, though organic and flowing, lacked clear intention and hovered dangerously close to cliché. 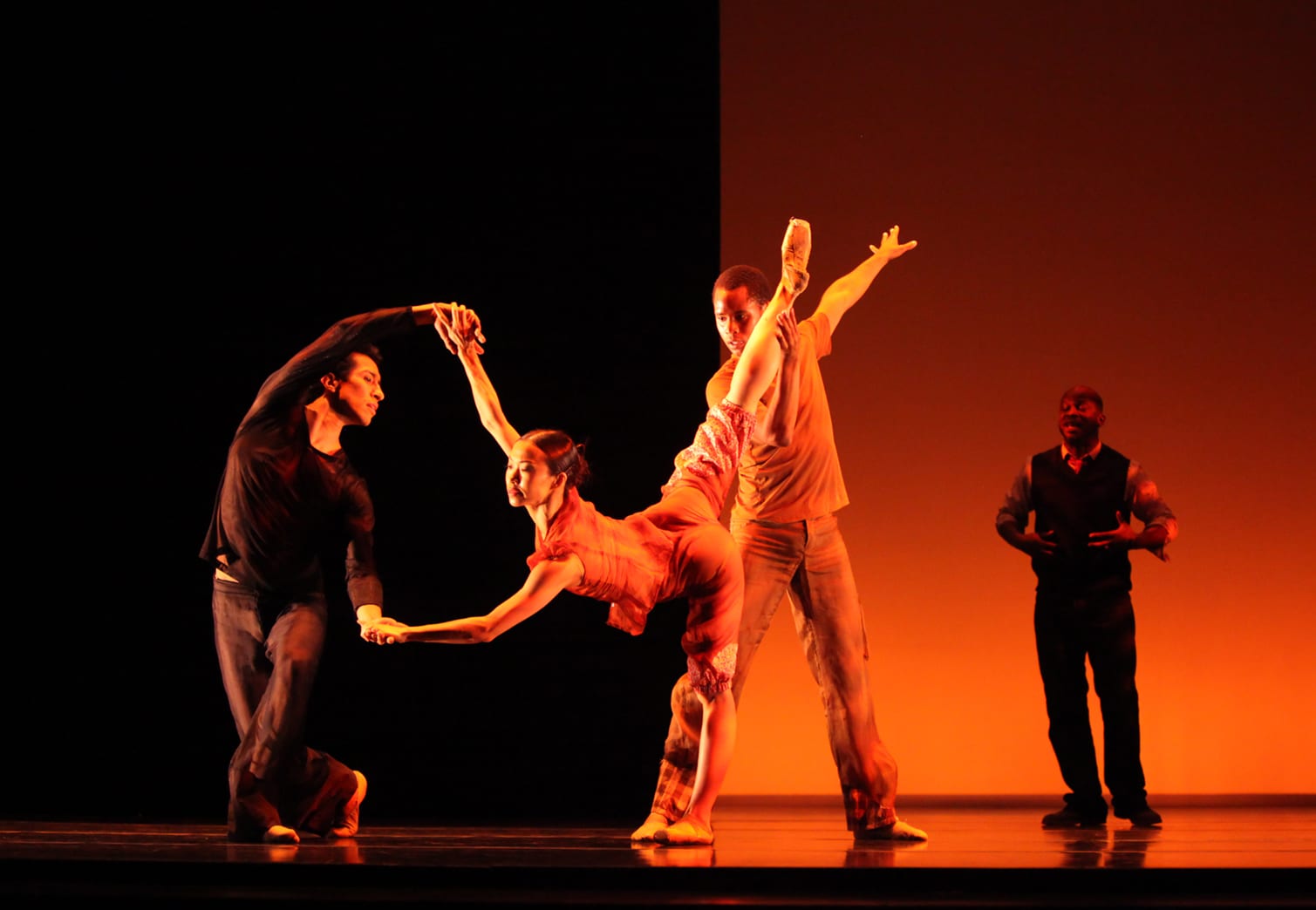 Modern dance set to poetry is not uncommon. In the 1940s, Pearl Primus danced to Louis Allen’s “Strange Fruit” as young Horton Foote narrated the poem about a lynching. But ballet set to poetry is rare. Even rarer is collaborative work as synergistic as “Home in 7.”

Mutual respect appeared to be the basis for the evening’s most sophisticated work. Of the three collaborators, no artist overshadowed the others. Amy Seiwert’s highly physical movement style blended with Daniel Bernard Roumain’s score, a fusion of classical, hip-hop and electronica. Spoken word artist Marc Bamuthi Joseph’s poetry expressed one man’s memories of coming of age in Atlanta and sifted through some of the lighter and darker chapters in the city’s history.

Seiwert’s style was a welcome contrast to the previous work’s hypnotic flow. “Home in 7” sported clean, extended classical lines, a clear-cut sense of body shape in three-dimensional space, rich imagery and, not least, imaginative configurations of partners. Seiwert’s bold, sharp, kinetic style was attuned to rhythms of music and verse. Her movement met Joseph’s imagery but avoided interpreting the words too literally.

Joseph performed on stage as the story unfolded, reflecting on his past, on the baseball team he admired, on the soft allure of Southern belles. In one of the evening’s highlights, Tara Lee, Pedro Gamino and Deonté Hansel danced the trio “Red Clay” with physical tension building among the trio as water became scarce under threat of environmental crisis. At the center was Lee’s glowing, resilient power.

“Atlanta Child” confronted a dark chapter in the city’s history, the infamous serial child murders during the late 1970s. Not an easy thing to face. But these artists faced it, named it and then emerged, unified and triumphant.