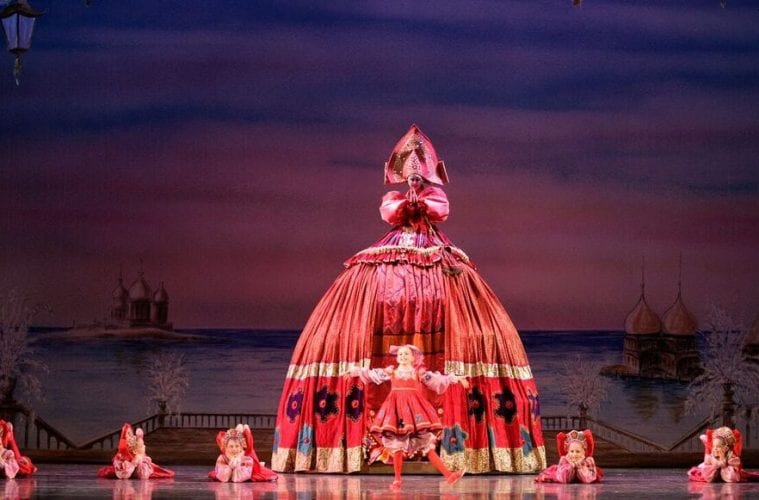 Review: “Atlanta Ballet’s Nutcracker” sparkles with flair and energy as a holiday must-see Atlanta Ballet’s Nutcracker is filled with a newfound urgency due to the upcoming retirement of artistic director John McFall. (Photos by Charlie McCullers)

In some cities The Nutcracker tastes like stale fruitcake: a necessary holiday staple endured for the sake of tradition. Thankfully, Atlanta can breathe a peppermint-scented sigh of relief. Atlanta Ballet’s Nutcracker, this time around, is as fresh as a just-cut spruce tree, as comforting and sweet as warm apple cider.

On its 20th anniversary, Atlanta Ballet’s Nutcracker reflects the many artists who have shaped and nurtured it. In part thanks to artistic director and choreographer John McFall’s relentless attention to detail and his refusal to let the holiday classic coast on its formidable reputation, this year’s rendition sparkles.

It was the strongest Nutcracker I’ve seen in years. Joyously danced by Atlanta Ballet company members and students alike, the production marks the end of an era and a leap into the unknown. McFall, whose version of The Nutcracker has generated $38 million in revenue since its debut in 1994, will step down at the end of the 2015-16 season. His successor has not yet been named. At a post-show reception honoring McFall’s many years of service to the ballet, dancer Christian Clark spoke of the artistic director’s supportive, collaborative leadership style. “John gives us the freedom to be ourselves,” he said, “and that helps us grow as artists.”

That spirit of exploration showed. Even though some have danced these roles many times, the company members delved into their characters with gusto, and the audience loved it. Heath Gill, faceless as the Rat King, delivered a fiery, inspired performance despite a cumbersome costume. The mischievous rats, also faceless and sleek in gorgeous chocolate brown unitards, moonwalked and krumped to peals of laughter from both kids and grown-ups.

Tara Lee and Jonah Hooper, stunning in the Arabian duet, demonstrated why veteran dancers are so integral to a ballet company. Younger dancers can aspire to achieve their nuanced musicality and shared command of the stage. As the keeper of the evening’s narrative through line, Alessa Rogers brought a charming, childlike wonder to Marya, a role normally danced by an actual child.

Full disclosure: I hate when adults pretend to be children on stage. Most of the time, they present a dumbed-down, one note version of childhood, ignoring the obvious fact that children are complex, emotional human beings. McFall’s version appeals to kids, but not at the expense of adults.

By choreographing the role for a technically gifted, mature dancer like Rogers, McFall makes the childhood experience powerful and elevates the entire production. Ultimately, The Nutcracker is a story about and for children, and McFall clearly respects them.

The party scene in Act I, which, for lesser productions provides a viable reason to arrive 20 minutes late, featured intricately crafted choreography and seamlessly integrated moments of characterization without a lot of pantomime. Young students tackled it with as much seriousness as the adults, a testament to the quality training at Atlanta Ballet’s Centre for Dance Education.

McFall knows how to move a storyline through movement and, most importantly, his latest production isn’t childish. Gone are the pandas and dancing pigs of years past, replaced with the kind of musically complex, effortlessly executed choreography we all came to see. Though it’s such an impressive effect, I hardly noticed the falling snow at the close of Act I. By then, I was already captivated by the onstage Snowflakes, danced by the talented Atlanta Ballet fellowship students who weaved through intricate patterns with sparkling precision.

Though, for me, Tchaikovsky’s memorable score — played expertly by the Atlanta Ballet Orchestra — could have been louder, the evening was a musical wonder. All five casts had just one rehearsal with the orchestra the previous evening, the stage so crowded that dancers had to work in the wings. Yet on opening night, it sounded as if conductor Gary Sheldon had been working with the dancers for weeks, timing each sustained note and crescendo exactly to the movement.

At the post-show reception, McFall, dressed to the nines in a sports coat, shiny white (silk?) dress pants, and floral print Oxfords, thanked the dancers and called them “the best thing about Atlanta Ballet.” What better way to start his final season with the company. I only hope Atlanta Ballet’s Nutcracker, McFall’s crowning achievement, his gift to Atlanta, will remain a holiday staple for many year’s to come.