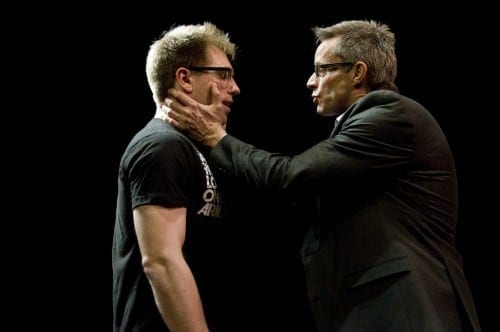 Review: At Actor’s Express, love and faith collide in smart, must-see “Next Fall”

“Next Fall,” at Actor’s Express through February 11, dramatizes a relationship as it comes to a moment of crisis: Adam (Mitchell Anderson) is an atheist with a caustic New Yorker’s wit, while his partner, the younger Luke (Joe Sykes), is a wide-eyed innocent with a fundamentalist Christian background and beliefs. The play was an off-Broadway hit in 2009 and moved to Broadway in 2010, where it was nominated for several Tony and Drama Desk Awards, including best play.

The action opens with Luke in a coma. Adam arrives at the hospital and must deal with Luke’s fundamentalist parents, already there. Under Kate Warner’s smart and lucid direction, the production clips along at the pace of a good thriller, especially during the first act, as we jump back and forth between the hospital waiting room and scenes from the preceding five years of Luke and Adam’s relationship. The device may sound leaden, but, as in a good thriller, we’re full of questions about what’s happening beneath the surface both in the present and the past.

Adam is written, by playwright Geoffrey Nauffts, as a sort of high-strung, neurotic urbanite in the Woody Allen or Neil Simon mold, but Anderson wisely brings out an Everyman quality in the character. His Adam is skilled at self-deprecating quips and cutting zingers, but it’s also clear that he has pushed beyond his self-doubt into a place where it supports a practical, no-nonsense, protective outlook on the world. Sykes brings out the attractive, easygoing simplicity of Luke — he’s perfectly convincing as he prays over a sandwich. Luke is certain he’s on his way to heaven, so nothing frightens him and he doesn’t sweat the small stuff.

It’s a credit to both actors that we’re able to accept such different characters as a couple at all. Luke is a bit of a dippy hunk, while Adam is a middle-aged nebbishy neurotic with a sharp wit. In less capable hands, it would be hard to imagine these two agreeing on a movie to see together, let alone making a relationship work for five years. Anderson and Sykes make the couple natural and believable.

Much of the action takes place within the context of the tense hospital vigil, and the potential for the show to become somber or melodramatic is averted with committed, specific and often very funny performances from the ensemble cast. William S. Murphey as Luke’s father has a parallel (but very different) sense of practicality to Adam’s and is therefore a formidable match for him. The coarse but effective way the character avoids an unwanted coming-out talk from his son is shocking but rings true; in Murphey’s depiction, the father is both horrifying and sympathetic. Patricia French is wonderful as Luke’s mother, especially during a chapel scene in which she speaks frankly about her own bumpy past, her beliefs and her persistent doubts. Jennifer Levison brings a lot of humor and unexpected particularity to the otherwise overly familiar part of the best friend, so much so that it was disappointing when she disappeared for a long time in the second act.

Jennifer Levison brings humor to her role as Holly, the reliable best friend, shown here
with Mitchell Anderson as Adam.

Actor’s Express reliably produces interesting sets for its shows, and Seamus M. Bourne’s design is stylishly spare and versatile. A large open area in front of the hospital waiting room becomes Adam and Luke’s apartment, a restaurant, a chapel, an intensive care unit. The set gives the actors lots of room to do their things, but it also maintains a sense of  intimacy, immediacy and closeness with the audience. It’s a great match of design and play.

Though some of the strongest scenes are in the second act, things tend to drag there. At almost two and a half hours, this is not a short play. Luke is such an innocent that it’s hard to delve too deeply with him, and this shortcoming becomes more and more visible as the play progresses. When Adam confronts Luke with the internal conflicts in his beliefs — if Matthew Shepard’s killers are headed to heaven, he asks, and Shepard is going to hell, is heaven a place where Luke would really want to go? — Luke insists on changing the subject. He obfuscates, and the playwright lets him get away with it. This happens a couple of times with other characters as well. We’re often left with “let’s talk about something else” at the center of the drama. Adam’s forbearance at being kept from his partner’s side in the hospital (family only in the patient’s room) is also hard to understand, especially when we see his strength and sheer doggedness in other scenes. Watching someone put up with such insult and injury for so long doesn’t endear us to him. (Happily, this particular aspect of the otherwise contemporary drama is actually dated now; it need never happen in New York again.)

The play’s primary elements — the hospital setting, the conflicting world views brought into the same orbit at a time of crisis, the clashes over faith, sexuality and family — make comparisons with Tony Kushner’s “Angels in America” inevitable, and “Next Fall” doesn’t benefit from them. Kushner’s work handled the same subject matter and themes in such a huge, encompassing, masterful and definitive way that anything placed alongside it can seem light and thin. “Fall” lacks the edge of “Angels,” and it even seems to ride conceptual ruts that “Angels” sought to break and expose.

Despite these misgivings, I’d place “Next Fall” as the first must-see offering of the new year in Atlanta theater. It’s a serious work that’s not afraid to take on serious subject matter with a lot of humor and intelligence. Audiences may not agree on what they’ve seen, but they’ll certainly leave with plenty to talk about.