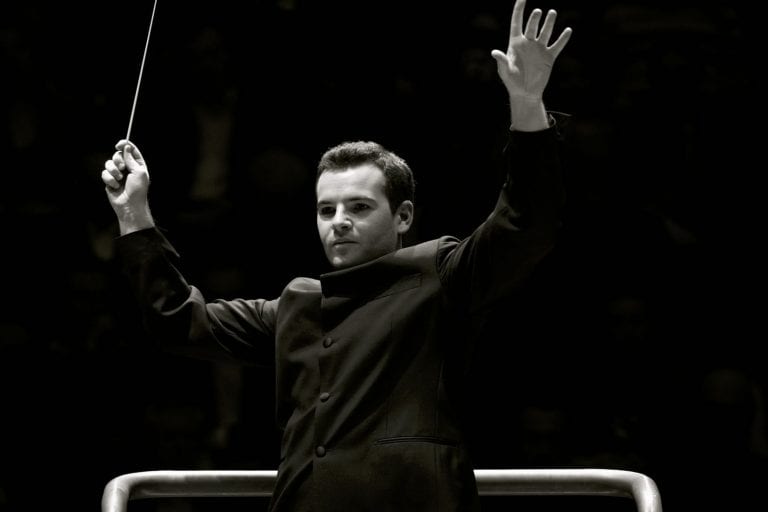 Bringuier made his second appearance with the ASO.

On Thursday evening at Symphony Hall, the Atlanta Symphony Orchestra performed a concert of music by Weber, Mozart and Schumann, led by guest conductor Lionel Bringuier and featuring guest pianist Emanuel Ax. The program will be repeated this Saturday at 7:30 p.m. and Sunday at 2 p.m., both performances at Symphony Hall.

Born in Nice in 1986, Bringuier was the winner of the 49th Besançon Young Conductors Competition in 2005. Starting in 2007, at age 21, he began a six-year term as assistant conductor and subsequently resident conductor of the Los Angeles Philharmonic — the youngest in the orchestra’s history. He was concurrently music director of the Orquesta Sinfónica de Castilla y León (Spain) for three-seasons starting in 2009. His most recent appointment is as chief conductor and music director of the Tonhalle Orchestra Zurich, for which 2014–15 is his inaugural season.

Bringuier made his first appearance with the ASO as guest conductor in April 2013, in a concert with cellist Alisa Weilerstein, leading the orchestra in music by Dukas, Shostakovich and Bartók — a markedly different musical menu from that of this evening.

Thursday’s concert opened with the overture to Carl Maria von Weber’s singspiel, Der Freischütz — an opera with spoken dialogue. Today, the overture is far more often programmed in concert than the singspiel is mounted in theaters outside of the German-speaking world.

Even so, Der Freischütz was an overnight success when it premiered in 1821. Though German-language singspiels and operas of musical importance came before it, such as Mozart’s Die Zauberflöte (1791) and Beethoven’s Fidelio (1805), it was Weber’s Der Freischütz that really opened the future path of German opera, in particular influencing the music dramas of Richard Wagner.

The 10-minute overture quotes music from the singspiel proper, not simply as a potpourri of tunes but rather as foreshadowing of the coming theatrical drama. The music is largely based on a foreboding tenor aria from Act I and cheerful soprano aria from Act II, using them to contrast the elemental forces of darkness and light. Although the conclusion implies that that light and good will triumph, the orchestral sound overall was on the darker, warm and chocolatey side in this performance.

Emanuel Ax, familiarly known as “Manny,” has been a longtime collaborator and friend of the ASO. Born in 1949, he first appeared with the orchestra in May 1976, performing Franz Liszt’s Piano Concerto No. 1 with Michael Palmer conducting. Sunday’s performance will mark a local milestone: Ax’s 60th concert with the ASO.

Ax was soloist for Mozart’s Piano Concerto No. 14 in E-flat major (K.449). Written in 1784, it was the first of six mature piano concertos Mozart would compose that same year. It is neither a long nor a flashy concerto, instead one requiring much thoughtfulness and understatement in its execution.

Ax is one of America’s most esteemed pianists and his performance was first-rate. He returned to the stage afterward to play an encore: Chopin’s Waltz in A minor, Opus 34, No. 2 — the second of the three “Grande valse brillantes” in that opus.

Following these concerts with the ASO, Ax heads off to northern Illinois, within reach of Chicagoland, for a pair of recitals of music by Debussy, Chopin and Rameau, on April 17 and 18 in Wheaton and Rockland.

The second half of the program was Robert Schumann’s Symphony No. 4 in D minor, Op. 120. The original was completed in 1841, but revised 10 years later. The more familiar revision, the one played on this program, uses German tempo markings and all four movements are played without pauses between.

It is notorious for posing issues of orchestral balance, but the 28-year-old Bringuier seemed to handle that well and drew forth a satisfying and surprisingly seasoned performance. Factor into that assessment, of course, the collective experience of the ASO itself, which last ran with Schumann’s Fourth only four years ago, in April 2011, giving it a notable performance at the time under the baton of Norwegian conductor Arild Remmereit.

The overall concert duration was curiously short, 62 minutes by the timings in the program, not counting Manny’s encore, at about five minutes, with a 20-minute intermission. More music, something very short, could have been fit into the evening, but in the end, the program hardly needed it.