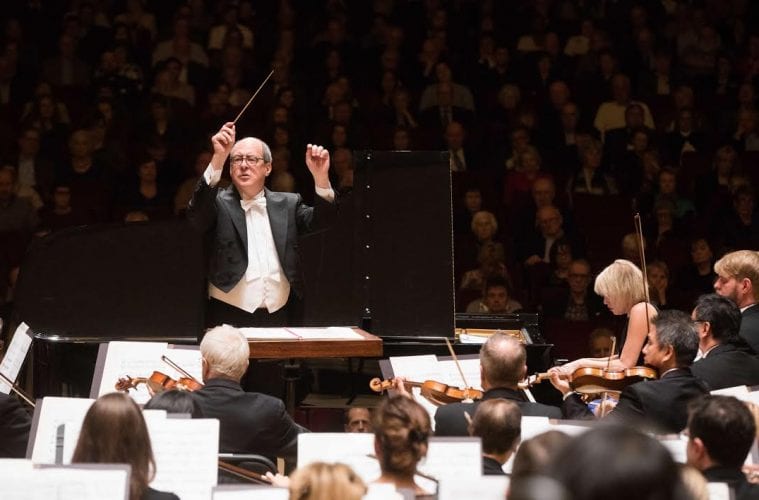 On Thursday at Symphony Hall the Atlanta Symphony Orchestra, led by music director Robert Spano, performed a concert of music by Knussen, Scriabin, Prokofiev and Stravinsky, with pianist Elizabeth Pridgen and ASO concertmaster David Coucheron as featured soloists. The program will be repeated tonight at Kennesaw State University’s Bailey Performance Center, then again on Saturday evening at Symphony Hall.

It was an engaging night of lively, mostly fire-inspired music, almost all of it Russian works from the second decade of the 20th century. The concert also focused worthy attention on some favorite Atlanta-based talent in the realms of performance and orchestration.

Spano and the ASO opened with an outlier, Oliver Knussen’s Flourish with Fireworks, a piece of raucous brevity written in 1988, which made for an exuberant curtain-raiser which, surprisingly, fit in rather comfortably with the century-old music on the rest of the program.

Up next was the most exotic piece of the evening, Prometheus: Poem of Fire, by the innovative and controversial Russian symbolism composer Alexander Scriabin (1872-1915). Although his earlier music was greatly influenced by Frédéric Chopin, Scriabin suddenly turned to a very personal, highly dissonant harmonic style influenced by both his having synesthesia (specifically chromesthesia, where perception of sounds causes involuntary neurological experiences of visual colors) and his deep interest in the mysticism of theosophy. 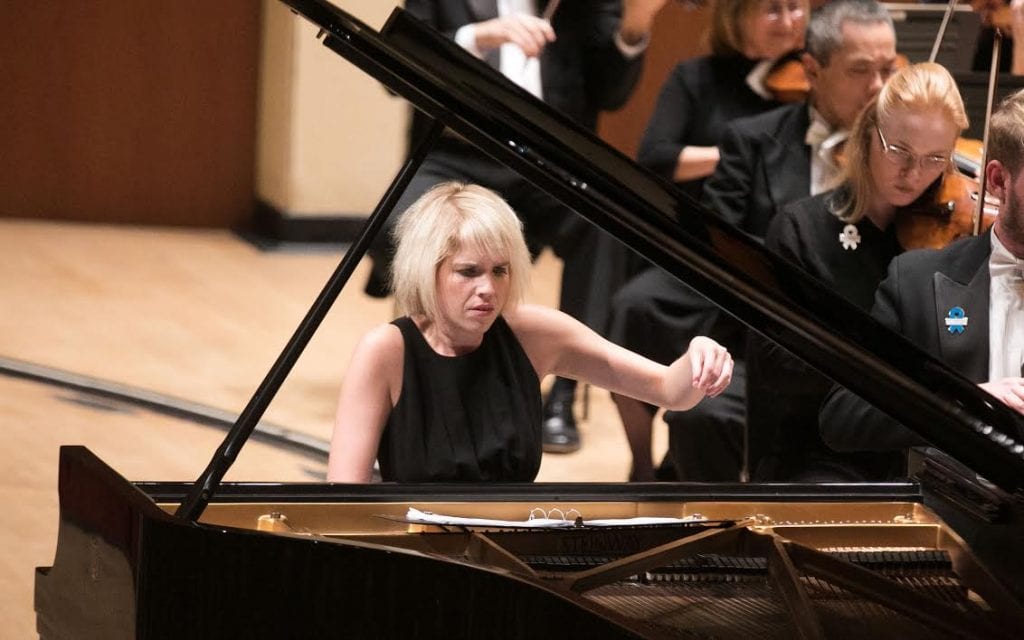 Pridgen brought exuberance to her performance.

By the 1910s, Scriabin’s projects had become more and more grandiose, including his Prometheus: Poem of Fire — scored for a massive orchestra, piano, organ, wordless chorus and a primitive “color organ” designed to project various light designs onto a screen. During the 1911 premiere in Moscow, led by Serge Koussevitsky with Scriabin as pianist, the color organ failed, and the composer never witnessed a performance that included it. One might easily wager that Scriabin would have been duly impressed by the light shows of our contemporary rock bands.

The ASO had performed Prometheus only once before, in 1973, when Robert Shaw amassed the huge forces needed, but also without the color organ. The piece then lay outside of the ASO’s repertoire until Robert Spano asked ASO contrabassist and composer Michael Kurth to re-orchestrate it, so as to fit the ASO’s size and budget, in order to bring it before present-day Atlanta audiences.

It took Kurth three months and four different attempts to reach a final version of the orchestration premiered in this concert, including small tweaks made right up through Thursday morning. Absent the color organ and the chorus (which essentially doubled an organ part), with other parts redeployed among the orchestra, the result is splendid, its reduced forces even clarifying the music of Scriabin’s overwrought original. It will be well worth the programming consideration of other top-tier orchestras.

For her prominent solo part, pianist Elizabeth Pridgen brought a forceful performance that exuded radiance, complex harmonies and vigorous, sweeping gestures often intertwined with those of the orchestra, with the essential piano part emerging from the texture as a bold extension of the orchestration’s breadth and color.

Following intermission, ASO concertmaster David Coucheron took the stage as soloist for Sergei Prokofiev’s Violin Concerto No. 1 (1917). The ASO last performed it in 2010 with Leila Josefowicz as soloist and Roberto Abbado conducting, in the winter prior to Coucheron’s first season as ASO concertmaster. For a modern piece, it is not spiky, being even somewhat Mendelssohnian in character. But its often light and airy modernisms still cannot not be mistaken for Mendelssohn’s 19th-century romanticism.

As such, it is a great vehicle for Coucheron’s playing, a fine amalgamation of sweetness and brilliance, with his keen ear for both lyrical and ethereal aspects as well as the work’s underlying momentum. Prokofiev’s music was a delight which contrasted well with the Scriabin, and set up the audience for what was still to come.

The concert closed with another re-orchestrated piece, Igor Stravinsky’s Suite from The Firebird in its 1919 revision by the composer himself. Stravinsky had himself decided the original 1910 orchestration, as dazzling as it was, was a bit overblown, so he reduced the orchestral forces needed to create a more practical, if no less dazzling, version. Even so, Stravinsky would yet again re-orchestrate the Suite once again in 1945. The 1919 version, especially the “Infernal Dance of King Kastcheï” and the “Finale” proved a welcome, engaging conclusion to the performance.