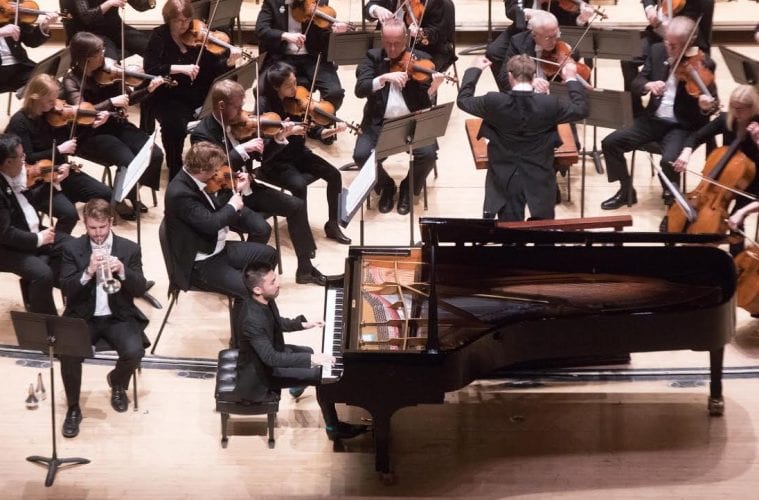 On Thursday evening at Symphony Hall, the Atlanta Symphony Orchestra performed a concert of music by Janáček, Shostakovich and Dvořák, led by guest conductor Christian Arming, with pianist Conrad Tao as featured soloist along with ASO principal trumpet Stuart Stephenson. The program will be repeated Saturday at Symphony Hall.

The concert opened with the three-movement orchestral rhapsody “Taras Bulba” by Czech composer Leoš Janáček. The colorfully programmatic work portrays three episodes from the eponymous historical novella by Nikolai Gogol, representing the Zaporozhian Cossack title character and his two sons: “The Death of Andrei,” “The Death of Ostap” and “The Prophecy and Death of Taras Bulba.” Americans will be most familiar with the characters from the 1962 film of the same name starring Yul Brynner in the title role and Tony Curtis as Andrei, though the story as told in the film’s script differs significantly from Gogol’s two published versions of the book.

Composed between 1915 and 1918, with substantial changes over that period, and premiered at the National Theatre in Brno in 1921, Janáček dedicated “Taras Bulba” to “our army, the armed protector of our nation” in response to the carnage of World War II, after which the Czech nation won its independence with the demise of the Austro-Hungarian Empire. Gogol’s nationalistic, romanticized story draws inspiration most significantly from the 17th-century Khmelnytsky Uprising (1648–1657), a revolt of Zaporozhian Cossacks against the aristocrats of Polish–Lithuanian Commonwealth, which ruled over most of what is current-day Poland, Ukraine, Belarus, the three Baltic states and small portions of Russia and met its own demise 100 years later.

Acknowledging its programmatic portrayal of these things, the music is heavy and episodic in character, even in its conspicuous heroic blasts and its moments of tenderness in the midst of tragedy, in Janáček’s efforts to wrap his musical arms around the meta-musical drama and emotions the music depicts. Arming and the ASO wrestled with these things in performance, with the result that the more full-bodied, extroverted elements of the piece played out better than the rest. Dmitri Shostakovich wrote two piano concertos, and the one heard in Thursday’s concert, his Piano Concerto No. 1 in C minor, is also known as the Concerto in C minor for Piano, Trumpet and String Orchestra. Written in 1933, the piece developed from what Shostakovich intended to be a concerto for trumpet with string orchestra, to a double concerto for trumpet, piano and strings, and finally to what is perhaps better described as a piano concerto with a substantial featured trumpet part.

The remarkable, energetic 23-year-old pianist, violinist and composer Conrad Tao performed the solo piano part, sharing the downstage spotlight with ASO principal trumpet Stuart Stephenson, rather than the prominent trumpet part played from the back of the orchestra, as is sometimes done, though the trumpet and piano do not share equal prominence.

The character of trumpet part, ably played by Stephenson, does provide a counterbalance to the often rambunctious piano part and is given good share of musical spotlight, even if only rising to the role of a fully equal partner late in the final movement, just after the solo piano’s cadenza. For the pianist, the first and fourth movements pose more difficulties than the two inner movements, mostly in the form of awkward runs and quick leaps, but that final cadenza in the last movement is especially challenging. Tao’s assertive handling of the whole was brilliantly virtuosic.

Tao returned to the stage, sans jacket in favor of his black t-shirt, to play what was perhaps the most adventurous encore to be heard on the ASO stage in a long, long time: Elliott Carter’s “Caténaires” — the title being the French word for the mathematical and architectural term “catenary,” derived from the Latin word for “chain.” The word stands for an idealized curve that a hanging chain or cable assumes under its own weight when supported only at its ends.

Written when Carter was 97, “Caténaires” is marked “Jaillissant” (French for “springing up”) as its tempo. It is essentially a single-voice stream of 16th notes, eschewing the keyboard’s distinctive capacity for polyphony, but like works written for instruments limited to playing single notes at a time, often implying multiple voices. Tao played the velocious work with enthusiasm and nonrigorous abandon. It was by far the ear-opener of the evening.

Antonín Dvořák’s Symphony No. 7 was the concluding work, a high-romantic work that, while as nationalistic in spirit as Janáček’s, was of much sunnier disposition, even in its own sonic colors and deep-hued character, without the attendant themes of war and bloodshed. Greatly inspired by Dvořák’s admiration of Brahms’ Symphony No. 3, it nevertheless reflects Dvořák’s concern with the political struggles of the Czech people under that same Austro-Hungarian Empire, and it was determined this particular Symphony would reflect that. Arming and the ASO gave it a well-honed, energized performance.