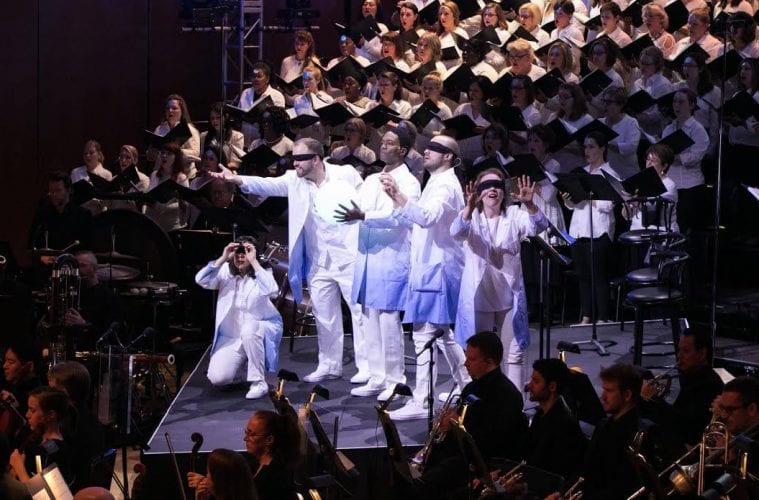 On Thursday evening at Symphony Hall, the Atlanta Symphony Orchestra and Chorus performed “Creation/Creator” by Christopher Theofanidis, one of the original members of the ASO’s Atlanta School of Composers. Led by ASO music director Robert Spano, the concert was a reprise of the ASO’s highly successful premiere of the oratorio in 2015.

The program will be repeated on Saturday night at Symphony Hall in advance of the ASO taking the production on tour to the Kennedy Center in Washington, D.C., where it will be performed on March 31 as the focal presentation of the SHIFT Festival, a new festival of American orchestras co-presented by the Kennedy Center and Washington Performing Arts.

“Creation/Creator” is a landmark work for Theofanidis, who has made only a few changes to the score since it was premiered and recorded two years ago. Although Franz Joseph Haydn’s oratorio “Creation” is a classical precedent in theme and scope, Theofanidis brings a broader tapestry of cultural creation stories to the work; even more importantly, he brings human creativity to the fore, rather than only as a subtext. That he draws these texts from ancient, classic and modern sources found in religion, science, philosophy and literature gives the work considerable contemporary interest. As a result, the greater theme is one of creative impulse, both on a human and a cosmological scale, and how sharing of knowledge spreads the seeds of creativity.

Given that some meaningful prose texts are more easily spoken than sung, Theofanidis is wise in how he has deployed them throughout: sometimes melodically set, sometimes sung in a declamatory manner, and a few movements that present texts in plain narration.

The vocal quintet, a splendid ensemble, was a kind of reprise itself. All but mezzo-soprano Cooke were involved in the premiere performance and the recording. The five soloists, in all-white attire, sang from a raked diamond-shaped platform in front of the chorus, in the middle of the orchestra. Except for Ford, who held a luminous blue globe, they sang the opening movement, “Elephant in the Dark,” blindfolded.

However, it was the second movement, “God Tapestry,” which really kicked the oratorio into gear, with exciting music, texts from the Rig Vedas and the 15th-century Indian mystic poet Kabir, and the most complementary and convincing of Arsham’s video sequences of the evening. The combined energy had a staying power that set up and permeated the rest of the evening’s performance. 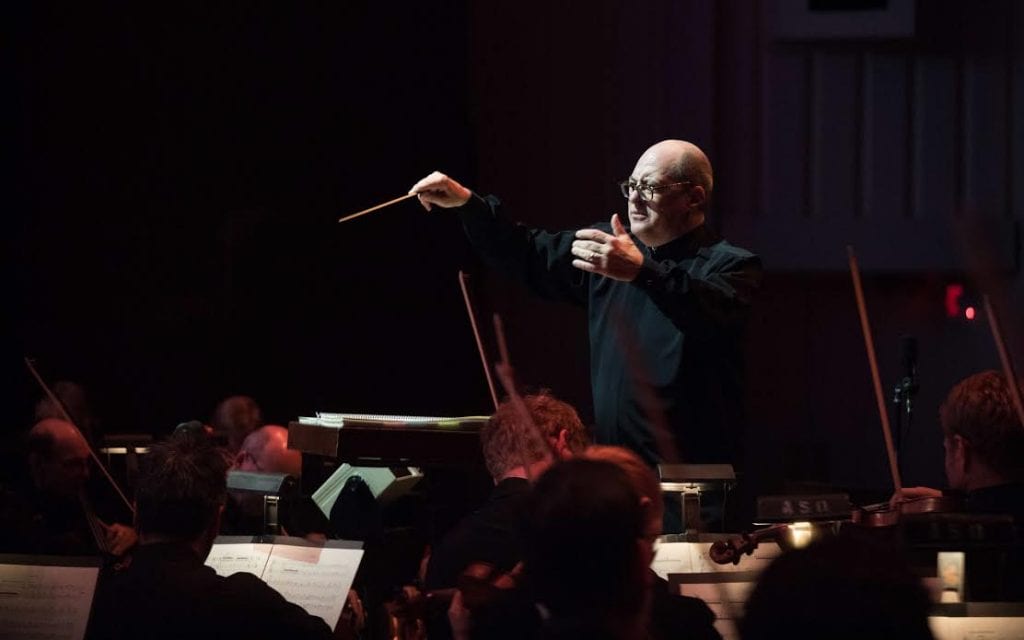 The work by Theofanidis will serve as a showcase for the ASO at their Kennedy Center performance next week.

The ASO Chorus was at the top of their game. Like the soloists, the chorus wore white clothing. They also wore round, reflective silver stickers on their foreheads, as if each chorister was sporting a third eye with which to view their scores. That was easier to see in the premiere, but not so noticeable this performance.

In contrast, Spano and the orchestra were dressed in black, but not formal wear. The actors were attired in a manner appropriate to their roles: Eubanks, as the 17th-century English aristocrat, philosopher and writer Margaret Cavandish, dressed in a dark period costume; Cole in a simple suit, reading words of James Weldon Johnson, finally ascending the podium as if a pulpit, preaching to the assembled with emphatic evangelism.

Theofanidis’ music is very attractively melodic and dramatic, not only in serving the continuity of oratorio’s eclectic assemblage of literary sources, but also in its own right — including a couple of notable movements that are purely orchestral.

To quote my own review of the premiere: “Creation/Creator” is the kind of work that brings out Spano’s best strengths as conductor and as artistic director, and that of the ASO and Chorus overall as well. It is exactly the kind of project that the ASO should be pursuing and presenting more, not less. That assessment still stands true for Thursday’s performance and surely will for Saturday as well.

It also bodes well for the SHIFT Festival at the end of the month, when the ASO has again an opportunity to showcase to a more national audience what we are doing as a creative community in a major city — not simply preserving great art, but creating great art.