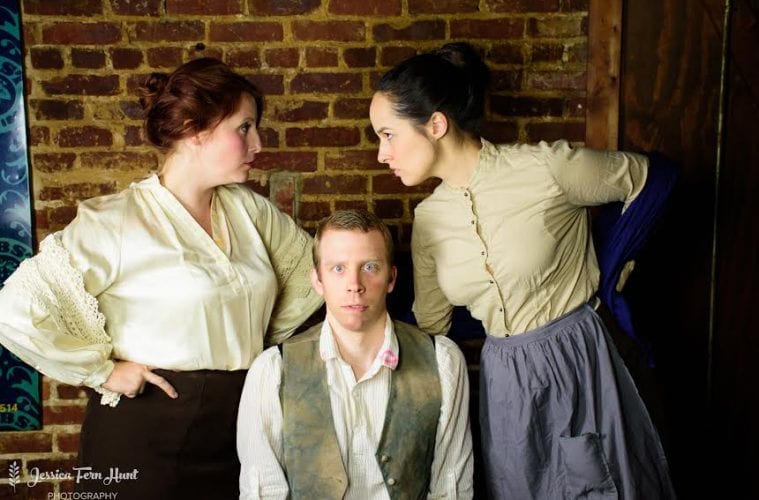 Review: Aris hits the mark in a big way with Irish classic “The Playboy of the Western World” 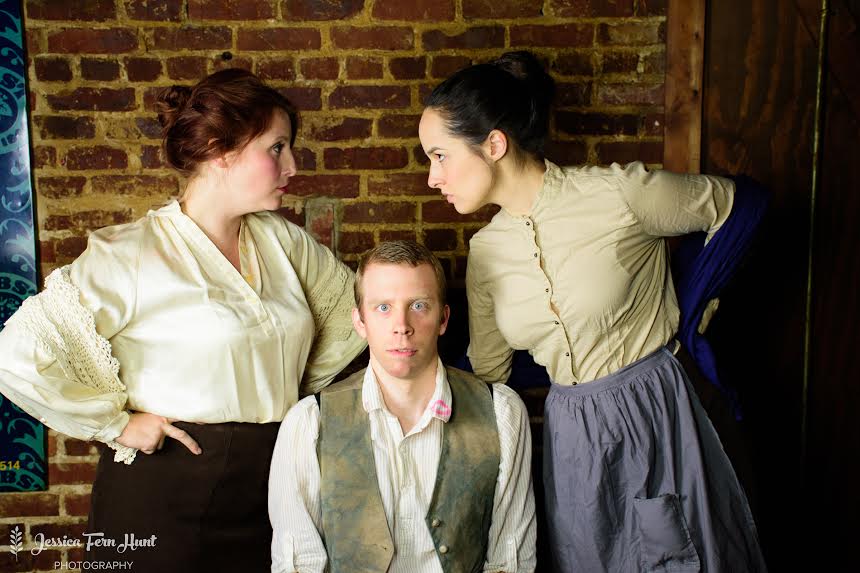 Atlanta theater company Aris has mounted a solid, likable production of a monumental classic, J.M. Synge’s The Playboy of the Western World, running through October 11 at Georgia Public Broadcasting’s Studio B in Midtown. The route from the parking deck to the theater space (a hallway, an elevator, another hallway, another elevator, another hallway) may be so complicated it brings to mind the opening credits of Get Smart, but the insightful and charming production makes the journey worthwhile.

Founded in 2013, Aris is a new company that produces Celtic works of theater and dance in Atlanta, filling a void left by the former Theatre Gael which had a similar mission for more than 20 years before ceasing regular productions in 2008. Those who remember Theatre Gael fondly will be pleased with the well-crafted production of the 1907 classic by the young company.

Playboy of the Western World is set in a small rural pub in County Mayo during the early 1900s. Christy Mahon (Chris Rushing), a young man running away from his farm, arrives in town claiming he’s killed his father.

The shock of his deed quickly transforms into celebrity as he captures the imagination and attention of the locals, the girls and women in particular, but most of all that of the usually no-nonsense barmaid Pegeen Mike (Sophie Edwards). The plot thickens when Christy Mahon’s very much alive father arrives to track down the runaway.

On the surface, Playboy may seem to be a light comedy about the charming goings-on in small-town Ireland, and that’s certainly in there, but Synge’s play actually caused riots at its Dublin premiere. There’s plainspokenness and brutality, sometimes even crassness and sadistic cruelty (it’s about parricide after all).

In its own singular way, it’s a pretty dark and bleak depiction of Irish rural life, which was, and still is, often sentimentalized and mythologized. (Irish nationalists instigated the riots, viewing the contents of the play as an offense to public morals and an insult against Ireland).

What’s great about the Aris production is that it captures both aspects: It’s a funny and charming comedy that doesn’t shy away from some of the harsh aspects of the story.

At the center of it all is the strong performance of Edwards as Pegeen Mike. Edwards has a directness and toughness that are perfect for the part, but she also lets the character’s vulnerability and sensitivity come through in the play’s quiet moments.

Chris Rushing makes a fine Christy Mahon, depicting the character’s tall-tale-spinning charm and also his boyish hucksterism. The supporting cast is likewise strong (Irish accents are distributed unevenly, however, though in the end, this a minor distraction). Especially fun here are Hannah Church, Emily Kleypas and Julia Weeks in comic supporting roles as a trio of sighing and fawning starstruck young local women.

It may not be the easiest venue to find, but don’t let that put you off. Aris spins a fine tale that allows for all the aspects of the work to shine through. Allow a little extra time to get there and enjoy Aris’ production of an undeniable classic.