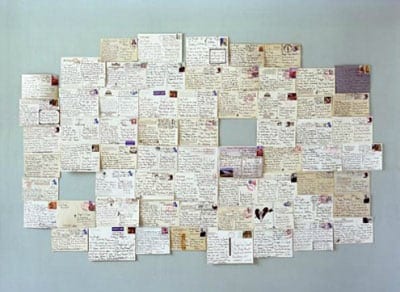 At least since the crusades of Alfred Stieglitz a century ago, art photography has been burdened by problems of intentionality:  the ability of a photographer to convince us that her or his images are suffused with expressive self-consciousness.  If, the thinking goes, we can accept photographs as deliberated illusions created by deliberate gestures, the way is clear to valorize pictures for what they adduce about an artist’s purported uniqueness, originality or even (to cite the highest bourgeois honor) genius. In a departure from her earlier work, West’s spare pictures show us discrete items hanging from white walls: dead fowl, postcards, unspooled cassette tape, folded notes, ephemera. The effect is what might be called a false trompe l’oeil.  Optical sharpness, flat lighting, neutral color and physical scale — the objects shown are their actual size or larger — combine to make it seem momentarily that the pictured wall on which the objects are hung has transubstantiated into the actual wall of the gallery, so that we are surrounded not by images but by their contents.

The effect breaks down before long, as discrepancies among the pictures’ illusionism emerge. The color of the pictured wall varies from image to image and, in one case, is not white but a pale teal.  In one picture the white surface turns out to be a table top (i.e., space is introduced), and in others the frame is used to truncate objects.

More than this, what breaks the spell of objects-made-manifest is the act of photographing itself, which distances us psychically from the objects, as if to withhold us from contact with them, or place our contact in abeyance.  After all, West could have put the objects themselves on the wall and forsaken photography (which might have resulted in a stronger show), but instead she has put a glass eye between us and her inventory and extruded their presence through it.  This act of using photography to push away what we see — or more strictly, to hold up and push away at the same time — is the key to West’s thinking in this collection of work.

The objects she chooses to show us are mostly one form of carcass or another. There are the literal carcasses of birds, felled but not yet fallen, hanging upside down on lengths of twine with their wings spread open from gravity. Part trophies and part murder victims, their dangling bodies proclaim either the beginning or the end of cruelty. There is also the carcass of music, in the form of ribbons of old cassette tapes unwound from their plastic casings and strewn into knots and tatters, recuperated on the wall as drawings in which limp line is almost lively. The centerpiece of the exhibition is an assemblage of old postcards sent to West by someone named Tanner, seemingly a lover.  We might or might not take the time to read the writing on the wall — as if to animate him vicariously — but West is diffident about whether it’s worth the effort, inasmuch as she has trained a fan on them, leaving some to flutter in advance of taking flight.

Is the melancholy of the collection an analogue of the life of the artist?  It’s hard to know, but the real answer to this question is another question:  should we require of West that her pictures be autobiographical, much less confessional, just because they are personal? I would say no.

The problem is that West both wants us to figure out whether human warmth can come from cold depiction, and wants the images’ clinical formality to keep them from confirming that we are standing before confirmed signs of inner truths.  She offers no way out of this predicament.  If these pictures are tokens (or harbingers, or relics) of an interiority worth knowing, we are simply left to ask:  where do these objects come from, and where do they belong? My guess is that the objects we see issue from the artist’s studio in its mythic sense, the set-aside place where the photographer goes looking for revelations, where she might forge clues to the person she once was into indices of the person she is becoming. The studio as a stand-in for the creative self is a worn metaphor, as familiar as the sprawling house that symbolizes the inner life of the protagonists in 19th-century novels.  Its danger in artistic practice is the solipsism that it can induce, as if to confer wonder on every random wall stain and rarity on personal memorabilia.

The sadness and inertness of the things in West’s studio disclose the artist as an isolated figure, but I’m not convinced that they disclose much more than that. They don’t tell us about her inspiration or the sources of her solace, which results in the uncomfortable situation of would-be precious objects lacking aura or performativity.

Mostly these pictures raise the question of whether West is the sort of photographer who is more likely to find the inwardness she seems to want when she has the open world to respond to.  “Your spirit has power only when it is given direction,” writes Elias Canetti in his Hampstead notebooks.  “Left to its own devices, it would sing itself into despair.”  Canetti doesn’t name the person to whom he is speaking, but I think it might be Angela West.

Roger Ballen’s latest body of work, “Boarding House,” is his own foray into studio photography, in a manner of speaking. Ballen’s reputation has rested on his documentary photographs of poor, rural South Africans living in squalid isolation. Typically working in confined interior spaces and favoring a heavy use of flash, he photographs as if his subjects were strange creatures of darkness — the human equivalent of deep-sea organisms — to which he brings a relentless, momentary light. To the extent that this work has succeeded in being provocative and not merely sensational, its celebratory qualities are the source of its strength. Ballen takes a decidedly amoral stance as a documentarian: his subject isn’t really rural poverty, but the lure of the outré, the psychosocial implications of a world in which depravity seems to be detached from sin. Visually the result has been something like Michelangelo Pistoletto meets Henry Darger meets Weegee.

Ballen’s new pictures drop the pretense of documentary and show him working inventively with the spaces and objects of a residential home for the poor and the outcast.  The spaces of the pictures are still flat — we are situated always just a few feet from walls or corners, curtains or partitions — and again the artificial illumination is insistently harsh. The human figure has largely disappeared, and in its place are elaborate eldritch assemblages incorporating all manner of scribblings, childlike drawings, idiosyncratic hieroglyphics, bent wires, broken dolls, live animals, soiled fabrics and unnamable corrugated substances.

Pictorially these constructions are treated less like tableaux than proscenia, like sets for a theater of the occult. Indeed, the frequent use of particular motifs — hollow-eyed heads, desiccated flora, abscised hands, arms and fingers — lends the images a distinctly ritual quality, as if we were looking at altarpieces for a private sacramental rite devised for purgation and scrying, and quite far from promises of salvation. Or to put the point differently, the assemblages attest to the ways that repetitive symbolic arrangements can produce potent analogues of sanity, odd forms of order whose fascination is that they assume abnormality as a primary human condition. Contrivance is the risk of this work. Many of the pictures exert a lot of effort to achieve a little levity, and sometimes Ballen seems to be compulsively rearranging his props, succumbing to the anxiety of trying to outwit the artiness of his inventions. It’s as if he badly wants us to see the strange sanctity of psychological and cultural regression (as duly graced with urgency and ugliness), but he’ll be satisfied with a baroque congestion of childlike expressionism, and if he can’t have that, then tabloid surrealism will do.

What redeems the work is Ballen’s suspicion — and he is right — that there is a special kind of exigency in turning human fiasco into questions about human essence. Looking into his pictures, whose sensuousness seems like a remarkable coincidence of seizures, we wonder:  if in a vision of truth we beheld the whole of life’s corrupted innocence burning itself out in a riveting spectacle, leaving behind only pure innocence or no innocence at all — would we be happy then?