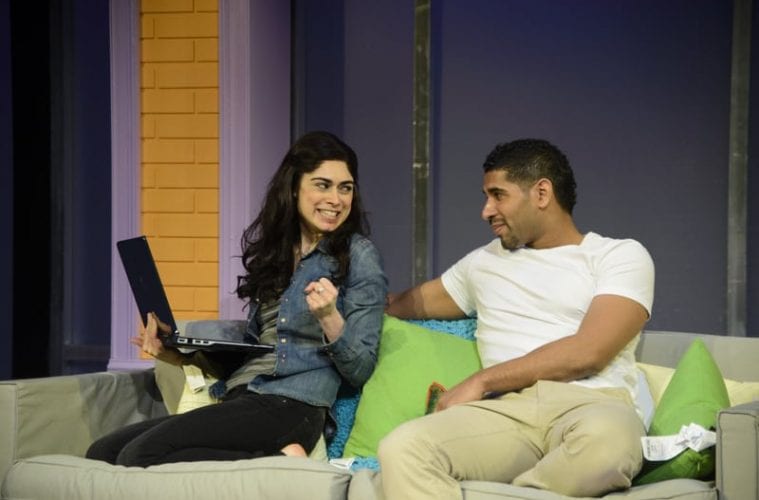 Review: All’s fair “In Love and Warcraft,” as it peers into the solitary lives of online gamers 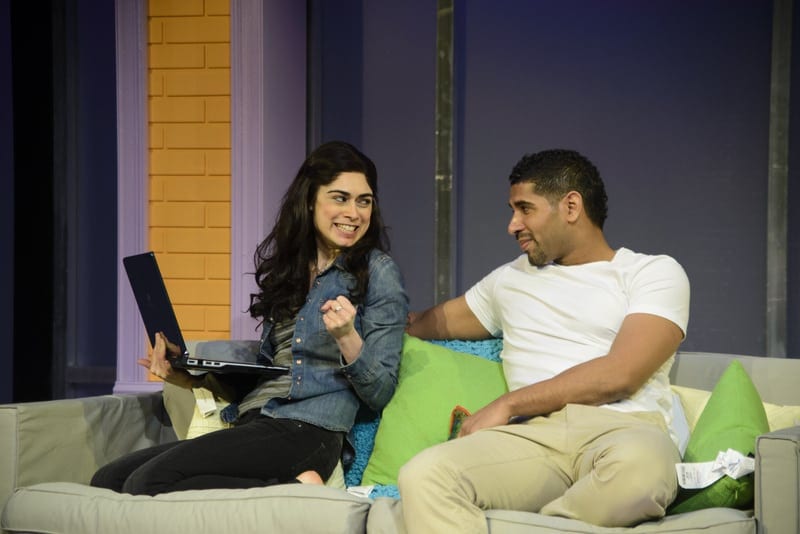 Lily Balsen and Evan Cleaver in the Alliance’s In Love and Warcraft. (Photos by Greg Mooney)

In Madhuri Shekar’s play In Love and Warcraft, at the Alliance Theatre through February 23, Evie (Lily Balsen) likes to think she has mastered both the art of relationships and the art of war. But her knowledge of relationships extends only to other people (she earns extra cash writing love letters for fellow college students seeking to mend broken relationships, though she’s never had a boyfriend herself), and her knowledge of war is entirely relegated to the online world, where her badass avatar Princess Azareth rules a game called Warcraft Universe. Into her isolated, nerdy kingdom comes the good-looking, patient Raul (Evan Cleaver), who is interested enough in the real Evie to try to break through her ample defenses.

The first act of Shekar’s fun and energetic play, which won the Alliance’s annual Kendeda National Graduate Playwriting Fellowship, is jaunty and fleet, the way a romantic comedy should be. There are several little story lines that keep things lively: Evie’s game playing and her resistance to any relationship IRL (that’s “in real life”); the manipulated break-up of her roommate Kitty (a delightfully brazen Alexandra Ficken), which has unpredictably real consequences; Evie’s side business as a love doctor; and her budding relationship with Raul are all wonderfully braided together.

But things get sludgier in Act II when Evie and Raul’s relationship starts to get serious (he pledges not to pressure her into sex if she pledges not to play Warcraft Universe). At a little over two hours, the play runs a little long for its type of comedy. There are lots of little interludes and monologues by peripheral characters commenting on various aspects of sex, love and relationships, and though they’re genuinely funny (and created well by supporting players Diany Rodriguez and Bobby Labartino), they don’t really add enough to the story to justify their presence. 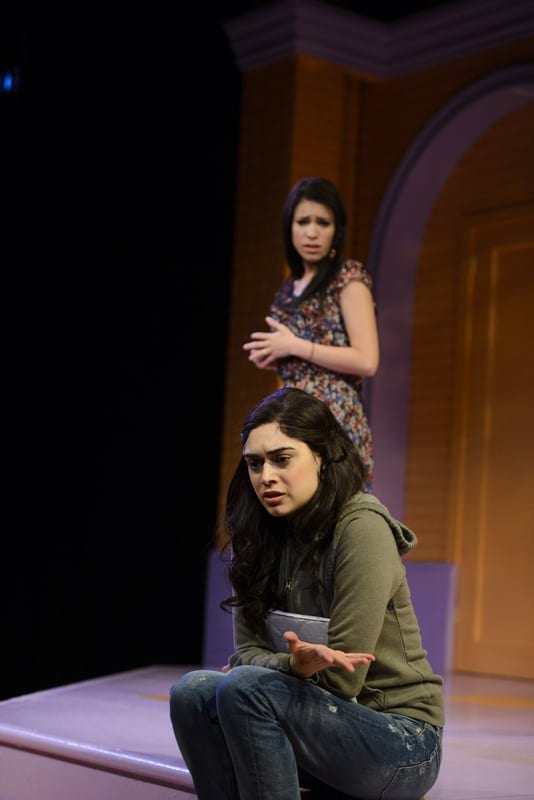 Much of the script relies too heavily on the tried-and-true tropes of romantic comedy, all of which seem overly familiar by the end: there’s the cynical female protagonist who’s resistant to falling in love, there’s the brassy best friend, the perfect, devoted male love-interest who is determined to break through his partner’s defenses. There’s even a sassy and flouncy gay hairdresser who helps Evie get ready for her big date. (The audience laughed, but I still hold out hope that people will get tired of that one some day. They will have to, won’t they? Surely, it can only amuse for a limited number of times, for a limited number of years.)

We enter the video game world late in the play, which is a bold and inventive move on the playwright’s part, though in the end, there doesn’t seem to be much of interest or consequence there. The game’s monster keeps coming back what seems like a dozen times. “This place is so huge,” remarks new player Kitty about the online gaming universe. We’re told that, but we don’t see it, and it might have been nice to see it or feel it more, with video game scenes threaded throughout or more insight into what makes it so compelling and addictive for Evie.

But it’s a cute little comedy that should delight its target audience of college students and gamers eager for a chance to laugh a bit at their own foibles. The play is not for little kids, by the way, even if the title might suggest otherwise to some potential ticket-buyers. By rom-com standards, things get pretty raunchy. (Think Judd Apatow and the Farrelly Brothers more than Drew Barrymore and Sandra Bullock.) A few older patrons seemed uncomfortable, and it’s decidedly not for the wee ones. But I do think there is an audience sweet spot somewhere between grandkids and grandma that will fall in love with Warcraft.