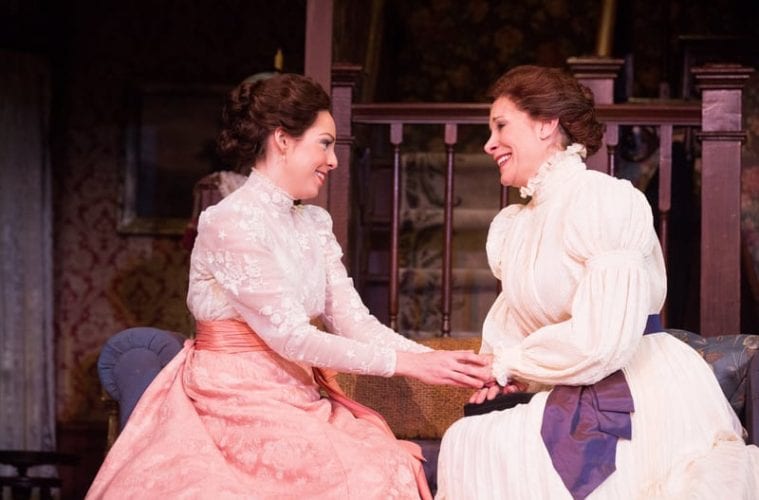 Review: The Geller Girls at Alliance Theatre takes an enchanting bike ride back to Atlanta’s past Atlanta playwright Janece Shaffer sets her latest play, The Geller Girls, currently having its world premiere at the Alliance Theatre through February 9, in her hometown during a seldom depicted, but nonetheless pivotal, time for the city: the 1895 Cotton States and International Exposition. Following a mania in the 19th century for world’s fairs, industrial expositions and the like, Atlanta, never wanting to be outdone or left out, held its own on the site of what is now Piedmont Park.

Shaffer focuses not so much on the exposition itself (there are just two short scenes set at the fairgrounds) but on the effect it has on an Atlanta family, especially the two sisters Louisa (Ann Marie Gideon) and Rosalee (Courtney Patterson). The Geller girls don’t exactly face enormous hardships in their lives — they live a reasonably comfortable middle-class existence with their father, Albert (Mark Cabus), and his fussy, doting second wife Sarahann (Courtenay Collins) — but they have been raised in a very small world with limited expectations for what their possibilities are.

The independent older sister Rosalee’s largest ambition is to run her own dress shop in Atlanta, and the pretty younger Louisa has been engaged to the boy next door almost from the time she could walk. Their clearly planned paths are called into question, especially for Louisa, when the wider world comes to Atlanta and they begin to encounter the vast international spectacle of the fair itself, legions of foreign visitors, suffragettes and independent women (riding bicycles, no less).

It’s a transformative experience, one that makes it difficult for Louisa to adjust back to the ordinary prescribed life of propriety, marriage and motherhood that’s been mapped out for her. Further complicating matters is the Gellers’ handsome, charming and sophisticated young cousin Charles (Joe Sykes), visiting from New York, who is perfectly plain-spoken about the real possibilities that might be available for the sisters in a rapidly modernizing and changing world.

Shaffer aims to please and succeeds. It’s a charming story with likeable characters, and the Alliance has given it a lovely and elaborate production with a fine cast. The exposition itself is abstractly depicted as a backdrop of electric lights outlining pavilions and Ferris wheels, but the other main locations — the Gellers’ two-story Victorian home and downtown shop — are given huge, delightfully detailed sets by designer Collette Pollard.

Still, the focus remains wisely on the characters themselves. Patterson gives the elder sister Rosalee an exhausted, spinsterish world-weariness that quickly changes into a defiant drive for independence. The scene in which the usually unobtrusive Rosalee is determined to give bike-riding a try in spite of the scandal it might provoke is easily the play’s best. Gideon likewise creates a lovely portrait of wide-eyed innocence and enthusiasm becoming tempered by the perspectives of experience and understanding.

During the show, I thought of Chekov, whose very different plays were also set in this time period, who also wrote about middle-class families in provincial places and sisters longing for broader horizons. It seems unlikely anyone in Chekov would ever sit down to have some banana pudding, and if they did, they would never eat it with the sense of communicative enjoyment the characters display in Shaffer’s work.

The Geller Girls is an enchanting play tailor-made for Atlanta, and I imagine theatergoers will be thoroughly captivated by its all but irresistible charms.

Click here to see more photos from the production.