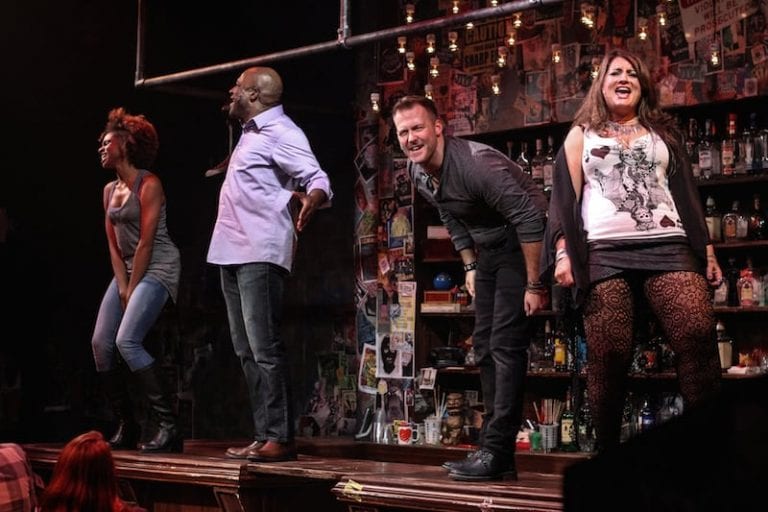 Review: Actor’s Express gets its groove on with unforgettable music behind “Murder Ballad”

It’s a simple premise, really — a young woman in a seedy bar narrates via song a tale about a love triangle that goes horribly astray. Yet there is nothing simple at all about the rock musical Murder Ballad or Actor’s Express’ version of it, running through December 7. It’s an exuberant, intoxicating piece of theater.

Jessica De Maria is the show’s narrator, filling us in on the legs of the romantic triangle, one of whom doesn’t make it out alive. (“Listen and I’ll tell a tale / a tale where good does not prevail / a king, a queen, a club, a knave / one is destined for the grave,” she sings in her first number, the titular “Murder Ballad”).

Sara (Kristen Alyson Browne), a young artist in New York, makes the acquaintance of bartender Tom (Jeremy Harrison) and the two start an affair. Much later, when their relationship is done, Sara meets Michael (Kevin Harry), an older man who has much more stability. The two marry, begin a family and settle into domestic bliss. When Sara and Tom run into each other again down the line, however, the physical attraction returns.

In New York Murder Ballad was an off-Broadway sensation back in 2012 and is just now starting to make the regional theater rounds. (Ironically, two artists with recent Atlanta ties — Will Swenson of the Alliance Theatre’s world premiere Bull Durham and Trip Cullman, director of the Alliance’s 2013 version of Choir Boy — were part of the original production, with Swenson starring as Tom and Cullman directing.)

Julia Jordan — a Jonathan Larson Award winner — has come up with the book and lyrics, and singer Juliana Nash the lyrics and music. The musical is told sans dialogue — in Murder Ballad the score drives the narrative. Fortunately, the storytelling is unhurried and efficient and the score proves to be varied and smart. In “Coffee’s On,” for example — as Sara begins to rethink who she has become — she wonders “How did I become so useless, in this time and place? / I want to stay under these covers, and not show my face.”

Director Freddie Ashley’s four-member cast is very attuned to the material, both emotionally and vocally. Murder Ballad features solos, duos and numbers where all the players sing together, and almost all are wonderfully staged, very ably backed up by a four-piece band (Bill Newberry, Bennett Walton, Brandon Hembree and Dennis Durrett-Smith).

The characters aren’t tremendously deep, but the cast give their roles needed dimensions. Browne and Harrison generate palpable attraction; their lust is believable and quite sexy. Apart from each other, there is appropriate longing between the two, especially from Harrison. For his part, Harry gives Michael a sense of contentment tinged later with confusion, not really knowing the woman he has married. All three actors are impressive, but De Maria is especially memorable. The narrator role could be a less showy one but in her hands the part becomes anything but.

Ashley and his creative team — including scenic and costume designers Isabel and Moriah Curley-Clay — have turned their stage into a smoky dive, with a pool table in the middle and a bar behind it, chairs scattered throughout where audience members can sit near the performers. Thanks to Becca Potter’s choreography, the four actors weave in and out of the action in some highly stylized numbers.

Actor’s Express has been on something of a hot streak the last few seasons, choosing work that nicely fits their vision and strengths. It’s hard to think of another local theater company that could pull off this musical as well.

It’s a fast-paced show — running less than an hour and a half — and it’s surprising how much emotion the final passages have. Murder Ballad is sleek, but be warned — don’t be surprised to find yourself on YouTube listening (and relistening) to the addictive score afterward.