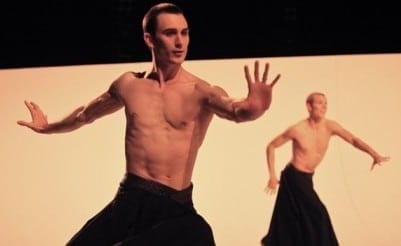 Shaping a contemporary, kinetic, edgy new profile means stepping out on limb, taking risks, stretching, discovering new patterns of thought and motion, pushing the body and mind to its limits. Such was Atlanta Ballet’s spring mixed repertory performance, “Fusion,” which felt like a breakthrough for the company.

Works by Helen Pickett, Christopher Hampson and Val Caniparoli were exhilarating: breathlessly beautiful, politically edgy and harmoniously multicultural. It’s a different tack, a dynamic shift in the company’s course, and one that should be experienced in all of its expressive range. The show runs through March 27.

Even before the show, the Cobb Energy Performing Arts Centre’s crowded foyer resonated with live African drumming as students from the Atlanta Ballet Centre for Dance Education welcomed theater-goers with an African dance. A sense of community and a celebratory feeling were immediate, and a surprise. 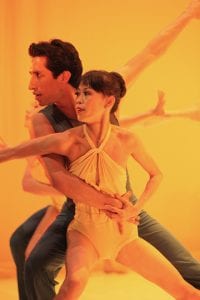 The audience was further taken in by Pickett’s “Petal,” a lushly hued, musically driving, sensually inventive and tactilely expressive look at human relationships. Vivid yellows, pinks and purple saturated the stage space as dancers deftly slipped in and out of freshly imagined configurations. Music by Philip Glass and Thomas Newman felt effervescent, impetuous, growing in urgency like a mountain stream that begins with a gentle lilt and gathers force until it’s an unstoppable, powerful surge. With speed and logic, duets folded into each other and opened out into swift sweeps of the legs, extreme leg extensions. Energized dancers propelled through space with light, quick hitch kicks, breathless suspended turns and whirling leaps, all done with a glowing physicality that spontaneously brought the audience to its feet, startled by its extreme beauty, sensuality and effervescence.

And, thankfully, Atlanta Ballet risked Christopher Hampson’s re-imagining of Stravinsky’s “The Rite of Spring.” It was a stark contrast to “Petal” and pointed out that of all the art forms, ballet is too often restricted to happy endings when it’s capable of expressing much more. In a vigorous look at the nature of human brutality, Hampson also drives home a political point on the subject of torture.

It’s an enormous challenge for only three performers — Tara Lee, Christian Clark and Jacob Bush — to match Stravinsky’s huge orchestration. But mostly they hold their own as riveting, charismatic dancers. Hampson knows the music well — how its moods change abruptly and unpredictably. He brings out these details as his story unfolds to the music’s primal undercurrents, dramatic, rhythmic shifts and impulsive twists and turns. Designer Robert Hand’s huge white containing wall curves upward like a basin, trapping the two brothers. Initially the set suggested a vast, barren landscape, but later it resembled a prison cell. 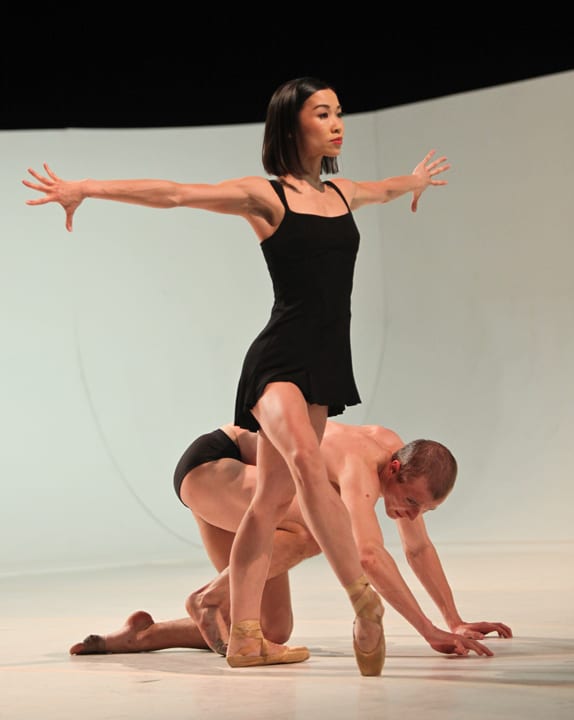 There’s an early duet between Clark and Bush, who seemed trapped, lunging and thrusting the palms forward and recoiling into dervish-like whirling, arms thrown upward with a sense of futility. A blind prayer becomes a desperate plea as each throws his upper body forward and then thrusts the chest upward, swinging the arms back.

Lee gives a riveting performance as Faith, and later as Death. She hovers over a tortured Bush like a merciful angel but then changes into a fickle seductress. Clark, as the Soldier, is brutally aggressive, though his motivations beg for a deeper explanation. Bush undergoes the greatest suffering and has the biggest task, to carry the music’s magnitude through his ordeal. Perhaps a more intimate pas de deux with Death would fill the sparse moments. Surely, for Bush, it’s a life-changing role.

And if cultural misunderstandings create such strife, then Caniparoli’s “Lambarena” shows the audience how to make peace, by merging music and dance of Africa and Europe. In this work, the body becomes the medium for reconciliation between African dance, where the weight is grounded, and classical ballet, where the muscles pull the body weight upward through the legs. The dancers must transition seamlessly from one approach to the other, integrating the two. The result is life-affirming.

In some African cultures, dance is part of everyday life — it’s working, praying and celebrating. In “Sankanda,” five women in silk-satin dresses of gold, green, indigo and burnt orange are led by Kristine Necessary.

Joyously, the women move together in step, hips moving in gentle circles while they gesture as if gathering and putting things into a basket, offering them outward. Arms trace soft curves around the body. The women burst out across the space with generous, full-bodied movement in masterfully constructed patterns and groupings. At one point, a courtly sequence of lifts rise and fall like contrapuntal voices, at first to Bach’s music; later the sound is simply a quiet, otherworldly sound of night creatures, as if calling out to one another in a forest. There’s depth and texture in John Welker’s solo to “Agnus Dei,” set against a deep teal background, backed by an ensemble of men. Like a Baroque sculpture, Welker twists the torso, as if coiling toward heaven.

In “Herr, Unser Herrsher” — to Bach’s wavering, ascending melody — Clark leads an ensemble that steps forward and back as the torso ripples from side to side like heat waves rising up from a hot, parched earth. In a circular motion, they point up toward the sky, then down toward the earth, suggesting life’s cycles, and that in the space between heaven and earth, we sense, feel, toil, suffer, share, pray and celebrate. “Fusion” is all of those things.