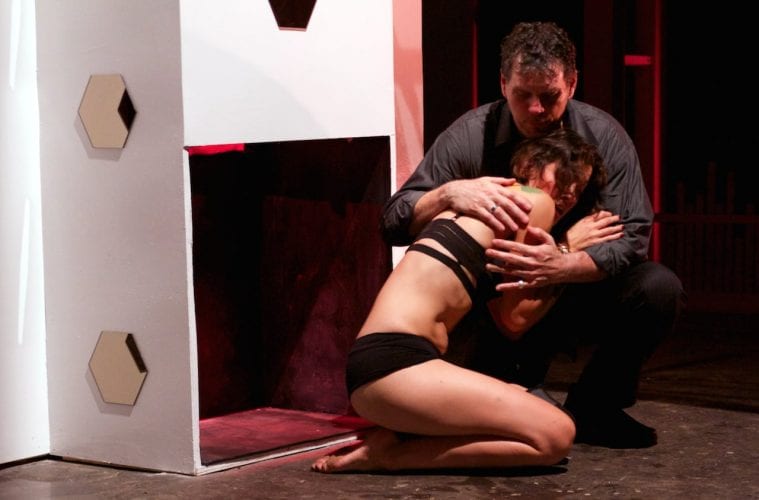 Review: 7 Stages journeys to the Goat Farm for the flawed but still often arresting “The Breakers” 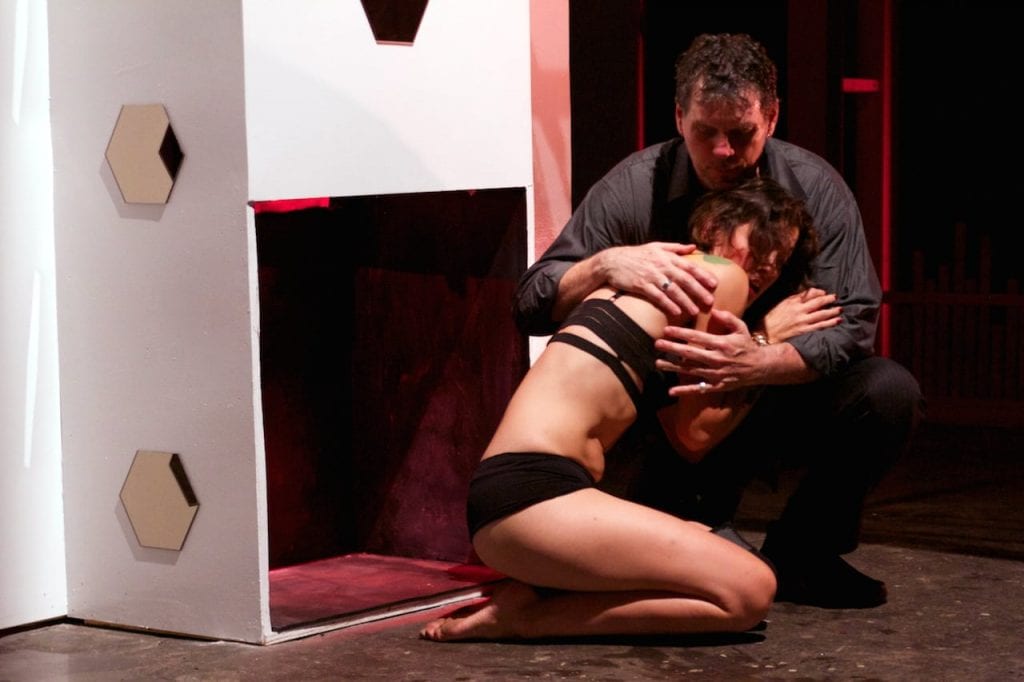 Angèle Masters and Kevin Stillwell in The Breakers. (Photo by Arno Hunter Myers)

Even from the opening toast, it’s clear that things aren’t going well for Eliot (Kevin Stillwell) and his wife Alice (Angèle Masters) as they welcome guests to their house-warming party. Still, they end their welcome by inviting everyone to enjoy the visit to their home, and over the next 90 minutes, everyone can indeed do just that.

The Breakers is the latest interactive performance from 7 Stages theater, currently running at the Goat Farm Arts Center through May 10. The performance takes place in a specially designed set built inside the Goodson Yard warehouse building. The action takes place in a house with several rooms but no exterior walls, allowing audience members to wander freely through the performance and see it from any number of angles.

Writer-director Michael Haverty creates a portrait of the darkly troubled but ultimately loving relationship between Eliot and Alice. Most effective are early scenes in which audience members stand in for guests at the housewarming party. Some audience members get a house tour from Alice, who, in spite of her crisply chic appearance is barely staving off a full-blown meltdown, and other audience members are shown around by Eliot, who is likewise succumbing to the pressures of a failing business and a troubled marriage.

The show’s best scene has the couple selecting a few audience members to stand in as close friends and dinner guests. The majority of the audience stands outside and watches as the couple begs their closest friends to invest in their home security business, a fitting dramatization of the couple’s desperation pathetically poking through their carefully maintained social facades, all masterfully handled by the two leads.

The show is at its best during straightforward scenes of naturalistic drama, but Haverty has the action veer into many flights of fancy and several surreal, dreamlike scenes.

Alice is a pill-popper and an alcoholic, and Eliot is dependent on some sort of topical hallucinogen he hides in his office. We often see their hallucinations, and the house itself seems to harbor some malevolent supernatural force.

These scenes vary in their success: some, such as Alice being shoved into the refrigerator and then reappearing later from down the chimney, have a lovely, old-school, surrealist edge, while others such as an S&M-inflected dance/fight between the couple (he’s wearing antlers and a hood) seem silly and overly long.

There aren’t many characters in the show itself — we have the central couple, a mysterious woman in gold and two anonymous assistants — which develops into a problem in narrative development. We understand early that the relationship is codependent and turbulent, but there’s not much further to go from there, other than providing us with more details, since there are so few other people around.

Nick Kahler’s set is interesting, but it’s too small, raw and sparse to make a convincing stand-in for the home of a wealthy couple. Several scenes are inventively interactive, but for much of the show, audience members wander to a vantage point and watch a scene much as they would in the conventional theater.

Still, though not every scene succeeds, at its best, The Breakers confidently breaks with convention to paint an intriguingly dark portrait of a marriage on the brink of financial and emotional collapse.