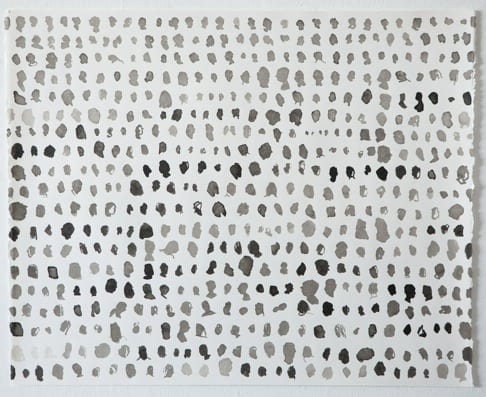 Review: Amy Pleasant’s archaeology of her own past; Pete Schulte’s meditative drawings, at Whitespace Amy Pleasant continues her exploration of archaeology and how the human figure in art history has shaped our understanding of the human experience in re/form, a thoughtful show of new work that fills Whitespace gallery with drawing, painting, sculpture and personal artifacts through February 15.

Drawings and works on paper in ink, linocut and collage are joined by a few small oils on canvas to occupy the front room in what the gallery describes as the artist’s “archaeological dig of her past work.” Shadowy fragments on a spectrum of white to gray to black accrue to create a whole that is greater than its parts.

The human form is pervasive, represented in tiny profiles and silhouettes in gray and black, entwined bodies in tangles of flesh pink, and other figures, alone or paired, upright and walking or inert in unmade beds. The idea of human presence, if not represented on the paper, is there by association — open doors and empty rooms alluding to its absence.

In the one large painting in the room, The Black Wall, at 72×60 inches, a human “head” in three-quarter profile, matte gray on a white ground atop a crisp black border, turns away from our gaze, or toward us, or not at all. The Birmingham-based artist gives us just enough information to make us wonder and begin to form ideas about what we are seeing, but not enough to resolve them. Clues, but not answers. As W. H. Auden wrote in “Archaeology,” one of his last poems: “Knowledge may have its purposes,/but guessing is always more fun than knowing.” Pleasant makes perfect use of such ambiguity.

Archaeology, that hybrid of science and humanities, only gets us so far in our understanding of what is true of past human life and culture. We attempt to know others by the artifacts they valued. This idea becomes autobiographical in the next gallery, where Pleasant displays a head-shaped rock from her own childhood archeology.

The relic, which she recovered from the east Tennessee lake that bordered her grandparents’ home, sits in the corner of the room beside a knee-high personal photograph of the site where she found it. During her childhood, she and her cousins created a stacked rock “castle” from the rocks they found below the surface when the TVA periodically lowered the level of the lake, only to have it disappear from view when lake levels rose. Perhaps the mystery and the real or imagined loss of something tangible planted the seed of Pleasant’s search for understanding through recoverable form, whether literal or metaphorical.

Her found rock serves as a rough parody and probable inspiration of the sculpture that dominates the room. Head forms sculpted in gray clay rest atop red cedar pedestals of varying heights, arranged in a way that invites the viewer to walk through and around them. These fragments, these almost-heads, are vivified by what is not there, evoking comparison to Rilke’s Archaic Torso of Apollo.

They seem burdened by attrition or loss, made more profoundly themselves by only hinting at what they were and what they are no longer. Inscrutable, they illustrate the weight of all they cannot tell and we cannot know. At first glance, they seem to be facing away from you, but they continue to “turn away” as you circle: in archeology, as in art, we can approach the thing, but we can never really know it. Sharing the space with the sculpture are two large paintings that seem realized from, and weightier versions of, the gestural drawings and marks in ink seen in the front room and on the long scroll nearby. Untitled, (Rows III) presents rows upon rows of thumbprint-sized shapes in black and light or dark gray ink. The shapes most often coalesce to form small silhouettes — in our minds, if not on the paper. I noticed the shadow of my own head on the paper as I engaged the piece and wondered if the artist had intended this interaction as another fleeting moment recorded in time.

The dramatic Stack, a 60×72-inch canvas, is filled with a congeries of heads. Some are lightly painted, vague, almost sketched. Others are defined, impasto versions in matte or thick, glossy paint, in pensive downward gaze. Two, also 60×72 inches, lives up to its name with paired forms, heads and shapes, including a painted version of the small found metal form the artist hung on the wall across from it — a serendipity she had noted and enjoyed.

Two large wooden panels lean against the far wall of the space, creating what the gallery calls “pin-up walls.” The sketches, Xeroxes, photographs and other personal artifacts lend a storyboard effect of influences and suggest the intimacy of the artist’s studio. Ideas, images and questions particular to one artist’s search, but edifying for us all. As in archeology, the greatest reward may be in the investigation, and guessing is more fun than knowing, especially in the hands of someone as generous and talented as Amy Pleasant.

Between Moth and Flame, a solo show by Pete Schulte, occupies whitespec, the small gallery across the terrace. Fourteen small works in graphite, ink and muted pigment on paper line the walls of a cellarlike interior, which complements the meditative qualities of the work and imparts the intimate, enclosed feel of a grotto. (Gallery owner Susan Bridges likened the space to a minimalist temple.) Pete Schulte: I Asked Hank Williams, ‘How Lonely Does It Get?’;
graphite, acrylic ink, pigment on paper.

With a deft and confident handling of materials, Schulte has made elegant, restrained work that he describes as operating “in the liminal zone between presence and void.” Nowhere is this more apparent than French Film Blurred, parts 1 and 5. They evoke the sublime beauty of Hiroshi Sugimoto’s long-exposure photographs of movie screens in empty cinema houses and vacant drive-ins. Time and timelessness are rendered simultaneously. In some, the artist manipulated the overhead lighting in a way that seems to let the image inside the hand-painted frame spill onto the wall outside it.

The graphite bars of Sounds Like Someone Else’s Song (F.H.) from 2012 or Between Moth and Flame from 2013 vibrate against clean whites or float James Turrell–like on muted background colors making the image appear to hum and introducing a different element of time stilled. (The actual hum coming from the HVAC equipment overhead reinforced and enhanced this sensation.) A trio of images hints at architectural references. I Asked Hank Williams, ‘How Lonely Does It Get?’ has the air of a faded Venetian palazzo as seen from the Grand Canal or a skyscraper’s many windows reflecting a roseate sunset.

Between Moth and Flame proves an apt name for Pete Schulte’s hypnotic work. An ineffable quality of light within these drawings pull on the viewer just as the flame lures the moth.