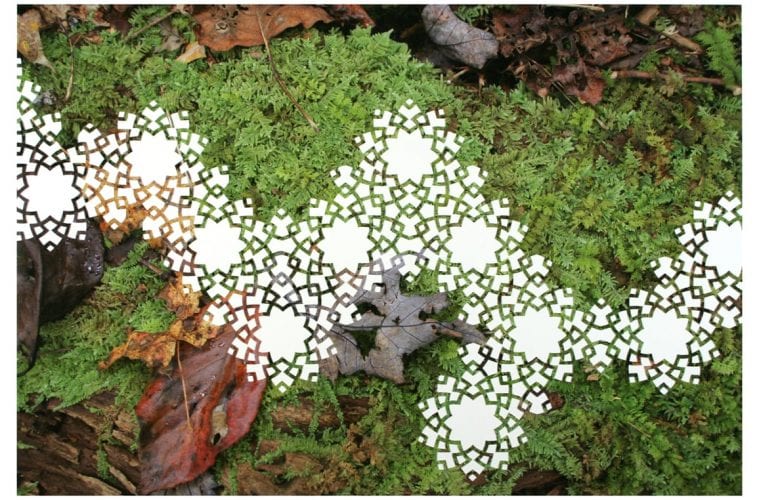 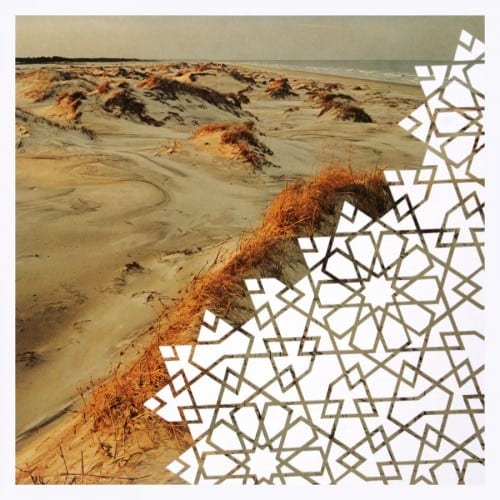 We need new metaphors for the interconnectedness of everything.

The old chaos-theory cliché that a butterfly flapping its wings can eventually cause a storm on the other side of the planet only engenders a sense of helplessness; we can’t keep track of the doings of every butterfly, but we can study the potentially large consequences of small actions, once those actions have been multiplied sufficiently and/or inserted into particular complex systems.

Classical Islamic geometric patterning, used in everything from screens and tiles to book pages, arose from a realization of the complex consequences of a minimal number of far from obvious interconnections – so far from obvious that mathematicians have only recently discovered what they are. So whether or not they agree with Islamic philosophy’s version of the notion of the Unity of Being (a vision also found in the neo-Platonists of the Italian Renaissance), artists have found potent metaphors in this subset of the history of design.

Dayna Thacker, in particular, has seen the correlations between ancient notions of the Unity of Being and contemporary intuitions of the webs of mutual dependence found in ecological relationships, and ultimately of the invisible threads that hold the universe together. (No, really: the thoroughly hardheaded physicist Heinz Pagels once tried to make his readers visualize the structure of a meaningless cosmos in terms of a vast network of vibrating bedsprings.)

The artwork in Thacker’s “Theories of Everything,” at Barbara Archer Gallery through May 4, arises from her theoretical interests in sacred geometry, string theory, and ecology. But her visual transformation of those interlinked interests will mesmerize even the least theoretically minded of viewers. 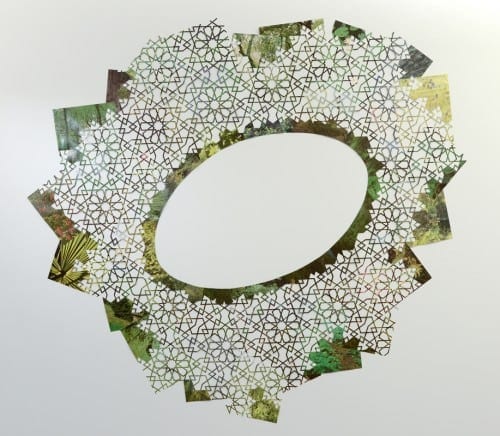 Thacker begins, for the most part, by seamlessly collaging full-page book and magazine photographs of nature; linked by color and natural pattern, some of the images flow into one another with such intrinsic grace that it comes as a shock to realize they depict quite different sets of objects. Then she cuts out webs of geometric patterns, using templates that she herself created via computer from the smaller illustrations available in such books as Keith Critchlow’s classic Islamic Patterns.

From there, each artwork develops in its own distinct direction. Some individual photographs present the void left by the template cutout (a cutout that is sometimes then situated atop a very different photograph, adjacent in the exhibition).

Most of the collages dissolve from the specificity of leaves or forests into the lacework of geometric pattern that ultimately links the image on one side to the otherwise independent image on the other—or, in a few cases, to the world at large that is implied by the unframed presentation of the larger works. The invisible geometry that underpins the gallery itself and the viewers in it becomes united with the visible geometry of a pattern that could, in theory, be extended infinitely. 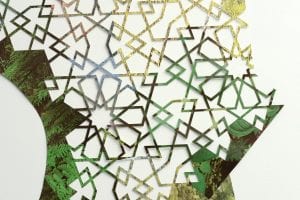 Thacker’s titles deserve contemplation in their own right—the linkages between the individual works and the phrases that title them in such works as “Theory of the Scent of Pine Needles,” “Theory of Condensed Thought,” and the witty diptych “The Prevalence of Reason” and “The Pervasiveness of Rhyme” are yet another example of the interconnectedness of all things, language and its objects of reference included.

None of these metaphoric implications may be immediately obvious at first viewing. What is overwhelmingly obvious is the immense beauty and diversity of this combination of natural and geometric patterning. This is not heavy-handed allegory; it’s art, pure and simple – or more accurately, pure but not so simple.

And yet it is also urgent allegory, however graciously subtle its message might be. Thacker is painfully aware of the threat that our shortsightedness poses to our own survival and that of the planet at large, and is trying desperately to get us to see more widely, and to see more abundantly. The exhaustive (and physically exhausting) precision of her hand-cut geometric networks is meant to communicate a sense of the larger issues on which our well-being ultimately depends.

Gallery talk: Thacker will discuss how she has done it all – and there are an immense number of ways, including one image in which the images of specific flowers in the original photographs have been left intact, spilling over into the geometric pattern – at 2 p.m. on April 14.