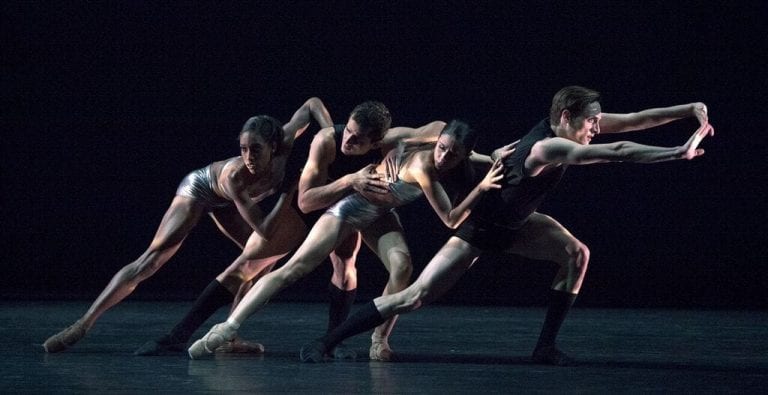 Now nearing the end of its final season under the longtime artistic direction of John McFall, Atlanta Ballet presented 20/20 Visionary, an all-over-the-map triple bill promising “a mash-up of cultures and styles reflective of the vibrant diversity of [Atlanta].” Only one of the pieces performed at the Cobb Energy Performing Arts Centre last weekend referenced Atlanta, though all were created exclusively for the company.

In his explanation video (to my dismay, a choreographer video was projected before each piece, erasing the opportunity to find my own entry points), Moultrie said he wanted to “to push dancers to physical heights they haven’t reached before.” I found this comment a little condescending and clearly untrue, given that the dancers are already adept at the work’s highly classical ballet/jazz vocabulary. Assisted leaps moving backwards instead of forward and the occasional roll to the floor hardly constitute new physical heights for dancers of this caliber.

Despite the work’s basic choreographic structure, the fiercely talented Atlanta Ballet dancers, with help from evocative lighting design by Robert Hand, Jr., stirred palpable excitement. In the third and most successful section, dancers darted across the stage with mind-bending speed, the women’s loose hair flying as the men tossed them in the air.

I could have done without the many literal references to boiling water (the piece was ostensibly inspired by tea): a circle of dancers popped and bubbled around a soloist, a moving pack flailed their arms and undulated their spines like cooking pasta. I longed for something deeper, perhaps a reference to emotional boiling points like frustration or anger. Instead, the dancers flashed big smiles and whipped effortlessly across the stage. One would expect a payoff given the title, but “Boiling Point” never reached a boil. Like heat on a stove, the music controlled this work and when the heat cut out, so did the dance, mid-lift.

In “Playground,” the evening’s standout, British choreographer Douglas Lee treated the gorgeous minimalist score by Jeroen van Veen like an old friend or lover, weaving movement and music together so tightly it was hard to tell where one stopped and the other began. The set too — a forest of walls varying in size and shape — echoed the music’s sparse and jumpy eeriness. Slick and detailed, the movement coiled, rolled, twisted and punctuated the dark world of “Playground.”

But for the second time, I wished I hadn’t seen the explanation video, where Lee talked about exploring play and delving into his childhood memories, both fun and frightening. Again we heard one thing and saw another. At one point, the dancers turned a wall around to reveal a chalkboard with the sentence “Jackie must remember the steps” repeated over and over again like a sick childhood punishment. With Lee’s in-depth explanation replaying in my mind, the moment felt gimmicky, a context overkill that cheapened the experience. I tried to block out his words and get lost in this twisted world that (except for the title) was anything but “playful.”

No matter, really, because “Playground” showcased the dancers’ versatility and illuminated how much the company has grown and matured under McFall’s direction. Tara Lee, now in her 20th season, looked better than ever and Jackie Nash brought a raw power to the role I have never seen from her. Douglas Lee’s choice to create a ballet for five men and two women added another level of sophistication, as the traditional ballet gender roles muddied a bit. The men, especially Brandon Nguyen and Christian Clark in standout solos, seemed to revel in the sinewy, sensual movement. Masculinity and femininity — so often important in ballet — wasn’t so much redefined as it was refreshingly erased.

“Home in 7,” the triple bill’s closer and most perplexing work, came complete with a 13-page program of poems, the work’s libretto. In her video, choreographer Amy Seiwert explained how she came to make a piece about Atlanta having never visited the city. Smartly, she enlisted help from Morehouse graduate and spoken word artist Marc Bamuthi Joseph, who wrote seven poems ranging in topic from the Atlanta Braves to the allure of the Southern belle. Inexplicably, though he wrote the poems and has had since the work’s premiere in 2010 to memorize them, Joseph read all but one from a paper in his hand. It was jarring, not least in part because he was mobile and interwoven into the stage’s visual landscape.

But Joseph’s poems are deliciously detailed and, set to live music composed and performed by violinist Daniel Bernard Roumain, they certainly evoke a sense of place. Many tugged at the heartstrings. But one has to wonder: Whose experience is this? Seiwert’s choreography — sometimes a literal interpretation of Joseph’s words, sometimes seemingly unrelated — bumped up against the work’s other elements without really asserting its importance. Even the dancers, flawless up to this point, faltered a bit with some timing problems, and I was left wondering how all these ideas were connected.

Despite some missteps, Atlanta Ballet’s clear penchant and talent for contemporary work stood at the forefront of 20/20. I hope the company will continue to support and commission new work after they bid adieu to McFall, a visionary in his own right.