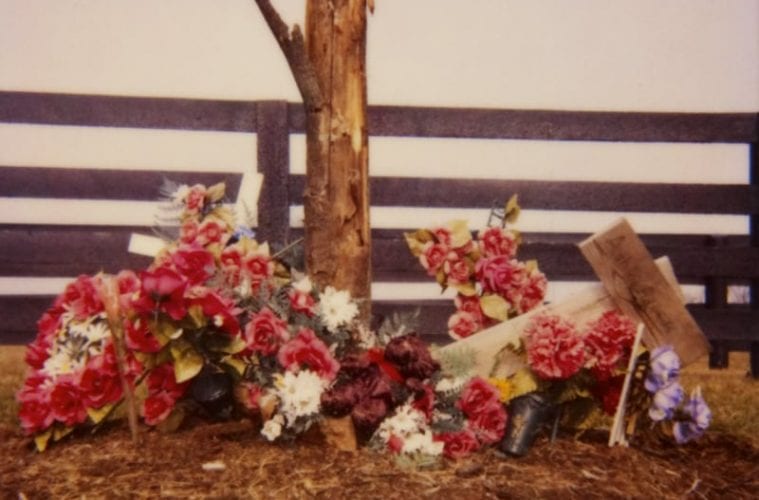 “Shared Southern Stories,” at Emily Amy Gallery through November 24, offers a sampling of work of the up-and-coming visual artists who are profiled in The Oxford American‘s art-themed February edition. Recommended by gallery owners, curators, critics and other artists across the region, they present freshly contemporary takes on the traditional and give us a small window onto the new South.

The exhibition showcases the work of nine of the 100 artists on the magazine’s list — less a slice of the pie than an amuse-bouche, but the sample is tasty nonetheless. The artists represented all offer very strong and distinctive points of view.

Amy Pleasant of Birmingham, who is heavily represented in the show, is the most purely painterly of the bunch. Her Abstract Expressionist oil paintings reside in a terse binary universe where serendipity meets strategic mark-making. In some, black, cameo-like heads seem to emerge from cosmic chaos where identities are formed. In others, such as “Embrace” and “Scene,” the relationships among her figurative shapes are tenuous, rendered as oblique metaphors for the social acts depicted. Notions of race and identity seem to be Pleasant’s touchstones in her deft yet lightly woven narratives. Wilhelm’s collage-like reworkings can be seen as a social critique of class, culture and traditional Southern values as well as a stylistic mash-up of eras, styles and techniques. In each, his irreverence and bold use of form and color create a tension that upends the stasis of the old guard.

Also reconfiguring the traditional, New Orleans artist Dan Tague, who recently enjoyed exposure in The New Yorker with his “The Price of Freedom” series, offers one of his iconic “money shots.” Tague folds ordinary dollar bills in such a way as to create a message within the reordering of the letters and then photographs the result. His eye for clean graphic design makes his imbedded messages read like Pop Art protest posters. As with many others in his money series, “Don’t Tread on Me” clearly speaks to the costs of our American freedoms and the price we pay individually and as a nation.

Nikita Gale of Atlanta takes a more personal approach. Her three pieces on view here, part of her “Convergence Series,” appear to be autobiographical. In each, a Polaroid portrait of an individual or family members rests upon a background of fabric — either an item of clothing worn by one of the subjects or a pillowcase — and is then photographed, producing an imagined family narrative where sensory nostalgia takes center stage. The symbol and the thing itself co-inhabit this narrative, where memory, reality and the creation of fetish-like heirlooms converge.

Keliy Anderson-Staley is also keenly interested in the construction of family narratives. In her installation “An Archive of Inherited Fictions: Imagined Family Heirlooms,” nine wet-plate collodion tintypes and 16 framed prints are arranged as a single piece: a large assemblage of portraits, letters, vintage fabrics and other memorabilia that work together as a cohesive unit.

Through the inclusion of portraits that clearly cross boundaries of time, class and race, Anderson-Staley offers a meditation on the creation of a family history and the way we connect the dots among the disparate stories in our ancestral chain, our relatives and, finally, ourselves in the construction of identity. The tintype portraits in and of themselves are transfixing; the silvery “other era-ness” of their surfaces lends an evocative, nostalgic and somewhat haunting element, adding gravitas to the collection. New Orleans artist Monica Zeringue‘s graphite drawings are also a departure from traditional portraiture. Often using multiple pre-pubescent images of herself, Zeringue’s dreamy, surrealistic drawings conjure up notions of the self as connected to a specific place and time, yet they seem to transcend these specifics through a regenerative mutation. She appears to be revisiting her younger self and imbuing her with special powers, perhaps in an attempt to gain back some psychological control. Characterized by clean lines and strong imagery, these metaphorical mutations can be read on several levels simultaneously. Photographer Joshua Dudley Greer shows five portraits from his series “Working Class.” Made during an extensive series of road trips throughout the U.S. from Greer’s home in Johnson City, Tennessee, these large-scale color images document various individuals either engaged in their occupations or posing, unflinchingly, in their work garb. The portraits are as much about the subjects as the world they inhabit, although the characters and compositions vary widely.

The strongest of these images, “A Roadside Dancer Waiting for Customers,” has the most compelling back story: the reduction of Native American culture to a roadside attraction in the southern Appalachian Mountains. Greer presents revealing snapshots of America; his subjects have an iconic quality that transcends their individual identities and exposes a cross-section of the nation’s collective psyche: the good, the bad and the ugly. Likewise, Atlanta-based photographer Phillip March Jones presents a series of Polaroids that document roadside memorials. He has taken on a heartfelt task. His images of impromptu, homemade roadside markers created to memorialize a victim of some road tragedy are simple and straightforward, yet they represent a longer history of folk-style grave marking. Jones captures the subtle beauty of these markers, which are still part of the Southern landscape and its spiritual underbelly.

Tennessee native and photographer Jessica Ingram also documents the South with her luminous images of rural landscapes. Fascinated by the unmarked locations of so many of the pivotal incidents of the civil rights movement, Ingram captures these sites and the surrounding environs with a keen sense of historical narrative. Images such as “Tallahatchie Flats, Greenwood, Mississippi” and “Midnight, Mississippi” reverberate with atmosphere. It’s a shame, though, that in a show titled “Shared Southern Stories,” the back stories of these photographs aren’t shared.