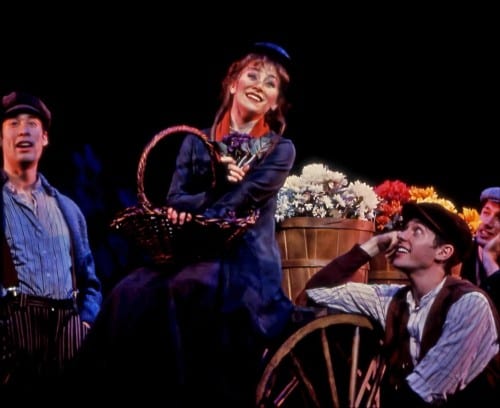 It’s been a transformative year for young Aurora Florence. In May, she was still a musical theater undergraduate at Brigham Young University. By September, she was both married and touring the country as Eliza Doolittle in a new production of Lerner and Loewe’s “My Fair Lady.” That’s a metamorphosis that would turn even Eliza’s head.

“I auditioned in May, one month before graduation,” Florence explains. “I had worked with the casting director before, and she knew I could only miss a couple of days of school.” When Florence got the role and mentioned that she was engaged, the casting director asked what her fiancé, Jeff Dickamore, did. She said he was a musical theater major also, and he ended up being cast in the ensemble.

“My Fair Lady” is scheduled for five shows at the Cobb Energy Performing Arts Centre December 8-11, which counts as a long run on this tour. Because it’s not an Actors Equity production, the show has been playing mainly smaller venues in smaller cities, with lots of one-nighters and bus trips to places like Davenport, Iowa, and Paducah, Ky.

“It’s a very tiring, rigorous schedule,” Florence says in a telephone interview from — where else? — the cast’s touring bus. “We’re not getting a lot of sleep.”

Florence, 22, said she was a little intimidated about tackling one of the most iconic female roles in musical theater. “I didn’t know if I was ready for it. There’s still lots I can learn as I go along with it. I just do my best to be humbled by it, but to be confident. I try to look at [Eliza] through the text and not necessarily through the stars that have already done it.”

She was not, however, intimidated by Eliza’s Cockney accent, which has to be strong but comprehensible in the play’s first half.

“I’ve always loved accents and I grew up goofing around with them with my family and friends,” she says. “I guess I’ve always had a knack for them. In college I took a dialect class where we studied different dialects, including Cockney. The type of Cockney I learned wasn’t quite as raw as what the director was looking for, however, so they had to rough it up a little bit more. Eventually we got there.”

While on the road with “My Fair Lady,” Florence and Dickamore are chronicling some of their adventures in their blog, “The Adventures of Husband and Wife.”