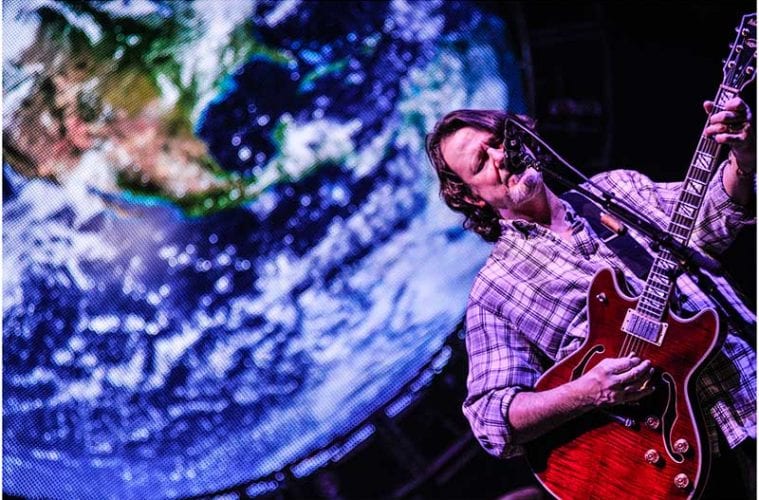 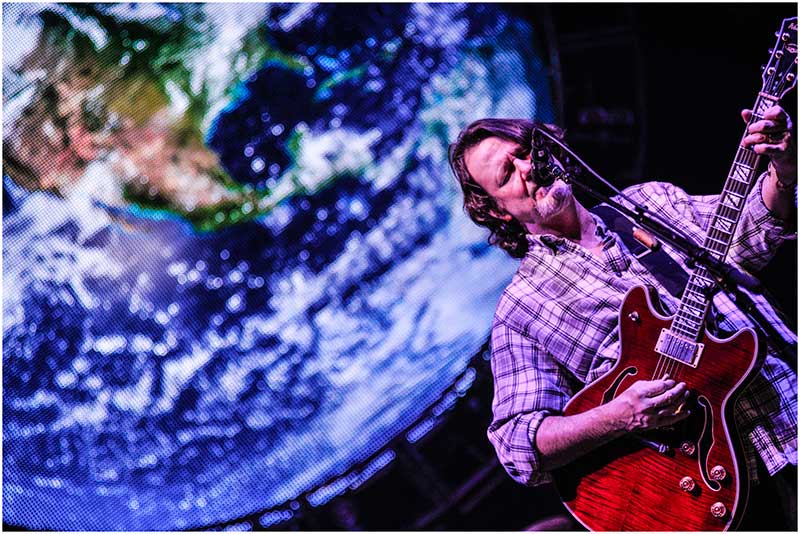 Widespread Panic was founded in Athens in 1986. (Photos by Andy Tennile)

The Athens-based Widespread Panic is one of the most successful touring bands of all time, and they’re still standing as strong as ever almost 30 years into it. Their loyal fan base — many of whom have followed the band since 1986 — will not only travel across the country, but will also travel out of the country in order to experience one of their shows.

New Year’s Eve at Philips Arena was once a Widespread Panic tradition — they have played to a sold-out house there 20 times, a Philips record. Panic returns to Philips for a New Year’s Eve show for the first time since ringing in 2010 there and also will perform tonight at Symphony Hall for their annual “Tunes For Tots” benefit.

Widespread Panic singer John Bell recently sat down with ArtsATL and offered his thoughts on a wide range of topics, from songwriting to late founding member Michael (Mikey) Houser to his love for fried chicken and, of course, Panic’s return to Philips Arena. This is the first of a two-part interview with the soft-spoken, down-to-earth musician know to fans as “J.B.”

ArtsATL: This year your “Tunes for Tots” show takes place at the Atlanta Symphony Hall. How did playing for this charity originally start, and then roll into a longstanding tradition for Panic?

John Bell: We were aware that music programs through the public school system were getting ditched left and right, and we thought that was a shame. We thought it’d be worthwhile if we could help by providing some extra money and help keep some of those programs alive. It was our longtime friend and agent, Buck Williams, who actually had the original, specific idea. And since we do a New Year’s show every year, we just decided we’d add a show on front of that at a smaller club. And we love the chance to play those smaller venues; it’s a lot of fun for us. We filter all that comes from it over to the kids for their music programs. We’ve been more than glad to make it a tradition. 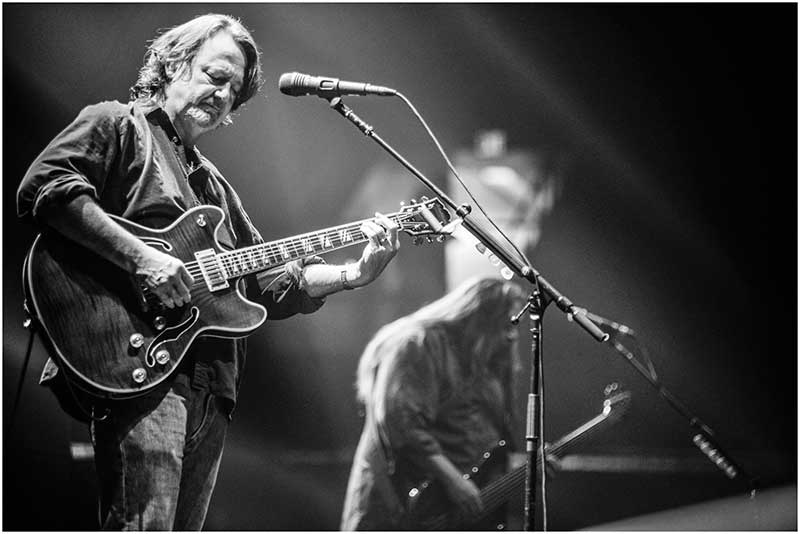 ArtsATL: What motivates Panic to be involved with so many charitable causes?

Bell: It just seems like the right thing to do. As you can imagine, we get a lot of requests and we can only do so much. To be able to go and take the bull by the horns and choose our own batch of charity events is the easiest way we’re able to do all we can while also making sure the money raised is going to the places it needs to go.

ArtsATL: What turned you on to music?

Bell: Mostly, it was a handy escape. It was a fascination, but one having no expectations. A guitar was always sitting there if I wanted it, but it was never a burden. I was just kind of fooling around and without knowing it, I became attracted to the songwriting and how far the music would go.

ArtsATL: Did you have encouragement from your family?

Bell: Well, yeah, but I’d say the best encouragement from them was they didn’t push it on me. They made available to me guitar lessons, but I wasn’t grooving on that structure. I’d probably apply myself a little better now as I have more respect for that process, but back then it just felt like I was going to school on Saturday and I was like, “Oh, crap.” So, as far as encouragement, they never messed with the environment around the music. They never pushed anything on me or expected anything of me after I started showing an attraction for it. They didn’t get in the way. That was so important to me. I remember my parents let me trade in a bunch of Christmas presents so I could buy my first electric guitar and amplifier. I had to get the guitar and amp myself. But, there again, the fact that they were allowing an amplifier inside the house was, you know, pretty darn nice. 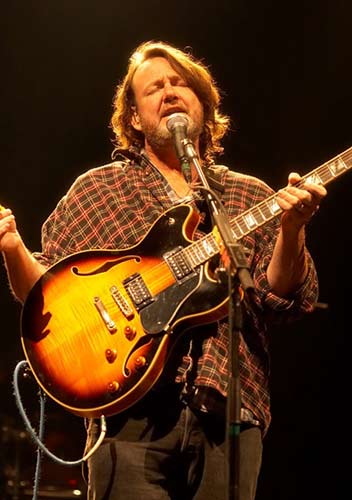 ArtsATL: Name a few of your musical inspirations that helped encourage and frame you.

Bell: As I was coming up, luckily, there were people presenting themselves musically to that voice — where their words seemed to originate in them and it let me know it was possible to try that on my own. That’s what I strive for. Stevie Ray Vaughan, Hendrix, Jerry Garcia, Van Morrison all pop into my mind.

ArtsATL: You just shared that when you were a teenager, you weren’t “grooving on structure.” How about conformity? What thoughts does the word conformity conjure up for you today?

Bell: A couple of things, and not necessarily good or bad. My initial thought is one of falling in line and the acting out a personae which you think is expected of you in a certain situation — whether it’s a social situation, a job or a role — something important to you like being a mother or father or teacher. But conformity could be a great starting place for you. It could represent that place where you can learn things from the past, and as you get a little more tuned in to how things work, you can add in your own experiences and tweak it all and then move beyond conformity.

ArtsATL: Any personal experience with that?

Bell: When I was a little kid I used to fight tooth and nail about having to wear a coat and tie to dinner. And now I sometimes actually like to dress up and go to a nice place.

ArtsATL: Could the change in your attitude toward wearing a coat and tie possibly be attributed to the fact that you now have a say in the matter?

Bell: (chuckles) The change could well be attributed to that part of me which resists being told what to do.

ArtsATL: Staying with the topic of clothing, someone handed me a small sticker at a Panic show this summer. It read, “John Bell, Making Black Jeans Look Cool Since 1986.” You also tend to favor flannel shirts. Is there one word you’d use to best describe “J.B. Wear”?

ArtsATL: Would you say, then, that life is too short to not be comfortable?

Bell: Yeah, I’d say comfort and the path of least resistance are my two big motivators.

ArtsATL: In spite of approaching the music business and audiences in a less traditional way than most other successful bands, Panic became, and remains, a monster business enterprise in the industry. Was the “blazing of your own trail” mentality an organized strategy, or has your business savvy fallen into place naturally along your journey?

Bell: There are folks we have working for us, and on our behalf, who understand the market we’re in and how the systems of the music business work. That is, they fundamentally know how that system traditionally works, as well as where there’s a little more leeway for business creativity, and that’s worked great for us over the years. But on our end as a band, it’s not like we were trying for that. We definitely weren’t recognizing a formula and then playing that game.

First and foremost, we just started playing music together. Whatever came after that — songs that came out, or the audiences that came out and, eventually, the making of a little cash — those were all by-products of the very first thing that brought us together: just exploring music together. If you want to call it a strategy, our strategy is the same now as it’s always been — to focus on the music and trust that the other stuff will appropriately fall into place. It would be easy to focus on the money and not writing songs, but we’ve always just wanted to focus on the music and to put our energy into the music. Hopefully, the other stuff comes after that. And, this is trusting in and relying on the “woo-woo” factor, which definitely does scare the pants off the traditional business model. Now that I think about it, it’s not really quantifiable. (chuckles) But, you know, we started in the “woo-woo” business, so we’ll just keep it right there.

ArtsATL: What’s the best thing about the “woo-woo” business for you?

Bell: It’d have to be that feeling of stumbling into something — a realm of creativity — whether you’re sitting down writing a song or you’re on stage and it’s happening spontaneously. You know things are happening and you’re a part of it. You’re not controlling it as much as experiencing it. Like, when you’re on stage and it seems as though a door opens and you just go with it. You’re exploring. You go, “Wow. That’s new.” That’s the best part.

Bell: It’s not a lot of fun being away from home so long when you’re on the road. So that’s probably the toughest one to reckon with. 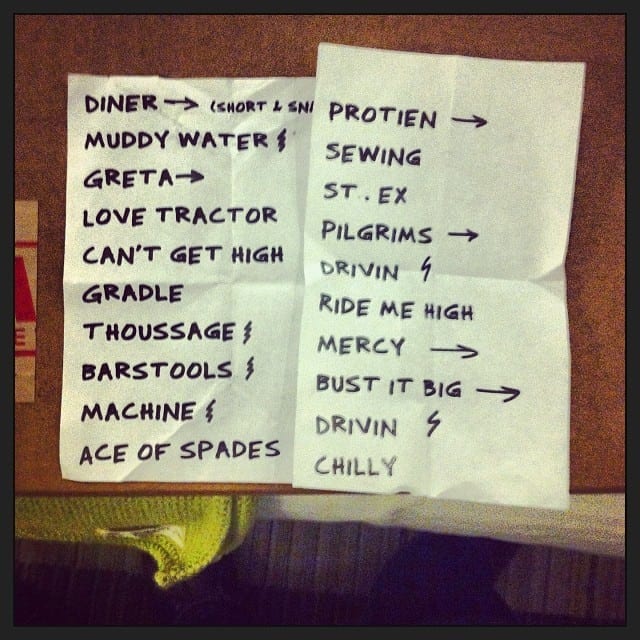 Bell: Everyone prepares in their own way. But for me, about an hour before the gig, I try to minimize distractions that might present themselves and try to get into the frame of mind of applying yourself to the music and to each other in a musically social sense. We don’t really have to do a lot of stretching, but that’s what it is. Basically, it’s like stretching before a sports event. For me, there’s some slight physical things to get your hands limber and your body parts moving so you’re not stiff in the beginning.

ArtsATL: Share a little about the making of Panic’s infamous set lists.

Bell: We jump on the bus about four o’clock. We sit down with a written list ’cause it’s a long list and would be kind of hard to remember. We look at it and consider what songs we’ve played recently and try to avoid those so we can play an entirely different show than the one we played the night before, and the night before and the night before that. And it gives us a chance to revisit our whole catalog so we maintain a familiarity with all those songs, too.

And then basically, we just start from scratch. Someone might say, “We haven’t played that in a long time, let’s play that.” Sometimes, without meaning to, a mood might develop — just depending on what everyone may be feeling. You might have an idea, like if you’re feelin’ all bluesy that night you might start out with an intention and do it like that. But, then again, I’ve seen it where we’ll make a set list and then we jump back and go, “Oh wow, there’s a mood here which was totally unintentional!”

In tomorrow’s Part II of ArtsATL’s interview with John Bell, he discusses his most memorable moment on stage and what Mikey Houser would think of Widespread Panic today. Plus, his plans for New Year’s resolutions.