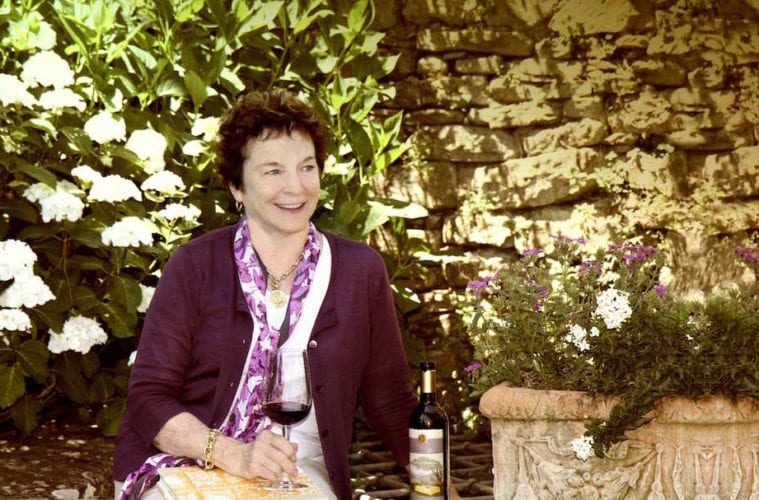 Georgia native and Under the Tuscan Sun author Frances Mayes explores Italy's hidden gems in her new book, See You in the Piazza: New Places to Discover in Italy. (Photo by Will Garin)

The first time Frances Mayes visited Italy in 1970, she experienced a metabolic connection to a country that would become her home 20 years later.

“The irrational flash of ‘This is for me!’ came as a shock,” says the author and Fitzgerald, Georgia native, though she acknowledges her wanderlust began in high school when she first dreamed of escaping her tiny town and seeing the world.

“My family’s always saying ‘You took the first thing smokin’ on the runway out of here!” says Mayes, who divides her time between homes in Cortona, Italy, and Hillsborough, North Carolina. “And I say, ‘Well, there was no runway.’”

Thanks to Mayes’ essays, prose and poetry, her readers have never needed runways or plane tickets to enjoy la dolce vita from her perspective.

Formerly a professor of creative writing at San Francisco State University where she directed The Poetry Center and chaired the Department of Creative Writing, Mayes has written seven books about Tuscany, including a cookbook, a pair of collaborative photo-texts with her husband (poet Edward Mayes) and photographers Bob Krist and Steven Rothfeld and of course, the New York Times mega-hit and bestseller, Under the Tuscan Sun.

With the publication of her latest project, a travelogue called See You in the Piazza: New Places to Discover in Italy, Mayes opts out of throwing in her two cents on cities and sights that have long been synonymous with Italy in favor of exploring roads less traveled. From pristine alpine lakes dotting the Dolomites mountain range to the sun-baked islands of Sardinia and Sicily, this book celebrates the Italian culture, cuisine and people typically overlooked by traditional guidebooks.

In anticipation of her book talk at the Atlanta History Center on Tuesday, March 19, Mayes kindly granted ARTS ATL a phone interview, during which she chatted about See You in the Piazza, writing an unconventional travel guide and coming home to the South.

ARTS ATL: See You in the Piazza reads like a diary or highlights a friend might share after coming home from holiday. Can you describe your writing process for this book?

Frances Mayes: My quest to discover out-of-the-way Italy launched the idea for this book. While traveling in Puglia with my husband, I found the region so startling and different [from Tuscany] that it made me realize it was time to be surprised . . . and find places I’d never been to before. The writing process simply followed 18 months of on-and-off travel that restored a kind of spontaneity and gave me a new sense of how amazingly diverse Italy is. This was the most fun I’ve had writing a book!

ARTS ATL: One of my favorite passages was your memory of a day spent with a young couple, Antonio and Elizabetta, who showed you the most beautiful views of Sardinia, and your conclusion that “one of the great views is Elizabetta’s big genuine smile.” What do you think the writers of typical travel guides miss when they overlook more personal moments like the one you describe with Elizabetta?

Mayes: I think what they miss is the human contact. They’re about where to go and what to see, but for me, travel is about meeting people along the way. They represent the spirit of the places themselves. One piece of advice I have for everyone traveling in Italy is talk to everyone. Italians are friendly, warm, generous and welcoming. It always amazes me while traveling how often people give you things. I was in Calabria recently, and we couldn’t even get our bags on carry-on because we had so many jams and honeys and olives . . . all this stuff that people had given us. That’s just a symbol of what fun the travels [are] there if you really open up to the people. 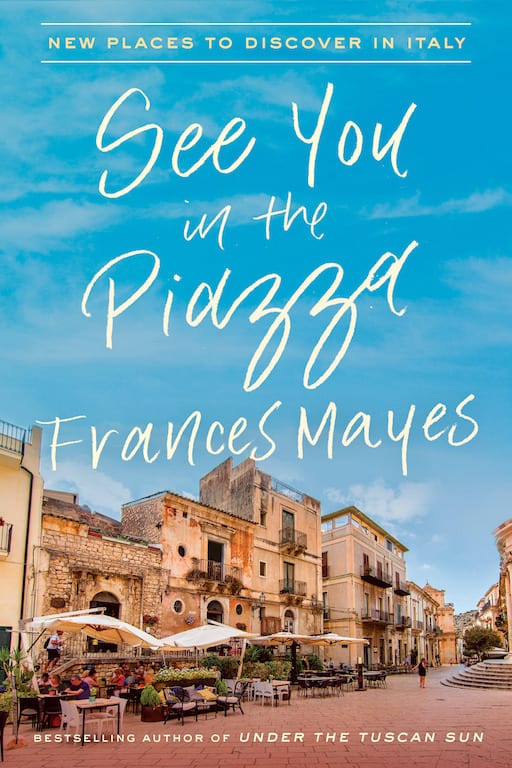 See You in the Piazza is a new type of travel guide — one that reads more like a personal diary and offers readers a look at Italy’s lesser-known cultural treasures.

ARTS ATL: When your grandson’s camera gets drenched under a waterfall, you silently think, “Remember this . . . this is it!” Do you think there’s something that travelers miss when we focus on capturing a moment in photographs on our phones or cameras rather than being present and enjoying it in the moment?

Mayes: Photography is irresistible, and I love seeing my grandson wanting to capture an image. But you can forfeit seeing things in real time if you’re always looking through a lens and only able to experience where you were later. Photography can also be intrusive. Particularly where you see people taking these selfies — just looking at themselves and not looking at the Tower of Pisa.

ARTS ATL: See You in the Piazza is not illustrated with pictures. Was that ever a consideration?

Mayes: No, it wasn’t. My publisher didn’t want a coffee table-sized book, and we just wanted it to be a narrative. But I’m just finishing a book now for National Geographic on the 20 regions of Italy, and it’s going to have tons of photographs!

ARTS ATL: While wandering around a church in Trentino, you admire the clever levers, locks, hinges, knobs and decorative flourishes and say: “Touch them, and you touch the hand of the artist.” Who taught you to observe, see and feel the way you do moving through life?

Mayes: Before I started writing prose, I wrote poetry and taught poetry for years. I think poetry teaches you to see in images, and I guess part of my training, while writing poetry, is working with the image. I hope it sharpened my way of seeing the world.

ARTS ATL: You’re a gypsy at heart who has made a place for herself in a culture that values family ties over individuality, not unlike the Southern United States. What inspired your homecoming to the American South?

Mayes: I find a lot of parallels between Italians and Southerners. It’s not just the heat and the hot summer and the sale of watermelons along the road. It’s this very extroverted, welcoming, hospitable attitude toward other people. I always identified with the Southern landscape and still do. I love the black swamps, the beautiful rivers, the cypress knees coming out of the water and the alligators. I even like the violence of the landscape and the tornadoes.

A few years ago, I was in Oxford, Mississippi, during a dreamy October weekend on a book tour and experienced a connection with the place. I called Ed, who was in Italy picking olives, and said, “What do you think about moving back to the South?” He’d gone to university in Virginia and always liked visiting down South with me.