Georgia author Ted Dunagan has created a niche for himself in the genre of young adult fiction.

Although Dunagan lives on the shores of Jackson Lake, near Monticello, memories of his Alabama childhood populate his four-book series, which follows the adventures of Ted Dillion, a white boy, and Poudlum Robinson, a black boy, who are growing up in a hardscrabble rural community barely recovered from the Great Depression.

Their escapades echo Huck and Jim’s from The Adventures of Huckleberry Finn, and Dunagan tackles much of the same thematic territory as well, exploring the impact of racism and poverty through the eyes of two plucky kids.

ArtsATL: Did you always want to write for young adults?

Ted Dunagan: Young adult fiction found me rather than me finding it. I didn’t realize that I was writing young adult novels until my publisher told me that’s what it was. One aspect of writing these novels that I didn’t foresee was the opportunity to connect with so many young people. I have visited over 240 schools and talked with over 13,000 school children. Although my books are marketed to ages 8 to15, high school seniors identify with my characters, too.

ArtsATL: What inspired your series?

Dunagan: When I was 9 or 10 years old, I discovered Jack London, Mark Twain and many others. Mark Twain inspired me the most. I would read these writers when I wasn’t supposed to — late at night or in school. I was supposed to be learning the names of rivers in the classroom, but in my mind I was floating down the Mississippi River.

Most of my novels come from my memories. The setting is real, all based on my childhood near Coffeeville, Alabama. I lived there until I was seven years old. Some of the characters are also based on real people. The character of Ted is based on me. The Ted in the books is older than I would have been in 1948, but I had to change some things around to make the plot work. I actually do have two brothers named Ned and Fred.

Poudlum was a real person. He’s passed away now, but when I published A Yellow Watermelon, I was able to give copies to his grandchildren. He taught me the most important lesson — the one that is at the heart of my stories — which is that we’re all the same. We may look different, just like a red watermelon looks different from a yellow one, but we’re all the same. As for these books being a series, I never intended to write another one after A Yellow Watermelon. The kids kept asking what was going to happen next to Ted and Poudlum, so I kept writing about them.

ArtsATL: You came to writing later in life. How did you begin? 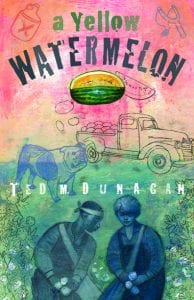 Dunagan: I published A Yellow Watermelon when I was 62. I nearly gave up many times, but then I read something about how Daniel Defoe didn’t publish Robinson Crusoe until he was 62. He had never even been on board a ship. His story encouraged me.

I’ve wanted to be a writer my entire life, but I didn’t have the opportunity to start until about 10 years ago. I didn’t start out writing about my childhood. When I first started writing seriously, I had an editor working with me. I kept showing her what I was working on, and she kept telling me that it was terrible.

One day, she said, “Didn’t you grow up picking cotton? Write about that.” I didn’t actually pick that much cotton, but I realized that I grew up in a unique time and place. She encouraged me to write about my memories.

ArtsATL: What’s next for Ted and Poudlum?

Dunagan: The first draft of the fifth book is pretty well edited and finished, but it might be awhile before it comes out. I might wrap the series up with a sixth about Jake, a character who appears in A Yellow Watermelon but moves out of the story pretty fast after that.

When I speak to the kids, they always want to know what happens to Jake and when he’s going to be back. I’m thinking about calling the last one Jake and telling it from his perspective. It would explain all the things that happened to him since he was Ted and Poudlum’s age. He’s a wise man, and a very interesting character.