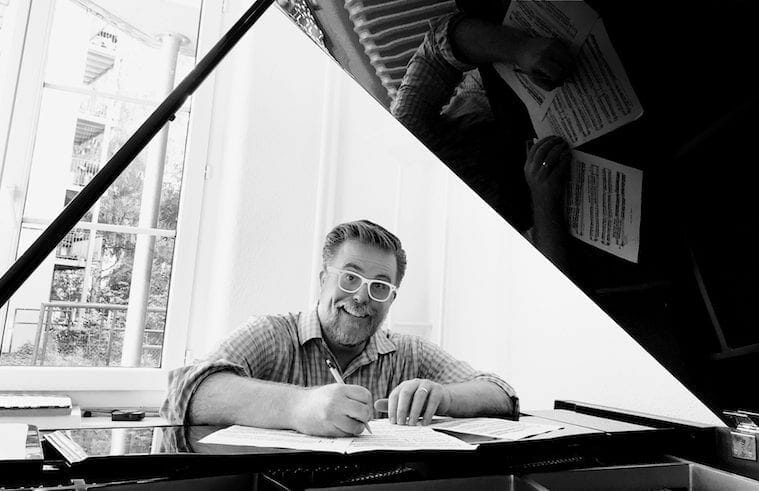 Atlanta composer–lyricist–librettist Haddon Kime — who’s been writing musicals since high school — didn’t have to wait long for a Covid-19 lockdown project. He’s partnered with Out of Hand Theater to create an original 10-minute, eight-song show titled LAG: A Zoomsical.

It screens — on Zoom, naturally — at 8 p.m. Saturday (May 30) and features the talents of Atlanta theater performers Trevor Rayshay Perry, Rhyn Saver, Googie Uterhardt and Minka Wiltz. The premise: A class on meditation and self-care has moved to Zoom because of the pandemic. Four students and an instructor try bravely to attain inner peace. Will they overcome glitchy technology and the deep fear of losing everything or will they implode in the process?

LAG: A Zoomsical is free but you must reserve a ticket so the appropriate Zoom link can be sent to you. After its premiere, it will be on Facebook and YouTube, also for free. Kime, 43, may be best known locally for his satirical Star Wars piece, Wicket: A Parody Musical, done at Dad’s Garage Theatre Company in 2017. His adaptation of Hans Christian Andersen’s The Snow Queen has played worldwide and The Red Room: An Underworld Cabaret was done in 2015 as part of the Alliance Theatre’s Reiser Atlanta Artists Lab.

As far as Kime knows, LAG: A Zoomsical is the world’s first original Zoom musical. ArtsATL chatted with him recently about the tune-filled project for which he’s done the music, lyrics and book. He also directs.

ArtsATL: How did this project come up?

Haddon Kime: It was really quick. I have been the composer in residence at Out of Hand for a year or so. When everybody shut down in March, theaters began wondering how they were going to pivot their programming. Artistic director Ariel Fristoe wanted to create new content that could be produced while social distancing and asked if I had any ideas. She specifically wanted a comedy or a musical drama because everything is so heavy already. The first thing I thought of was a self-care/meditation class online that goes off the rails. Ariel loved the idea. Then we figured out how to make it.

ArtsATL: How long have you been working on “LAG?”

Kime: The project was approved April 12.  The first draft  was not funny enough and Ariel turned it down. The next version was approved May 8, and I’ve been working on it since.

ArtsATL: How did you rehearse, since you and the actors couldn’t be together?

Kime: I took it upon myself to make it as easy as possible for them. They are professionals and came so well prepared. We rehearsed over Zoom. I recorded a full audio version of the show where I sang all the parts and the cast was able to hear their parts. I also had sheet music on hand. Because of audio latency, there is simply no way four people in four  locations can sing together over current videoconferencing technology, so we had to film everyone and then edit it together. We did a first take so I could show everyone what choices their costars were making. The second take was a breeze.

ArtsATL: What’s it been like for you during the quarantine?

Kime: I’m thankful that Ariel had the vision to give me something to do. We all miss being able to have a live audience. We’d like to get back there as soon as possible, but we want to be safe about it. We’ve been disrupted, but this is what we can do as artists now. It has been hard, but there has been opportunity in these challenges. I do think we’ll get back and that Broadway will be the center of the universe once again.

ArtsATL: Do you foresee doing more projects like this?