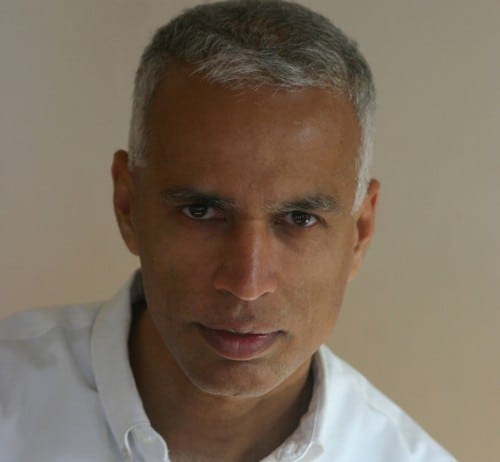 Manil Suri, the accomplished novelist, is also a mathematician. Author of a trilogy written over two decades and just completed with the publication of The City of Devi, he has been teaching math at the University of Maryland Baltimore County since 1983.

It could be the stability of his day job that has allowed Suri to orchestrate multiple identities as an immigrant, Indian and gay man. To balance research interests in the area of finite element methods for partial differential equations, on one hand, with dramatizations of the grotesque comedy and tragedy of middle-class Indian life on the other.

The son of a music director in the Hindi film industry and a schoolteacher, Suri came to America in 1979, ostensibly to pursue higher education. His real motives, as he recently revealed in an essay in Granta, “How to Be Indian and Gay,” were to discover if a) he was a homosexual as he suspected and b) if there was a gay culture in America, as there was none in India.

Set in Bombay (known today as Mumbai), each novel in Suri’s trilogy is named for one of the gods of the Hindu trinity. (The third book, however, makes an unconventional switch, substituting the omnipotent mother goddess Devi for the noble but characterless Brahma, who tops the pantheon.)

The Death of Vishnu (2001), Suri’s magnificent debut, offers a day or two in the life of squabbling residents of a dilapidated apartment building where a servant lies dying. The tenants, most trapped in unhappy lives, can ill afford to have an ambulance pick up the man who ran errands for them. More bereft of generosity or grace than money, they go to war with each other over who should foot the bill for the servant’s death.

The Age of Shiva (2007) spans a couple of decades. Meera, the narrator, is coerced into marriage by her father and then coerced to move to Bombay by a husband who dreams of becoming a movie star. Her revenge is to humiliate and emotionally abuse him.

Ultimately, though, the story is not about a marriage but an even more potent and potentially fatal relationship in Indian culture: mother and son. Suri shows how a suppressed woman’s energies, unleashed, overwhelm the first male in her life she has power over.

Looking at 21st-century Mumbai, The City of Devi is a leap into the surreal and paced like a thriller. As Pakistan and China threaten India with nuclear annihilation, a woman goes in search of her missing husband. Suri offers his first account of a homosexual relationship, complicated by a happy but unconsummated marriage.

ArtsATL spoke with Suri before his appearance at the recent Decatur Book Festival.

ArtsATL: What was the genesis of your trilogy, and what was the unifying principle?

Manil Suri: It’s more a triptych than a trilogy. It developed over time, organically. When I was writing the first book, I didn’t think about the trilogy. It was only when my agent asked me, “What are you going to do next? Publishers want to know.” Suddenly it occurred to me: Vishnu, Shiva, Brahma [the crowning trinity of the Hindu pantheon] — I could write a trilogy. So I told her. Then I thought, it took me five years to write the first book; I don’t want to get into this. So I called her up and said, “Don’t tell publishers about that.” And she said, “Oh no, I’ve already told them. They love the idea, so you are writing a trilogy.”

It turned out to be a very nice project. The first book was a snapshot of India. The second book looks at India’s past after independence. Then I figured, okay, with the third book, the current book, it’s time to look into the future. ArtsATL: Each of your novels is steeped in the religious mythology of Hinduism and the romantic mythology of Bollywood. Why?

Suri: Anyone who’s been to India sees how intermixed culture is with religion, with kitsch. Everything from the sublime to the base entertaining aspects of culture is all jumbled together. I wanted to represent that reality.

In the south of India, there are political leaders who have come from the cinema. A film star became a politician and then in some ads presented herself as the Virgin Mary. That was a big disaster. This idea of mixing religion, politics, Bollywood and sex, that’s what comes to mind when you think of India. I’m trying to put the reader into that milieu.

ArtsATL: In your first two novels, you show a terrible rancor and bitterness between married couples.

Suri: First of all, there are exceptions. In Vishnu, there is the person who lives on the top floor [of the apartment building]. While his marriage might have started with jousting for power, it does end up as a very romantic relationship.

I think what I’m trying to project in all these novels is that in India the scales are really tilted toward men. In the past, women traditionally have had less power when they enter into a marriage. So part of marriage consists of a woman trying to establish herself — exerting her own influence and trying to find her own voice. There is some antagonism that comes from that.

In the new book, there’s not that same antagonism. Sarita has to find out what’s wrong with her marriage and why things are not working the way she expected. That’s really a different problem, a more modern problem. We’re moving away from the past into the future.

There’s also a gay relationship in the new book. India is changing; it’s modernizing. I’m trying to show the evolution and these influences that are being woven into society.

ArtsATL: You’ve lived in the United States for close to 35 years, but all three novels are set entirely in India. Why? How did you manage to keep India alive in your imagination?

Suri: When I started dabbling in writing, my stories were more autobiographical. They were about my life in the U.S. and relationships I’d been in. It took me about a decade before I started writing about India. The Death of Vishnu was supposed to be a short story, but I couldn’t end it, and people really liked it. Suddenly my writing came alive. There was so much potential for drama, for action and deep philosophy.

I tried to break away with this new novel. The gay relationship was supposed to be set in the United States. These two [characters] meet each other as students, then the action goes back to India. Jaz was supposed to be an American character, but it didn’t work. He was just kind of flaccid and dull. Once I changed him to someone who had that American character because he’d lived abroad, but was really Indian, the character took shape and gelled.

I had to throw away about 150 pages and start over again. You have to make these periodic offerings to the gods of literature: “Okay, here, I’m sacrificing this to you.”

ArtsATL: Every writer of a different culture, whether Junot Diaz or Jhumpa Lahiri, handles cultural information and the sensibilities and voices of another people differently. You also have two completely different English-speaking audiences, one in India and one here. Do you have an aesthetic strategy for conveying India on the page?

Suri: That’s a real challenge for writers. You don’t want to pander to any one readership. There are some books in which there is so much hand-holding and explanatory material that it doesn’t come together as fiction. Before I use a Hindi word, I think five or six times whether it’s completely essential or not.

With the first book, I was sending chapters back to my mother [in India]. She was the ideal audience. I thought, if she doesn’t read my book, then that’s really bad. After the first book, I suddenly had a readership I didn’t have before. I had the faces of all these readers in my mind clamoring for more of the same. I had to break away from that. So the second book is very different in tone. The third book is very different in tone from the first two.

I’m trying not to think about readers, and put down a story that’s coming from within me.

It’s the narrative I’m interested in, not the portrayal of India. Whatever you want to deduce about India from that, that’s fine.

ArtsATL: You wrote in “The Daily Beast” about using some of the analytical tools of mathematics in plotting fiction. For The City of Devi, you were trying to generate a variety of possible endings, but the proof you worked out showed you the book could not be completed. You were about to dump nine years’ worth of work when you had a sudden insight into the “metaphorical depth” of the trinities in your manuscript. How did that help you salvage your plot?

Suri: The thing I was most worried about at that point was, am I just writing schlock? It had all the elements of a thriller. It didn’t seem to have any weight. I could come up with some trite shoot-’em-up, bang-bang climax, but that’s not the kind of writer I want to be.

Then it struck me. My God — Vishnu, Shiva and Devi, these are the three deities I’ve been writing about, and I have three [main] characters: Jaz, who’s full of energy like Vishnu; Karun, who’s kind of reserved and more an ascetic like Shiva; and Devi, who’s clearly Sarita. I saw these three characters as stand-ins for these deities, and that’s a deep metaphor if you can exploit it somehow. I came to realize that it’s fine to have a wild ride with this fiction, but it has this underlying layer too, that gave me confidence to go on and finish the book.

ArtsATL: Devi feels like your literary coming out, with the gay relationship at the center and a sense that you’ve given your imagination freer rein to invent India on the verge of an apocalypse. Was writing it a turning point for you?

Suri: Out of the three novels I’ve written, this one depends the least on my own life, and yet it’s the most essential in terms of expressing the heart and soul of my coming out. That’s what writers do. They take everything they’ve been through and turn it into something else.

It was also a turning point in that I’m no longer dealing with reality. With this kind of speculative fiction about the future, the rules are completely different. Yet it wasn’t only about having the gay relationship play out against a wild dystopian background, but also about showing quotidian life: how an ordinary gay couple in India lives.