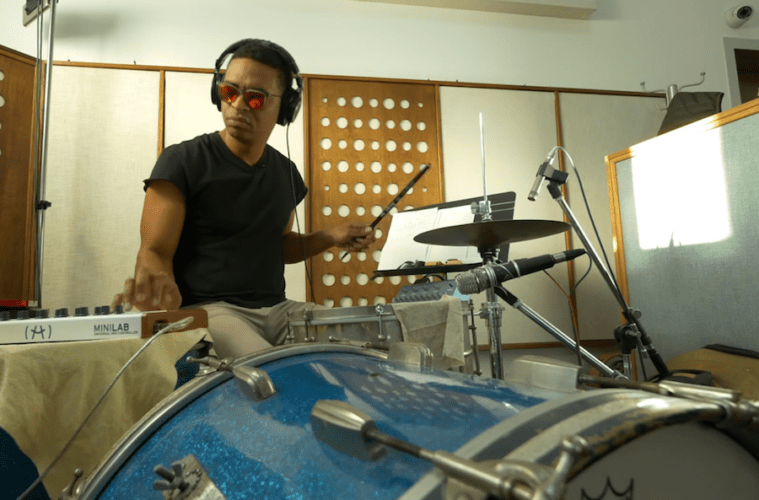 Deantoni Parks, better known as Technoself, is the musical embodiment of free will, consciousness and intelligence. He’s crafted a tool for discovery as Technoself that is exemplified through new-wave experimental drumming and progressive ways of thinking. Parks shares the source code for Technoself at a boutique festival experience called Technoself Immersive. The one-day event kicks off at The Sound Table on Friday, May 17.

Parks is best known for his time with The Mars Volta, Omar Rodríguez-López, Meshell Ndegeocello and John Cale. Technoself emerged as the musical manifestation of man and machine, where Parks performs acoustic drums and triggers samples together in real-time composition.

ARTS ATL met with Parks at 800 East Studios to dive into personal expansion and the world of the creative technologist.

ARTS ATL: How did the idea for Technoself come together?

Deantoni Parks: I was looking for a way to compose in real time. It was built out of my own self-exploration of finding the Technoself and letting it guide me, which is usually what nomenclature is good for. If you come across a word that really touches you, it can do a lot of things for your abstract mind — it can give you a road map. In my personal life, I’ve been focusing more on the now, and this led me to develop a new philosophy and musical approach. So that has impacted me to the point to where I’ve expanded upon Technoself. It’s become a curriculum, it’s become software and it’s become this festival. ARTS ATL: What was the criteria for curating the Technoself Immersive festival experience?

Parks: Reinvention. People that are not static in their own talent. People who are not afraid to do different things or just be themselves. I’m catering to people that exemplify a balance of technology and the self, while not forgetting how important each of us are as humans and the specs we have just in our brain. Our hardware specs individually are just staggering. We all have the same material. Even in the languages that we use there’s a finite number of words, but there are an infinite number of uses of those words. It’s understanding what we do naturally. That’s what I’m looking for in all the artists, professors, people in academia and scientists.

ARTS ATL: Which creative technologist are you most excited to elevate at Technoself Immersive?

Parks: Every person here because it’s underneath a different moniker. It’s not just a performance; it’s a whole new approach. In my mind, they are the most influential people. I’m honestly excited about all of them. The artist Flohr and brain-wave data scientist Grace Leslie are big highlights for me. I’m also excited about having Gil Weinberg there with his specialty in robotics.

ARTS ATL: Why did you choose Atlanta for such a unique festival?

Parks: I feel like it’s still the newest city in the country, but it’s the most influential. I just think Atlanta is the best city to have this be a carbon imprint. I think especially in that this can follow in the form of the amazing progressive efforts of Martin Luther King Jr. and Maynard Jackson. That’s also why it pointed me directly to Edgewood Avenue — it kind of made sense. It’s also in line with a lot of their theories on the progression of the city. Maynard called the airport international before they were even taking international flights. These kind of things really propelled the city — the little things, you know, and that’s just nomenclature. In this same neighborhood that was so progressive from the minority perspective — but affected the majority — brings the kind of atmosphere that I wanted for the festival. It couldn’t exist without those people. I think this is something they would be proud of, actually.

ARTS ATL: What do you want attendees of Technoself Immersive to walk away thinking and feeling?

Parks: I want this to be an experience in the fact that we all want to become better people, but we don’t want to take the time to do so. The idea from the very beginning was to have this be a portal — essentially, an enjoyable cheat code to personal expansion. The self is not a thing but an ongoing process, which is a concept taken from Dr. Thomas Metzinger. That’s the kind of energy that I want you to come with and the idea I want you to leave with. You’re getting a little bit of info literacy and you’re getting some entertainment, all the while expanding.