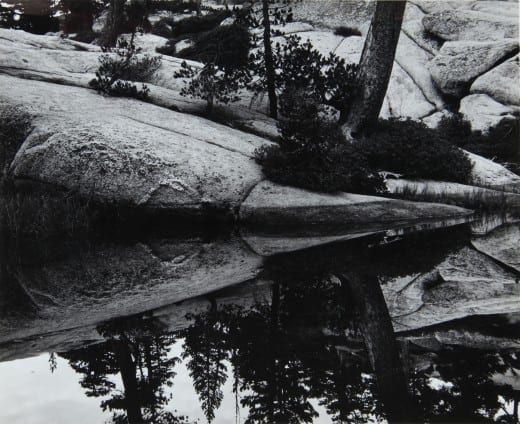 Weston is not an easy name to carry, especially if you are a photographer. Nevertheless, Brett Weston, the second son of master photographer Edward Weston, had a remarkable career of his own.

A contemporary of Wynn Bullock and Harry Callahan, Brett was highly respected for his deeply contrasted landscapes and bold abstractions. A prolific photographer, he built an impressive archive of more than 300,000 photographs spanning his seven-decade career.

But he had a complicated personal life — he married and divorced four times — and when he died in 1993, he left a messy estate. In 1996, after multiple court battles, Oklahoma City businessman and art mogul Christian Keesee acquired the most complete body of work from the Brett Weston estate and established the Brett Weston Archive.

The High Museum of Art acquired 26 prints in 2013 through a donation by the archive and the support of philanthropist Lucinda W. Bunnen.

Brett Weston, an exhibition of the acquired photos, on view through January 10, shows the arc and essence of Brett Weston’s singular vision, encompassing his early work in New York and images of the natural world for which he was best known.

ArtstATL spoke with photography curator Brett Abbott about Weston and the acquisition.

ArtsATL: What is the motivation behind this acquisition?

Brett Abbott: One area we have been trying to build strength in is mid-century, particularly post-war, classic American photography. Last year we had a retrospective of Wynn Bullock, a contemporary and colleague of Brett Weston. We also recently acquired one of the largest institutional collections of Clarence John Laughlin, a great mid-century, Southern photographer. This acquisition was really meant to be part of that metric.

ArtsATL: Why do you think it is important to show this work?

Abbott: His work and a few other photographers of his era represent the pinnacle of achievement in classic black and white photography. And it is an era that is already passing us by. There are very few people that are still working in this mode.

Astral: Were you tempted to exhibit the work of father and son together?

Abbott: Early in the installation process, we looked at a concept that included a Brett and Edward dialogue. Ultimately, we decided to give Brett his full moment on the walls, in the light [laughs]. Brett is not as well-known as Edward, although he was an incredibly talented photographer.

Also, when we did the acquisition, we were already thinking along the lines of this little gallery for a monographic exhibition. It fit so nicely on these four walls.

ArtsATL: Why do you think Brett is not as well-known as his father?

Abbott: It is always hard for a son or daughter, especially if that parent was extremely successful, to get out of that shadow. Brett came from a family of photographers. Cole, his brother, was a photographer. His nephew (Cole’s son) Kim Weston, is also a photographer. So is his niece, Cara Weston. So it is a family tradition.

In some ways, that is helpful, because the Weston name is understood and important. On the other hand, it can be difficult to distinguish oneself.

Also, he came at a time where there were more photographers than during his father’s period. The tradition had been established, and they were finding new ways of expressing themselves within a market that was just emerging.  It was a little more competitive.

ArtsATL: Could you highlight some of the key photographs of this collection?

Abbott: Dune, Oceano (1934). The dune is an iconic subject in 20th-century photography, and oftentimes, when we think of dunes, we think of Edward Weston or of Ansel Adams. But, interestingly, Brett discovered the dunes [in Oceano, California]. He made the first photograph in 1934 and brought Edward [there] later on. Edward made some of his most iconic photographs on the spot that Brett had found.

Bridge Support and Tree, New York (ca. 1940) is a relatively early work, and you can see Brett already starting to experiment with abstraction. Even though it is an image that has depth to it, through his view, the tree and the bridge collapse. There is a repetition of light and dark across the surface, the foreground and background collapse into one plane, and it becomes a sort of abstraction of black and white, with angular forms crisscrossing the composition out of the three-dimensional space.

Ice Formation (1955) was done in the Sierras, where a number of photographers have worked. This one has a definite aesthetic. He tilted the camera down and totally eliminated any sense of the horizon (Edward would rarely fully eliminate the horizon like that. You would always get some sense of depth with him.) The ice becomes these sharp geometric patterns, almost abstract expressionist. They are translated into something that becomes completely disorienting.