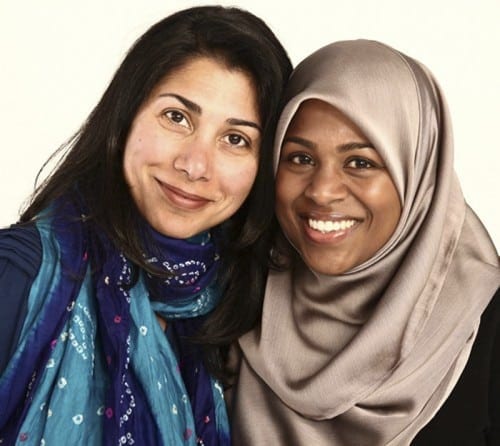 Both ground-breaking anthologies feature memoirs by orthodox, secular and cultural American Muslims from diverse backgrounds including Libyan, Malaysian, Iraqi, Irani, Pakistani, African American, and converts from Judaism and Christianity. I had expected the stories to revolve around the clichéd trope of love versus arranged marriages; instead I was delighted by the variety of topics addressed, from racism within the Muslim community to terminally ill spouses, infertility and infidelity.

Love InshAllah and Salaam, Love explore and demystify the many Muslim worlds between love, sex, and marriage with humor, sincerity and candor.

ArtsATL interviewed Mattu by email. Mattu and Maznavi will appear on February 16 at 5:30 p.m. at Little 5 Points Community Center, hosted by A Cappella Books.

ArtsATL: How did Love, InshAllah and Salaam, Love come about?

Ayesha Mattu: My co-editor Nura Maznavi and I were in a San Francisco café about seven years ago, chatting about how we didn’t see ourselves reflected in the media or pop culture. There were no nuanced depictions of the intelligent, opinionated and funny Muslim women in our lives. Although much had been written about Muslim women, little of it had been written by Muslim women ourselves.

We decided this was an opportunity to start telling our own stories. We focused on the search for love because of the depth and breadth of human experience folded into that universal longing. Plus, we’re huge Jane Austen fans and love a good love story. It was a fun and provocative way for us to challenge and smash the monolith of “the Muslim woman.”

The book, a collection of 25 stories, gave Muslim women an opportunity to celebrate the creativity and diversity of their community, a sisterhood if you will. For readers of other backgrounds, it provided an opportunity to see themselves reflected in that most unexpected place: the heart of a Muslim woman.

After Love, InshAllah was published, we began receiving questions from men, namely, “Where are our stories?” Initially we laughed them off, saying, “Please! That would be such a short book! Men don’t talk about their feelings.” Eventually, we had to take a step back and ask ourselves: Is it that men don’t talk about their feelings, or are they denied the space to do so? ArtsATL: The women and men in both anthologies are refreshingly candid (downright brave!) when it comes to stories on premarital sex and homosexuality (both forbidden by Islam). What have the reactions been to these stories? Did you notice any differences in what type of stories men and women were willing to share?

Mattu: The response to the book has been overwhelmingly positive. We think that Muslims have been waiting for books like these — wherein they see themselves and their lives reflected. That said, homosexuality and premarital sex are challenging topics for many Muslim communities, and some people dismissed the entirety of the books because of that. Which is a shame, because it’s an opportunity to witness the lives of Muslims who practice or live in ways that are different than ours, through which we learn about ourselves too.

The main difference we noted between the women’s and men’s books was how much more open the men were about sexuality, without fear of repercussion. Although Quranic injunctions on chastity address women and men equally, culturally the onus is far greater on women. Whereas some of the women writers were castigated for even admitting to minor physical contact before marriage, the men have been lauded for being “real” when relating far more explicit exploration of pre- or extramarital sexuality. Part of this may be that Love, InshAllah opened up space to have more honest and detailed conversations about these issues over the past two years, but another part of is distinctly gendered.

ArtsATL: In the United States, books that even hint of Muslim women tend to have covers with veils. How did you eschew the typical veil image?

Mattu: Our only request for the cover was: No Veils. The initial graphic designer then gave us cover after cover of veils. It was quite frustrating. But our wonderful editor, Laura Mazer, did something unexpected and rare for a small publisher because it is costly: she switched artists to find someone who could translate our vision. Artist Elke Barter hit it right out of the park on the first go, providing beautiful covers for us to choose from. The one of lingerie strewn across the bed became the metaphor for the collection: Muslim women inviting you into the most intimate parts of their lives and hearts.

ArtsATL: The introduction to Love, InshAllah states the intent is to promote a deeper understanding of what it means to be a Muslim for non-Muslims but also for fellow Muslims. How do these two groups differ in their understanding of Muslim women?

Mattu: Non-Muslims think Muslim women are oppressed, and Muslims have high standards for the conduct and appearance of Muslim women. Neither of which leaves much space for women to experience or admit to a full range of human experiences. The Muslim women in Love, InshAllah challenge those expectations by leading far more complex, interesting and complicated lives than either of those groups allow.

Of course, the Muslim men in Salaam, Love also challenge stereotypes about them as oppressive or frightening by sharing nuanced love stories which challenge those assumptions.

ArtsATL: “Muslims don’t date,” says Ahmed Ali Akbar in his memoir “A Pair of Photos,” and so sums up the great dilemma in Muslim culture: how to find a spouse if you have no way of getting to know them beforehand. And yet these anthologies prove, of course, that Muslims do date even though the concept of dating seems to vary from Muslim to Muslim. Has working on these anthologies changed your own thinking about the dating and love lives of American Muslims and love in general? Mattu: Yes, absolutely, especially because I have a son, nieces and nephews, all of whom I’ll be having conversations with about love and dating soon enough. Too many Muslims are told, “Dating is haram [impermissible],” with that being the beginning and the end of the conversation. Every parent and imam [religious leader] in the nation should read these books. They show the wide range of dating that is taking place in Muslim communities, from family-facilitated courtships to couples living together before marriage.

The most harmful ideas we can instill in our children are that lust, love, attraction are unnatural or forbidden to feel. As a parent you can provide a values system for a child, while also acknowledging the normal desires that make us human. For example, in Salaam, Love, writer after writer talks about the way pornography (instead of parents) shaped their ideas of women, relationships, sex and love. If we create a vacuum of silence and shame around these issues, something else is going to rush in to fill the void.

ArtsATL: Part of the promotional material for Salaam, Love, the Hot Muslim Men Calendar, has also proved controversial for showing shirtless men, “sexing”them if you will. Many Muslims claim this is against the spirit of Islam. What is your take? Would you put out a calendar for hot Muslim women? Can there be complete equality of the genders when it comes to sexual perception and depiction?

Mattu: The calendar was a provocative invitation to a conversation about the power of words. Who holds that power to label, define or limit Muslim men? What words come to mind when I say “Muslim man”? If those words don’t include smart, desirable and accomplished, why not? The only shirtless man on the calendar, Rehan Jalali, is a personal trainer. Being buff is part of his job description.

We also live in a sex-saturated culture of advertising and were interested in challenging a concept of “hotness” that is limited only to outward attractiveness. Frankly, I’m not interested in the celebrity culture of just a pretty face. I find intelligent, beautiful, hardworking and talented men to be hot. The men on this calendar reflect that definition, the racial and ethnic diversity of American Muslims, and the amazing ways they are giving back to society. This calendar is a respectful celebration of our men, who are so often denigrated and demonized in American society.

If there was a calendar of Muslim women that not only respectfully celebrated their beauty but also their intelligence and accomplishments, I’d welcome that. In my opinion, it doesn’t violate the Islamic spirit to acknowledge beauty and intelligence as long as it is done respectfully.

ArtsATL: Your own essay, “The Opening,” talks about how you found an Islam other than the “Islam of No.” Can you elaborate?

Mattu: I was raised with what I call the “Islam of No.” In other words, no, you can’t go to the middle school dance much less the prom; no, you can’t talk to your male classmates; no, you can’t become a writer. All of the negations were couched in terms that hinted that if my desire was not outright un-Islamic, it was at the very least deeply un-Pakistani. It was a culture of negation, offering nothing to replace that void. So much of this negation came from the immigrant fear of losing children to the dominant culture. It is a perspective I have more empathy for now, but I still believe that we are called to have deep, sometimes difficult conversations about love, desire and relationships (familial, communal, romantic, marital, etc.) than we have been having thus far.

How do we create an Islam of yes — of joy, of creativity and love for ourselves and our children? How do we define ourselves not simply in opposition to mainstream culture (which is stereotyped as decadent and immoral), but in a more nuanced manner that recognizes ways in which cultures can work together as well as in tension with each other?

I believe we’re beginning to have more serious conversations about these issues within Muslim communities. The books have helped create a space to have those conversations more openly. And, my hunch is that much of this begins at home in our ways of listening to and conversing with each other respectfully around the family table. That radiates out into the world and impacts all of our other relationships.

ArtsATL: In Deonna Kelli Sayed’s memoir “Even Muslim Girls Get the Blues,” her mother fears that by marrying a Muslim, Deonna will turn into Sally Field’s character in the film Not Without My Daughter, i.e. the Muslim husband will kidnap the wife and kids and hold them hostage. Not Without My Daughter was released in 1991. Pop culture has come far since then with the hilarious Canadian sitcom Little Mosque on the Prairie, and Marvel Comics’ creation of Kamala Khan, a female Muslim superhero who ‘’does not date,” and even your own anthologies. While headline news continues to bombard us with a certain Muslim identity, i.e., veiled and suppressed women and fanatical men, how successful can pop culture be in overturning these stereotypes?

Mattu: Yes, that’s the danger of the single narrative, the same story told so for so many decades that it becomes the truth, the whole truth, the only truth possible about an individual or community. It is slowly changing with the rising tide of Muslim art, literature, music and films in this country. The recent Muslima exhibition is a great example of the power of art to change perceptions on a global scale.

While recognizing that our community’s creative voices must be supported and nurtured, at some point Americans also have to ask, who benefits from the rhetoric of fear? Security corporations, anti-Muslim bigots peddling their books and websites, and right-wing think tanks and foundations, as outlined by the Center for American Progress research report Fear, Inc. So, it’s an uphill task, but perceptions are changing, slowly.