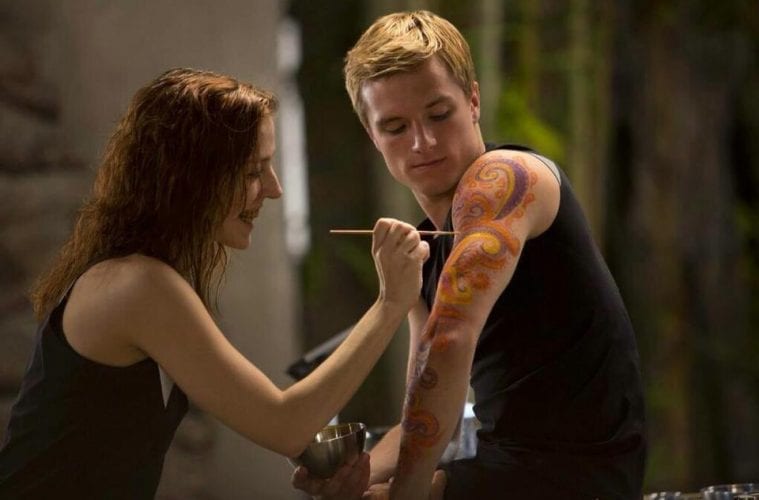 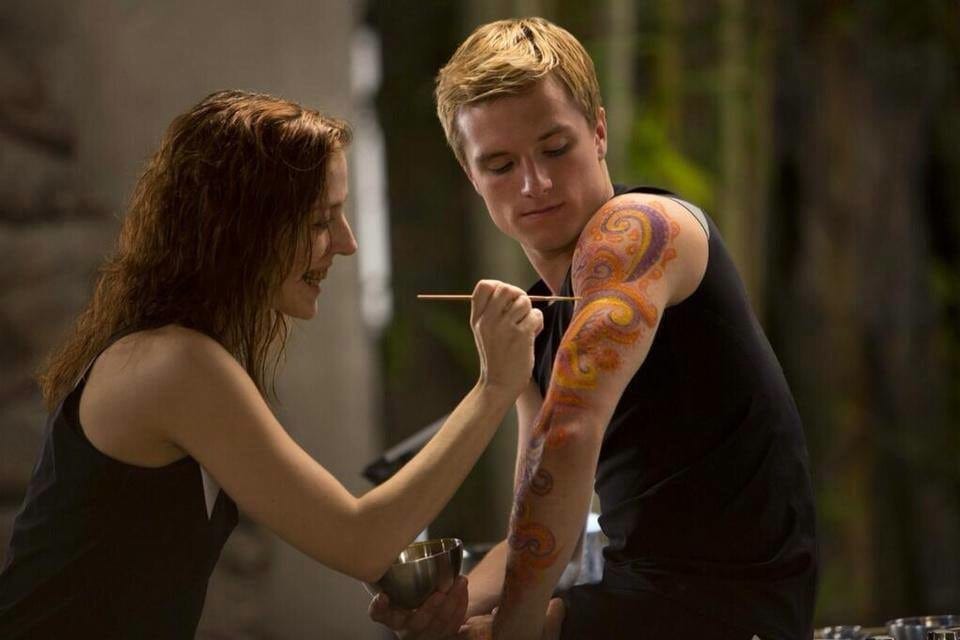 Hayes plays a morphling from District 6 in “The Hunger Games: Catching Fire.”

Megan Hayes was a terrible waitress. “I was fun, I was charming,” she says, “but you didn’t necessarily get what you ordered or have a fork with your meal.”

Hayes laughs as she recalls the various odd jobs she worked while pursuing her acting dreams, a list that also includes cashier and telemarketer. “I could only take three days of telemarketing,” she says. “It was miserable. I just never showed up for the fourth shift.”

Fortunately, Hayes’ clock-punching days are safely behind her. After more than a decade as a mainstay on Atlanta stages, the actor and playwright is about to be seen by her biggest audience yet with a role in the year’s hottest film, “The Hunger Games: Catching Fire,” opening Friday.

For today, we’re on the outside patio of the Starbucks in The District at Howell Mill late on a warm September morning. Hayes, born and raised in Atlanta, is back home for a visit after a move to Los Angeles over the summer, but she wants to make it clear she hasn’t gone Hollywood. 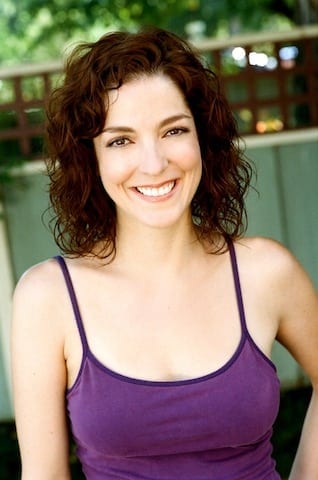 “Forgive me if I keep my sunglasses on,” she says as the midday sun glares. “I’m not trying to be cool. If I tried to be cool, it would be wholly unsuccessful.”

As a child, Hayes never could have imagined performing for even one person, let alone millions. “No one believes me now when I say I was shy, but I really was,” she says. “Painfully.” She dreamed of becoming a marine biologist — “What kid at age 10 doesn’t want to be a marine biologist?” — until a trip to New York City and a ticket to see “Les Miserables” inspired her to swap SCUBA gear for greasepaint.

Hayes says her love of acting overpowered her fear of performing. “I knew if I could be part of telling a story, to move someone like I was moved, that was it,” she says. “So really I didn’t think about going in front of an audience. I just wanted to tell a story.”

After graduating with honors from New York University’s Tisch School of the Arts, Hayes briefly found acting work in the Big Apple before returning to the Peach State and building a steady career in Atlanta theater. She’s appeared in more than 20 local stage productions, including “The Miracle Worker” at the Alliance Theatre; “The Perfect Prayer,” “Charm School” and “Tree” at Horizon Theatre; “Lend Me a Tenor” and “Butterflies are Free” for Stage Door Players; and last year’s “Evelyn in Purgatory” for The Essential Theatre at Actor’s Express.

Talk to anyone who’s worked with Hayes, and you’ll get glowing reviews not just for her performances, but for her offstage persona as well. Words like “generous,” “honest,” “welcoming” and “kind” come up often. She reportedly smiles a lot. In short, she’s just plain nice. 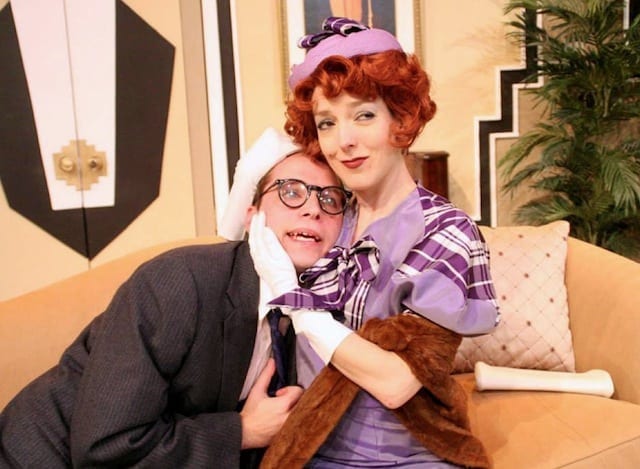 Hayes in “Lend Me a Tenor” with the Stage Door Players.

Colleagues like Robert Egizio, producing artistic director of Stage Door Players, say it’s Hayes’ genuine nature that gives truth to her characters. “She’s got this great personality that allows herself to look foolish,” Egizio says. “She’s not one of those people who keeps up a façade in her real life, so what you see is what you get.”

“Any enemies she’s made have been very well hidden,” jokes playwright Topher Payne. “If there’s anybody who has a negative thing to say about Megan, then I think it would reveal more about them than it does about her.”

Payne wrote “Evelyn in Purgatory” and co-starred with Hayes in the Essential Theatre’s “Bat-Hamlet.” He says Hayes inspires actors who work with her to work harder. “You take more risks with her, because you know she’s bringing everything that she’s got,” Payne says. “She’s not going to ask you to take a bigger risk than she’s willing to take herself.”

When not onstage, Hayes taught acting classes at theaters across town, including the Alliance Theatre, Jewish Theatre of the South and Aurora Theatre. Her knack for working with kids and teens caught the eye of the creative team at Aurora, who commissioned her to write “Unnecessary Monsters,” an anti-bullying play that just won the 2013 Suzi Bass Award for Youth Production. Hayes was also nominated for the annual Gene-Gabriel Moore Playwriting Award, which recognizes a new play by an Atlanta playwright (Payne received the award). 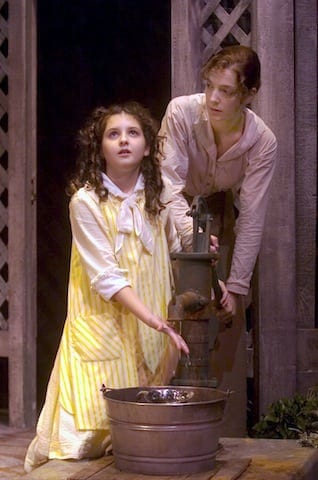 Hayes as Anne Sullivan in the Alliance Theatre’s “The Miracle Worker.”

“It’s very affirming because it’s my first time having ever been nominated as a writer, and for so many years I was shy and not even telling people I was a writer,” she says of her first solo award win. “It’s really an honor.”

Hayes is equally encouraged to see recognition for the play’s serious subject matter. “Bullying is an epidemic and it’s insidious,” she says. “A lot of people are scared to talk about it and they brush it under the rug. If [“Unnecessary Monsters”] illuminated how prevalent and horrendous bullying is to even one person, it’s worth it to me.”

The play’s director, Jaclyn Hofmann, who also heads up the education program for Aurora Theatre, says one of the strengths of the play is that Hayes allowed her natural wit to come through in the script. “With a topic like bullying, you don’t expect it to have comedic moments,” Hofmann says. “But she was so brilliant at putting comedy into the show, as well as showing the truth of the pain and heartache.”

Hayes drew from her own experiences with bullying as a kid and also reached out to her students to make the story relevant for today’s youth. “I didn’t want to be patronizing or condescending,” she says. “When I was a teenager, I wanted none of that.”

“She did a really good job portraying real people in real-life situations,” says high school sophomore Katie Malcolm, 15, who studied under Hayes for five years at Aurora and helped workshop “Unnecessary Monsters.” Malcolm says the play struck a chord with her friends, who told her they related to the characters and were inspired to prevent bullying in their own schools. “It gave me a lot of hope,” she says.

As is all but required for teenage girls right now, Malcolm also happens to be a huge “Hunger Games” fan and can’t believe she’s about to watch her teacher on the big screen. “I don’t even know how I’m going to react when I go to the midnight premiere and see her,” she says. “I’m going to jump out of my seat and be like, ‘I know her! I know her!'” 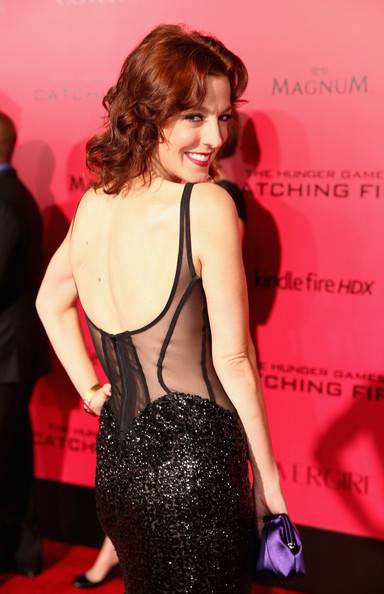 Walking the red carpet at the Nokia Theatre in Los Angeles for the premiere of “The Hunger Games: Catching Fire.”

Malcolm isn’t alone in her excitement about the next installment in the “Hunger Games” movie franchise. “Catching Fire,” which was largely shot in Atlanta at the end of last year, is already on track to be one of the year’s highest grossing films. Advance tickets went on sale October 1 and accounted for 70 percent of Fandango’s online business on that single day.

To land her role, a character known as the female “morphling” from District 6, Hayes first recorded a reading on tape for the film’s casting team, then got a callback to audition in Atlanta for the director, Francis Lawrence, in July of last year. Before she knew it, Hayes was on set with stars Jennifer Lawrence and Josh Hutcherson. “It couldn’t have been a better experience,” she says. “Jennifer and Josh were just so gracious and supportive of me, and who the hell am I? The whole thing was just fantastic.”

Hayes’ character has a small but critical role in the story (she can’t tell us much more) and even months before the premiere, she was receiving emails and tweets from the famously passionate “Hunger Games” fan base.

“What I love about ‘Hunger Games’ is it’s a fascinating, riveting story,” Hayes says. “The reason I got into acting in the first place is to tell great stories. To be in a story that’s going to reach so many people, it just doesn’t get better than that.”

While Hayes’ heart will always be in Atlanta, she hopes her relocation to Los Angeles will help her ride the momentum of “Catching Fire” to even bigger roles. After a difficult year that included the sudden loss of her father, Hayes sees the move as the start of a new chapter.

“[Events like that] give you a gauge of perspective,” she says. “What have I wanted to do that I haven’t done yet? I’ve always wanted to give L.A. a shot. Why not now?”

Her fan club back home has no doubts about what’s next. “It’s only a matter of time before someone in the Atlanta theater community achieves recognition on a national or international level,” Payne says. “Of course it makes sense that Megan is poised to be one of the first to make that leap. It proves that good things happen to good people.”