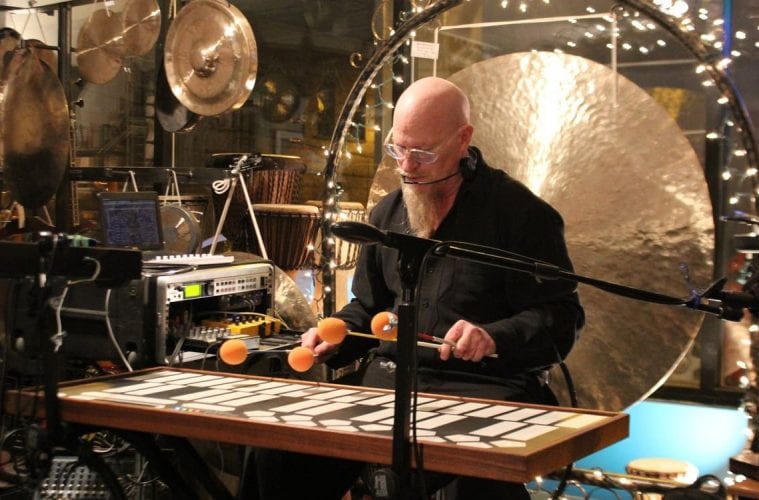 Klimchak performs on a host of unusual instruments. (Photo by Chris Stack)

Atlanta’s unique, eclectic multi-instrumentalist Klimchak will release his new CD, “Klimchak Live! Nostalgia for the Future,” at a pair of concerts this Friday and Saturday at the Balzer Theater downtown. This will be the third summer that he has performed at Balzer, presented by Theatrical Outfit, which was so pleased with last year’s show that it asked him to do a pair this year. Both concerts will begin at 7:30 p.m.

A good chunk of the music will come from the album, devoted to Klimchak’s music for solo percussion centered on the versatile Marimba Lumina, an innovative MIDI controller designed by the legendary Don Buchla. It allows one musician to play live music that normally requires multiple performers.

It took Klimchak nearly three years to develop and record all the music on the album. “It’s only because I picked such a weird process,” he said in a conversation over coffee at Octane on Marietta Street. “Each recording is completely one take, no editing.” Because the music is at least partly improvised, he had to record some 50 to 60 different takes of each track, then pick the best from among them, while resisting the urge to edit and combine partial takes.

“That would have been really easy,” said Klimchak, “but the whole idea was this is a ‘live’ thing. It needed to have that live energy. My big satisfaction was when I recorded the last piece and said, ‘OK, I’ve got all of them.’ Then I deleted all of the other files. Dumped them all, because I didn’t want to take the chance I would go back and pick another one or compromise it [with edits]. So numerous gigabytes went away.”

Though there were no edits to the individual tracks, he said he did add some sweetening to the final mix and did all the mastering himself. It’s the first time he’s mastered a CD.

“The last CD I did, I had somebody master it and he did a great job,” the multi-instrumentalist said. But this time around he didn’t have the money to hire a mastering engineer. Undeterred, he taught himself audio mastering just to complete the project.

“I don’t know that I’m comfortable enough that I would want to [master] anybody else’s stuff at this point. But for my stuff I feel pretty comfortable with it. Unless I were to do something on a major label or something, I’ll continue to master myself. I’m pretty happy with the way it came out.”

Although the reason for this week’s performances is the release of “Nostalgia for the Future,” Klimchak isn’t limiting the concerts to music from it. “I’m going to do at least half of these songs; I may do all of them,” he said.

Klimchak and cellist, guitarist, singer and accordion player Nicolette Emanuelle will also perform some music in development for “The Navigator,” a theatrical production by 7 Stages, at the Goat Farm Arts Center this fall.

“It’s an ‘in-process’ piece,” Klimchak said, emphasizing that the final music will be not improvisatory but a set composition. “Improvisation during rehearsal is one of the major compositional tools I use. I improvise along with the actors as they work out their parts. Ultimately, the music is set as soon as the actors’ parts are set. What the audience will see this weekend is a loose structure which is improvised, because it’s just an idea that we’ll use as a starting point when rehearsals start in September.”

The concert will also include selections from Klimchak’s “Lebeato Lounge” series, with percussionists Stuart Gerber, Olivia Kieffer and Brandon Dodge. One of those, “Synesthesia,” includes red, green and blue flashlights with which the musicians perform rhythms visually. “A fairly simple piece,” said Klimchak, “but the nice thing is that you get to see it and hear it at the same time.”

Also on the menu is an updated version of “Punch,” played on a xylophone made of glass vessels tuned with punch. The audience will be invited to drink some of it at intermission. Klimchak will also probably perform “Tarzan on Acid,” a perennial favorite of fans. “I’ll probably do it,” he said. “It’s such an audience pleaser.”