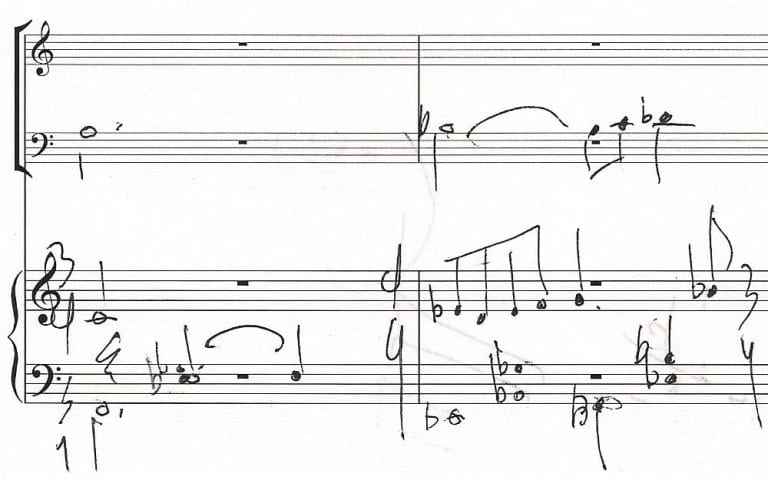 A section of the manuscript for Gresham's new piece "Piano Trio."

Preview: ArtsATL’s Mark Gresham on the art of writing an original chamber composition

I often say I have too many hats and not enough heads. ArtsATL readers primarily know my work as a music journalist and critic, but some also know about my work as a composer. I’ve been given this opportunity to write about the music I create, in particular a composition called “Piano Trio” that will premiere Sunday, performed by the Riverside Chamber Players.

It’s not all that unusual for a composer to also work as a music journalist. The tradition goes back to composers such as Robert Schumann and Hector Berlioz in the 19th century and Aaron Copland and Virgil Thomson in the 20th. For a 21st-century example, composer Kyle Gann wrote for The Village Voice until 2005 and continues to author a column, “American Composer,” for the magazine Chamber Music.

When it comes to music criticism, composers are not “at arms length” from themselves, so they don’t get to review concerts that include their own work (with the exception of Thomson, who was known to have reviewed and written about himself in the third person during his stint as music critic for The New York Herald-Tribune).

There is a juggling of time between the two creative vocations of composer and music journalist. So when cellist Joel Dallow offered me an opportunity to write music for the Riverside Chamber Players, I immediately agreed. Having spent recent months far more focused on plotting words than sounds, a request to write for top-level professional musicians was creatively energizing.

When I asked Dallow later why he commissioned the piece, he said, “It was your beautiful Sonata for Violoncello and Piano. I heard it and was instantly assured that your style of composition was the right fit for my audience. It really is as simple as that.”

That work, written for cello-piano duo Dorothy and Cary Lewis in 1993 under a grant from the Georgia Council for the Arts, was an important point in my career. I’ve been writing music for different kinds of groups and contexts since my early teens, but starting in the 1980s many people began to identify me as a “choral” composer. Perhaps that was because I was often writing short choral works for my own needs as a conductor, even though by the ’90s, professional choral groups such as the San Francisco Symphony Chorus, the National Lutheran Choir and the New York Concert Singers were picking up on my music.

That notion that I was a “choral composer” was a misperception, despite how embedded I had been in the choral world as a co-founder and editor of Chorus! magazine and participating in the origins of ChoralNet. But that Sonata for Violoncello and Piano began to change the misperception and, since the turn of the century, my interests have shifted far away from choral music to chamber and orchestral music. My last composition for chorus was written in 2006 for the Cathedral Church of St. Paul in Boston.

Recent chamber works such as “Mortal Coils” (premiered by Bent Frequency in 2009) and “Genshi” (its official premiere by Helen Kim and Ted Gurch was during SonicPalooza in 2011) are much more representative of what I am doing now, as is “Vagabond Drumming,” a series of “books” of percussion music that collectively span nearly an hour in all.

Curiously, at nearly 58 years of age, this is my first work for a traditional piano trio comprising violin, cello and piano — not three pianos as the title might imply. “Piano Trio” consists of four movements, but at 16½ minutes it is rather short as full-fledged piano trios go. It was intended that way, fitting the original plan for a work 16 to 18 minutes long.

My intent was to finish the entire piece by the end of December, but those good intentions stalled while writing the first movement. Creative roadblocks are unpredictable, and I encountered one in what is now the 10 measures beginning at bar 22. The piano part I was trying to write was musically interesting but harmonically complex, and I never felt I could get it to sound right. I was stuck on that one brief section, continuing to jiggle the handle without results, until finally taking a different, simpler approach that cleared the creative logjam. Nevertheless, the first movement took the longest time to compose and proved the longest, knottiest and most emotionally tense of the four.

The second movement could not have been more of a contrast from the first: slow, simple and lyrical, making prominent use of five gentle beats to the bar through much of its course. The short third movement could be called a diversion of sorts from the first two. Its opening section alternates between scherzo and grand waltz. Almost all of it was written at the piano so that I could feel the hand and arm movements as much as hear the sounds.

The last week of January returned my focus to journalism. I had six assignments in one week: five concerts to attend and review, and a pair of films to review together in one article. That forced me to scavenge for time to complete the music whenever and wherever possible. By the first week of February, the first three movements were complete, just in time for Riverside’s first rehearsal.

The fourth movement, however, was still a work in progress. I could give only glimpses to the musicians, even though I had begun working on it while the other three movements were in progress. My original concept had been for a fugal dance with an emphatic, non-fugal ending. The ending alone had already been completed when the first movement was finished. But now, changes to those plans emerged. After completing the first three moments, the third seemed to demand that an intervening slow section precede the fugal opening of the fourth, so a brief liberamente introduction for cello alone was added, making a different kind of statement about the entire work’s opening notes.

The bigger creative surprises, however, came in working on the middle of the movement. Instead of a predictable formal fugal shape, it began to evolve into something else: darker, freer, but still in contrapuntal play. I finished it within the week, correcting a few typos later as I found them. You’ll have to hear for yourself how the fourth movement’s drama concludes.

The Riverside Chamber Players will perform music by Bach, Handel, Golijov and Gresham on Sunday, March 3, at 3 p.m. at Bridge to Grace Church, 2385 Holcomb Bridge Road, Roswell. Adults $15; seniors $10; students, teachers and children admitted free. Click here for links to a map to the venue or to purchase tickets online; tickets may also be purchased at the door.