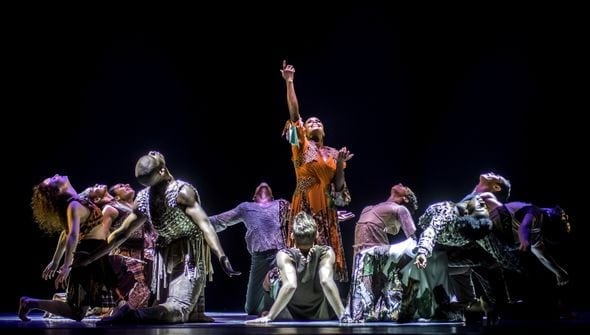 It seemed like an odd Christmas present for a six-year-old kid. It was a gift from my uncle — whom I discovered years later had once been a radio singing star in the West Georgia area — and I unwrapped it with extreme excitement that turned into profound disappointment.

I knew it was a record album and I hoped for something by Elvis Presley or the Beatles. Instead, it was a four-record set called 40 Great Folk Songs: Performed by 32 Famous Artists, none of whom I’d ever heard of. I listened to a couple of tracks, then put it on a shelf and promptly forgot all about it. Several years later, I took out that album — which was released by Radio Shack, of all places — and suddenly viewed it with a profound appreciation. There was an incredibly rich lineup of artists whose names I now recognized: Pete Seeger, Doc Watson, Joan Baez, Judy Collins, the Staples [sic] Singers, Flatt and Scruggs, Sonny Terry and Brownie McGee, and on and on.

As I spent the evening immersed for the first time in the voices of those legendary singers, one performer stood out. She sang with a dark, husky and lonesome voice that seemed to seep into my consciousness and embrace my very soul. The singer was Odetta, accompanied by a single acoustic guitar and a bass on “Midnight Special.”

Robert Battle, artistic director of the famed Alvin Ailey American Dance Theater — which will feature a world premiere production paying homage to Odetta during its five-day annual run at the Fox Theatre — had a similar moment of discovery with the oft-forgotten folk singer.

In 2009, he was invited by Rachel Faro — a singer/songwriter who had produced a Christmas album by Odetta — to attend a memorial service for the folk legend at the Riverside Church in New York City.

“I knew about Odetta only peripherally from the civil rights movement,” Battle said in a telephone interview last week. “There are a lot of heroes from the movement you might not think of. I heard Pete Seeger talk about her and sing her songs. Maya Angelou spoke about her. I thought: this would make a great dance.”

The world premiere of ODETTA is one of 10 dance pieces the troupe will bring to its Fox run that begins Wednesday, including Ailey’s gospel-flavored masterpiece Revelations, which will close each performance. According to Battle, Atlanta is one of the troupe’s favorite stops. “The Fox is an audience like no other,” he said. “Atlanta has a wonderful dance community through Atlanta Ballet and the smaller companies there. The audience has a great knowledge and appreciation for dance. There’s great platforms there for up-and-coming choreographers.”

For the modern Alvin Ailey, it’s new choreographers who keep the company fresh and vibrant. Battle said there’s a deliberate mix of the old and the new. Part of the beauty of Alvin Ailey is that it draws from its rich history, but also infuses its annual tours with fresh works. “That’s a huge part of it,” Battle said. “If you look at a work of art like Revelations over and over, you can go deeper into it. People come to see Revelations, but the first half of the show has new ideas and new experiences.”

Battle is only the third artistic director of the vaunted troupe, and the first not to have danced with the company. Battle never met Ailey, but he has a keen appreciation for the heritage he was handed. “The company has a rich history and I have the opportunity to play off that history,” he said.

Among the new arrivals this year is a restaging of the late choreographer Ulysses Dove’s Bad Blood. Featuring music by Laurie Anderson and Peter Gabriel, Bad Blood looks at the psychological battles between the sexes. “It’s one of the great displays of the power of his work,” said Battle. “It’s brutally honest and in your face, it really gets to the heart of the matter. It’s wonderful to have it back.” Another new wrinkle is Christopher Wheeldon’s After the Rain Pas de Deux. Wheeldon is known to local dance fans for Atlanta Ballet’s renditions of his Rush in 2012 and 2013. “I’ve always thought that pas de deux was a little gem,” said Battle. “It balances the other works on the program. It’s quite beautiful.”

But ODETTA has this year’s spotlight. When Battle became Ailey’s artistic director in 2011, he remembered the memorial service he attended and asked dancer/choreographer Matthew Rushing (a 20-year veteran of the company) to create a work based on Odetta’s life and music. What Rushing came up with moved Battle. “It’s a reaffirmation and celebration of life,” Battle said. Odetta Holmes was born in Birmingham and grew up in Los Angeles, where she got her first stage experience in musical theater. When she began to sing in New York City folk clubs, Pete Seeger championed her and she quickly became a giant on the burgeoning folk music scene.

In 1961, Dr. Martin Luther King Jr. anointed her as “the Queen of American folk music.” Two years later, she sang “Oh Freedom” at the March on Washington where King gave his “I Have A Dream” speech. Among the singers she influenced are Harry Belafonte, Bob Dylan, Joan Baez, Carly Simon and Janis Joplin.

Her most famed songs include “This Little Light of Mine,” “A Hole In My Bucket” (with Belafonte), “Take This Hammer” and “Water Boy.”

Rushing composed his Odetta piece specifically for Hope Boykin, a 15-year Ailey veteran. “She’s brilliant in it,” said Battle. “She’s a beautiful technician. It’s the intent behind that movement that Hope captures so beautifully. She dances with openness and honesty.”

Boykin and Rushing have been friends for 20 years and have collaborated before. But having a choreographer invent a new piece specifically for a dancer is rare these days. “When I found out he created the role for me, I went into the ugliest cry you could imagine,” Boykin said. “It’s a gift and there’s extra pressure; I have to be the best that I can be.” She grew up in Durham, North Carolina, in a household where her father owned 15,000 record albums. She’d heard Odetta through her father, and was familiar with more modern interpretations of Odetta’s songs. “When I heard her versions working on this piece, I thought: I know this,” Boykin said.

Rush’s piece is very precise and demanding. “Matthew is the king of I-do-research-first,” said Boykin. “He knows where he’s going — where it begins and where it ends. It’s great, this piece. I call it a ‘dance-opic.’”

ODETTA premiered December 10 in New York City in front of an audience that included the late singer’s family and celebrity friends such as Harry Belafonte.

The Alvin Ailey schedule for Atlanta: