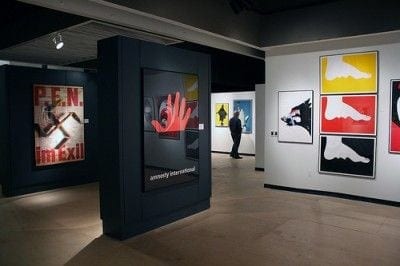 Posters at Museum of Design Atlanta, and a “Morale Hazard”

Museum of Design Atlanta just opened a terrific exhibit, “The Graphic Imperative: International Posters for Peace, Social Justice & The Environment, 1965-2005.” The poster has an illustrious history as a handmaiden of political change. Although you are more likely to find these posters in exhibitions or public service advertising than pasted to the walls of the barricades, they do what posters are supposed to do: communicate their message through an image that is indelible and immediately understood. The visual language is so imaginative and various that anyone who walked in thinking of graphic design as a lower order of fine art will walk out disabused.

Most of the participants are graphic designers. The Guerrilla Girls are included, however, and Barbara Kruger, who started off as a  designer, could have been. Even artists who aren’t interested in the directness and accessibility of these posters could learn a thing or two from them about the beauty of conceptual pith.

Mark Wentzel’s “Morale Hazard,” an installation at The Contemporary (which I discuss in a group review that should appear May 22 in the AJC Go Guide), gets it. You can’t beat a nose-diving Ford Mustang suspended from the ceiling for visual impact, and you’d have to be Rumpelstiltskin not to understand immediately that it’s a symbol of the state of the American car industry.The wall drawing of a horse and rider, another transportation relic, and the Mustang’s V-8 engine atop the feet of antique furniture in the center of the room (in photo) add another layer of meaning. It’s “Ozymandias” meets “The Second Coming.”  The engine scuttles away from the relic of the once-mighty Detroit like Yeats’ creature slouching toward Bethlehem, to become something else.