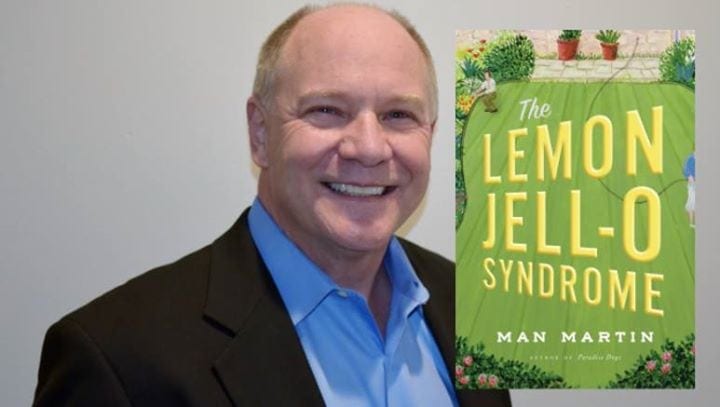 Portrait of a Man: Man Martin, author of “The Lemon Jell-O Syndrome”

We meet at the man’s home, Man’s home, as it is Man Martin’s home where we meet. This is a modest-looking ranch-style house, three bedrooms, with an ample yard that includes a chicken coop and a sprouting garden in the north Atlanta neighborhood of Dunwoody. I arrive with dual purpose: to fulfill the interview portion for this profile, and to help Man Martin achieve a new clothing look for his latest novel’s release, said novel being The Lemon Jello-O Syndrome, out now from Unbridled Books.

I’ll explain the latter below, but first to the former: The man who is Man, is an enigmatic man, to say the least, should you have perused any of the volumes he has penned (the novels Days of the Endless Corvette and Paradise Dogs, published in 2007 and 2011, respectively). He answers the door with a wide grin, appraising my outfit (blazer, cotton trousers, etc.) with, “This is exactly what I’m thinking of.” You wouldn’t think that Man Martin would be thinking of wearing a blazer or trousers or shirt and tie at all. He appears as he has generally appeared over the years I’ve known him: knit collared shirt, jeans, boat shoes. (Disclosure: Man Martin and I both attended graduate school in the New South’s Writing Program at Georgia State University. But, to be fair, I chose enigmatic specifically because I’m not entirely sure anyone can really know him — except maybe his wife, Nancy.) With his Floridian accent and wide smile, Man exudes a cheery disposition, is quick with a quirky wit and waxes philosophical. He’s like some weird mashup of stereotypical-modern-Southern-male-as-portrayed-by-Hollywood, the Liberal Redneck and Atticus Finch. In some ways he’s like The Dude, coming off from off-center, but oddly on point. And his attitude is matched by his writing. Days of the Endless Corvette chronicles the life of a man who falls in love while building a duplicate Corvette out of a Corvette he’s perpetually rebuilding and dismantling. His sophomore effort, Paradise Dogs, is about an alcoholic realtor trying to get his life back together and discover what mysterious entity is buying up all this 1960s central Florida real estate (hint: it has something to do with a cartoon mouse). And this, his third novel, is about a college composition professor and grammarian with a debilitating condition — the titular Lemon Jell-O Syndrome, that on occasion strands him outside a random entranceway — and whose academic career, marriage and entire life he fears is on the outs. Each book is equal parts whimsical, fantastic, very very sad and, frankly, fucking hilarious.

This is why I was somewhat baffled by the occasion of my visit. For years I’ve helped men with their sartorial needs — suits, sport coats, shirts and ties, you know — so I was surprised when Man asked for my assistance. But assist I would, so I arrived at his home ready to inspect his wardrobe and talk about The Lemon Jell-O Syndrome. Luckily, the location of said wardrobe is the closet of his office, the space where daily, after rising at 5 a.m., Man Martin writes his novels, and draws his comic strip Inkwell Forest.

This is what I mean about enigmatic.

I’d known Man Martin for at least five years before I knew that he’d had a career as a syndicated comic strip artist prior to beginning his PhD in creative writing. Inkwell Forest features fairytale/mythological/pop-cultural/made-up characters in the universe that is his Inkwell Forest. The comics often comment on current events. He mostly draws these for fun, and to keep his artistic sensibilities honed.

For most of his career, Man has been a high school English teacher and debate team coach (hence the 5 a.m. start time for the day). In one recently penned Inkwell Forest strip, a big chubster of a kid has tied a string to the end of another, smaller kid’s loose tooth, and the other end of the string to the knob of an opened door. The larger boy says “Okay Billy—we’ll have that loose tooth out in a jiffy.” The second frame depicts the door slammed closed, little Billy’s inert skeleton splayed on the carpet while his flattened skin lies where he once stood, while his companion stares down sadly and contemplates, “A bad day to repeal Obamacare.”

Unprompted, Man tells me about his literary influences. “I learned pretty much everything I know about writing humor from P.G. Wodehouse. I read his books over and over again. And while writing Lemon Jell-O I really took a hard look at Nabokov.” He takes me into another room lined with bookcases. There are his copies of Wodehouse, and Twain, the plays of Sophocles and Aristophanes, and of course the novels of Nabokov. He shows me his paperback copy of Lolita. The margins are scribbled with notes. “I annotated every single instance of alliteration, assonance, consonance, allusions — everything and anything I could find on every page. The man was a genius.” This succinctly illustrates how hard Man Martin works as a novelist. He writes every day. For obvious reasons, during the school year he gets only a little bit done each day. He works more on weekends and during the summer.

Before we head out to a nearby shopping mall so that I can assist Man in the purchase of a new book release outfit, Man regales me with tales from the drafting of The Lemon Jell-O Syndrome. At one point during the many drafts and constant tinkering that Martin undertakes with each of his novels, Lemon Jell-O sat safely on his laptop computer — so he thought. That was until his dog’s barking awakened him late one night and he stepped out of his bedroom and into his living room to discover that an intruder had broken into his house — and was still there. Freaked out that the burglar had taken his laptop, where Man now in retrospect admits that he foolishly had kept the one and only copy of Lemon Jell-O, he hollered at the intruder, and said intruder bolted out the side door through which he’d entered the home and made way for the street. Man took off after him, running in naught but his skivvies, and he chased the thief for over a quarter mile before giving up and turning back home where he realized, thankfully, that his laptop had gone unnoticed.

Later, at a nearby shoe retailer, I tell Man that I’m going to recommend that he purchase shoe trees, an item that, even if I try to train him to use them, I’m utterly convinced he will not keep up with. But in the end, Man does buy them.

What’s significant about this is that Man Martin is at once neat and meticulous (his sentences are elegant: “Sunday, after Mary moved out, promising himself he wouldn’t let his life sink into disorder, Bone made a pot of chili”) and sloppy as hell. I once watched him squirt an entire packet of sweet and sour sauce down the chest and full length of the right sleeve of a white dress shirt without him even noticing once. He laughs at me as I explain that with the shoe trees, the $500 pair of Allen Edmonds he’s selected could last a lifetime. “You’re right about whether or not I’ll do this,” he says. Then he follows this with a very Man Martin-esque phrase: “Oh what the hell; I’ll get the shoe trees.”

I ask Man Martin if he has a favorite among his novels. He says, “It’s going to sound like a cliché, but it’s true, I really do like all of them.” He continues, “I write literary fiction, but it’s not what people think of when they think of literary fiction. What I really write are love stories. I write the same love story over and over again. It’s boy meets girl, boy gets girl, boy loses girl, boy — and that’s the end — the boy gets the girl back or not, and that’s where I stop.” And in fact this is the central plot of The Lemon Jell-O Syndrome. Due to Bone King’s sometimes inability to make his way through a door, his “doctor” (you just have to read the book) tells him that if he completes a little dance, he might be able to make it through these attacks when they hit. All this while Bone’s convinced that his wife Mary is cheating on him with the man who does their yard work. So the question remains: does Bone get the girl back again or not? Of course I won’t tell. But Man, he says, “When I think of conflict, the most interesting conflict I can think of is will a character be loved or not.” And it turns out, when I arrive at his book release, Man tells me that he’s using the shoe trees.