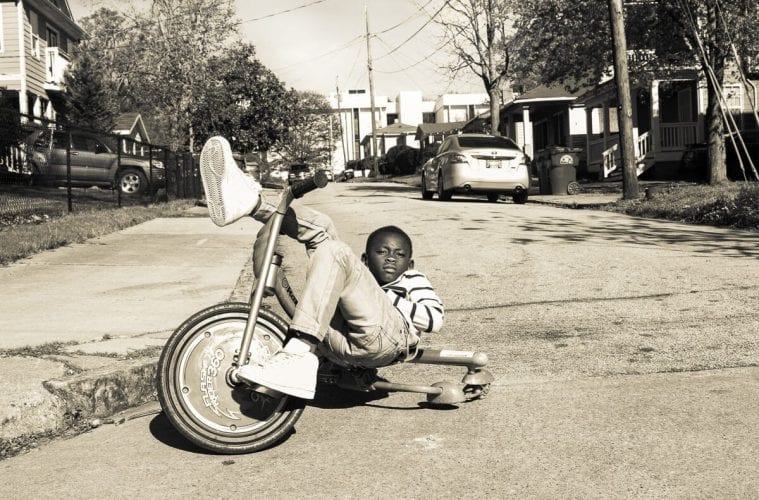 Photographer Rose Smith’s exhibition Inner City Urban: Vine City, on view at the Auburn Avenue Research Library through April 29, documents the people and places of Atlanta’s Vine City neighborhood. ArtsATL recently met with Smith in the gallery to discuss her body of work and reflect on its impact.

ArtsATL: This show evolved from the original public installation of your photographs displayed throughout the city [in 2017 as part of the City of Atlanta’s Elevate public art festival]. What made you decide to have an exhibition here at the Auburn Avenue Research Library?

Rose Smith: My work was downtown for the art installation, so my mentor contacted Morris Gardner here at the research library with an introduction of this work. He said he was a huge fan and would love to have my work here in the gallery if possible, so it went from there. We coordinated and made it happen. ArtsATL: Why is Vine City a particular focus for you?

Smith: Vine City is a focus because my cousins grew up in the West End, near the neighborhood. When I first moved to Georgia, which was in 2006, I would visit them in the West End. My parents and I lived in Cherokee County, which is a rural part of Georgia. I was really interested in understanding why my aunt and uncle chose to raise our cousins in the inner city of Atlanta versus my parents raising us in the suburbs or rural areas and understanding that contrast. Also understanding my experiences, as I would visit my cousins throughout high school and felt as though I was missing some aspect of the black experience. So when I went to college to study photography, it drove me to really dive in deeper into the inner city. Vine City and the West End became places of interest, Vine City particularly because it’s tied to this history of Dr. King, Coretta Scott King and their family who lived in Vine City for a period of time. ArtsATL: The sepia tone of the photographs creates the impression of something archival, which is interesting because these are contemporary works. Does this body of work aim to preserve the past or instead preserve a sense of place with attention to what could change in the future?

Smith: Looking through images of Vine City in the ’60s and ’70s and comparing it to what I see now, I’m combining different aspects of those. This neighborhood is so historic and has value, so being able to add that to my work is crucial, as it speaks to the Vine City of today. ArtsATL: How did you feel when these images were displayed throughout the city?

Smith: While the work was up, I would go downtown and stand by my work to see people interact with them. The feedback I received was interesting. The work was labeled on the kiosks, so some were reaching out to me on Instagram or photographing themselves in front of my work. People would tell me that they really appreciate me covering this neighborhood to bring about awareness and that it was enlightening to them. An installation view of Rose Smith’s work from Elevate 2017.

ArtsATL: Would you seek more opportunities to do work in public spaces after this experience?

Smith: My primary focus now is to do public art. I like that interaction: people interacting with people. Speaking to scale, the prints were so large, it was as if, for example, the photograph of houses planted the house itself in the midst of the park or around the Underground area. Being able to see that interaction is very moving and evokes an emotional response. So I want to do more of this. When working in a gallery space, there’s a certain number of people who will be able to come here, but putting my work in a public space allows everybody to interact with it. ArtsATL: Who are the people in these photographs?

Smith: The people are the residents in Vine City. I started this project in 2015 and talked with so many different residents about the neighborhood. Capturing them naturally in the moment and being able to see their expressions has been the most amazing thing to me and how it speaks through the work. This series covers different neighborhoods and communities but also addresses other factors that go into living in the inner city — i.e., food, health, education. These are all themes that will be in the final show exhibiting next year to close out this project. ArtsATL: What would be the main takeaway you hope viewers get from seeing this body of work?

Smith: I would say the main takeaway would be awareness that urban redevelopment is happening. It’s connected to the whole conversation about affordable housing and gentrification; there are pros and cons to it. My main concern is affordable housing, so being able to educate people on that, allowing that to resonate and seeing what methods people can take to fight for affordable housing because it is a big deal. Being able to have these conversations in the midst of the growth here is important. For me, creating a true narrative matters most.