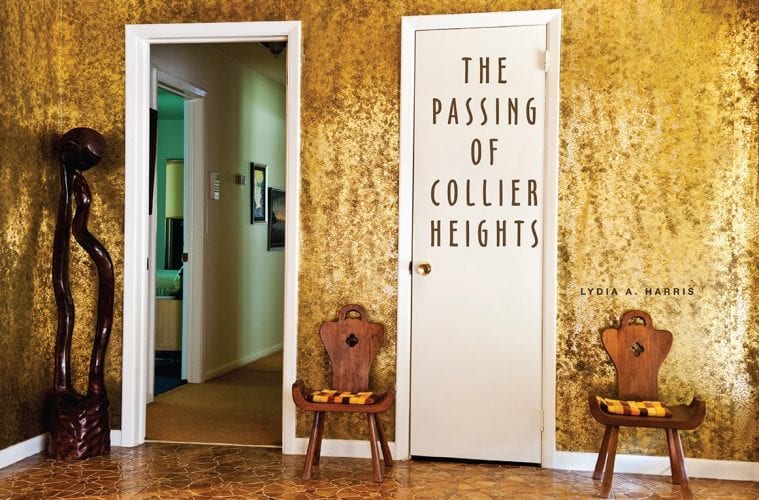 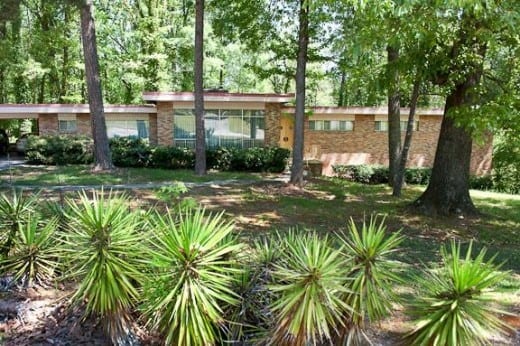 Mid-century brick ranch and split-level homes like those in northwest Atlanta’s Collier Heights can be found across the city and surrounding suburbs.

But Collier Heights is special: It was the first Atlanta neighborhood developed, designed, built and inhabited by black people. During its heyday, it was home to many of Atlanta’s distinguished leaders, among them Martin Luther King, Sr., Ralph David Abernathy, Donald Lee Hollowell and construction magnate Herman J. Russell.

Introduced in the 1950s, the development served the rising black middle class — many alums of historically black colleges and universities (HBCUs) in Atlanta and beyond — who wanted to escape crowded black neighborhoods and could afford high-quality housing stock.

In 1950, when it was still illegal for a white person to sell land or property to a black person, the Atlanta Urban League helped create a consortium of black realtors, bankers and developers who purchased farmland surrounding Collier Heights under an assumed name. After the law was struck down in 1951, the group began purchasing homes in Collier Heights, a working class white community. Once the racial balance tipped, the bulk of the white families moved out.

J.W. Robinson & Associates, an Atlanta-based, all-black architecture firm founded by Joseph Robinson, Sr., designed many of the brick homes, which included such features as walk-in freezers, indoor pools and recreation rooms. The latter were essential because there were no places where black people could socialize and gather other than Auburn Avenue, so they entertained — and met with civil rights leaders to organize — at home. 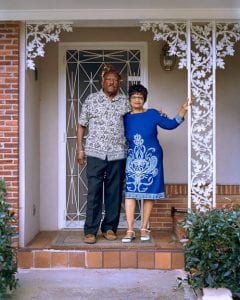 This suburban enclave drew national attention. Time magazine wrote about it in 1959, and people from across the country came to see the neighborhood, many taking bus tours provided by the Atlanta Convention and Visitors Bureau.

Jennifer Walton, who grew up there with her parents, both educators, remembers those tours, though she didn’t understand her neighborhood’s significance as a child. Walton now owns a house in the area on Larchmont Drive.

“I stayed because of the rich history of the neighborhood, the quality of the houses and because my mother is still there,” she says. “It’s home for me.”

In fact, many of the houses in Collier Heights are still occupied by the original owners or their children, nieces or nephews, and contain a lot of the original furniture.

The neighborhood and its current residents are the subject of The View from Collier Heights, an exhibition by photographer Lydia A. Harris at the Auburn Avenue Research Library’s satellite gallery at Hammonds House Museum (through August 24). It includes 30 of the 130 photos in her book, The Passing of Collier Heights.

The hilly land in Collier Heights required builders to adapt the structures to the slopes of the property, which can be seen in the photo of the tan-pink brick home, “Built in 1957.”

The brown house in “GA Tech Student Design” depicts a modernist home amid a dozen tall, lush trees and looks like something out of Mad Men. 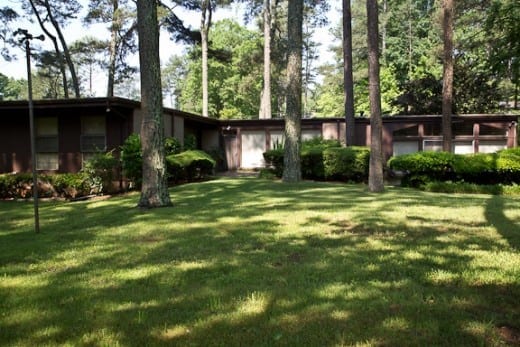 Harris discovered the neighborhood in 2010 while visiting a friend who had purchased a house there. Captivated by the renown of its initial residents, the Boston artist started taking pictures of the area and its current residents with her 4×5 camera. She decided to make it the subject of her thesis project for her MFA at Tufts University in Massachusetts.

Some residents were hesitant at first to have a white woman come into their predominantly black community taking pictures. Harris, who took the photos between 2010 and 2014, persisted.

“I visited the neighborhood twice a year [for four years] and stayed for two weeks each visit,” she says. “When people saw that I kept coming back they warmed up to me.” 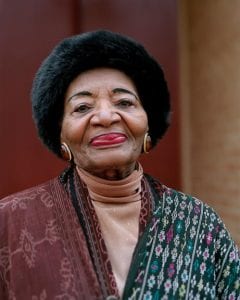 One of the first was Christine King Farris, Martin Luther King, Jr.’s sister, who is wearing a black fur hat and colorful shawl with bright red lipstick in her portrait at Hammonds House.

Community pride and reverence for history abound. Collier Heights became the City of Atlanta’s first Local Historic District in 2013. “We started the process of applying for historical designation, because we wanted to preserve the uniqueness of our community,” says Harold Gordon, the president of the Collier Heights Community Association (CHCA). “We saw investors start to tear down the brick homes and build stucco homes.”

Harris remains surprised by how many Atlantans know nothing about the area. “The neighborhood is beautiful,” she says. “It’s Bankhead Highway that needs some work. Property values in the area are not great.

“I’d like to see the real estate community become more involved like they were back in the day when they would have the neighborhood tours.”

Harris closed her talk at Hammonds House with these words: “The streets might not have been paved in 1957 and I don’t know if the residents knew that they were making history back then, but it is a history that has meaning and has paved the way for opportunity for many.

“I thank the citizens of Collier Heights for letting me and helping me tell the story through pictures, historical artifacts and their own voices, voices I hear every time I look at the images.”