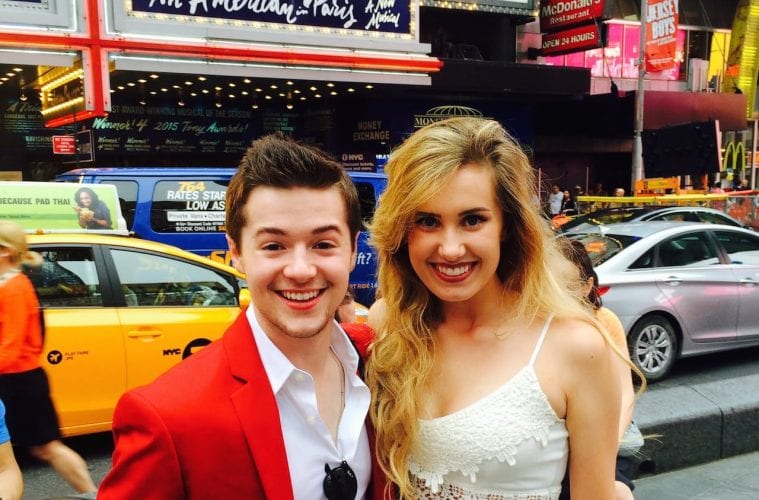 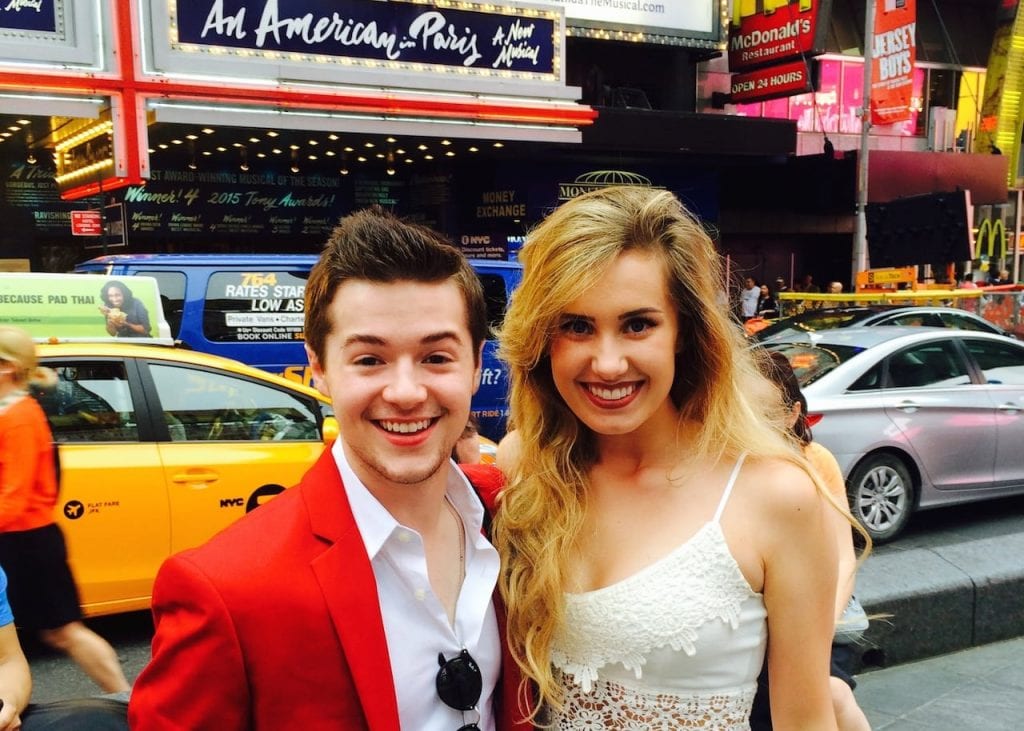 Nick Eibler and McKenzie Kurtz ready to see Broadway’s An American In Paris.

By virtue of waltzing away with the top acting prizes at the recent Shuler Hensley Awards, Nick Eibler and McKenzie Kurtz participated in the 7th annual National High School Musical Theater Awards at the Minskoff Theatre on Broadway earlier this week. Neither won, but the experience proved beneficial to both.

Eibler, who recently graduated from West Forsyth High School, and Kurtz, a recent graduate of Milton High School, competed against 50 other students across the country at the June 29 event, also known as the Jimmy Awards. Both took part in opening and closing ensembles and nominee medleys.

Kurtz performed from Mary Poppins, which won her a 2015 Lead Actress Shuler, while Eibler sang from Nice Work if You Can Get It, for which he took home a Best Actor Shuler. Both are 18.

Their New York experience began last Wednesday with five days of master classes, private coaching and rehearsals with theatre professionals. Included in that was attending a performance of the Tony-winning musical An American in Paris, which included a talkback with some of the show’s performers.

Kurtz is a veteran of the Shuler Hensley Awards (which celebrate excellence in high school musical theater throughout Georgia), having performed four times, but she feels the national awards show is different from the local version. “The Jimmys are a more intensive kind of week,” she says. “It’s very taxing; it’s go-go-go all the time. The Shulers are more a celebration, more relaxed and fun, but both are great experiences for different reasons.” 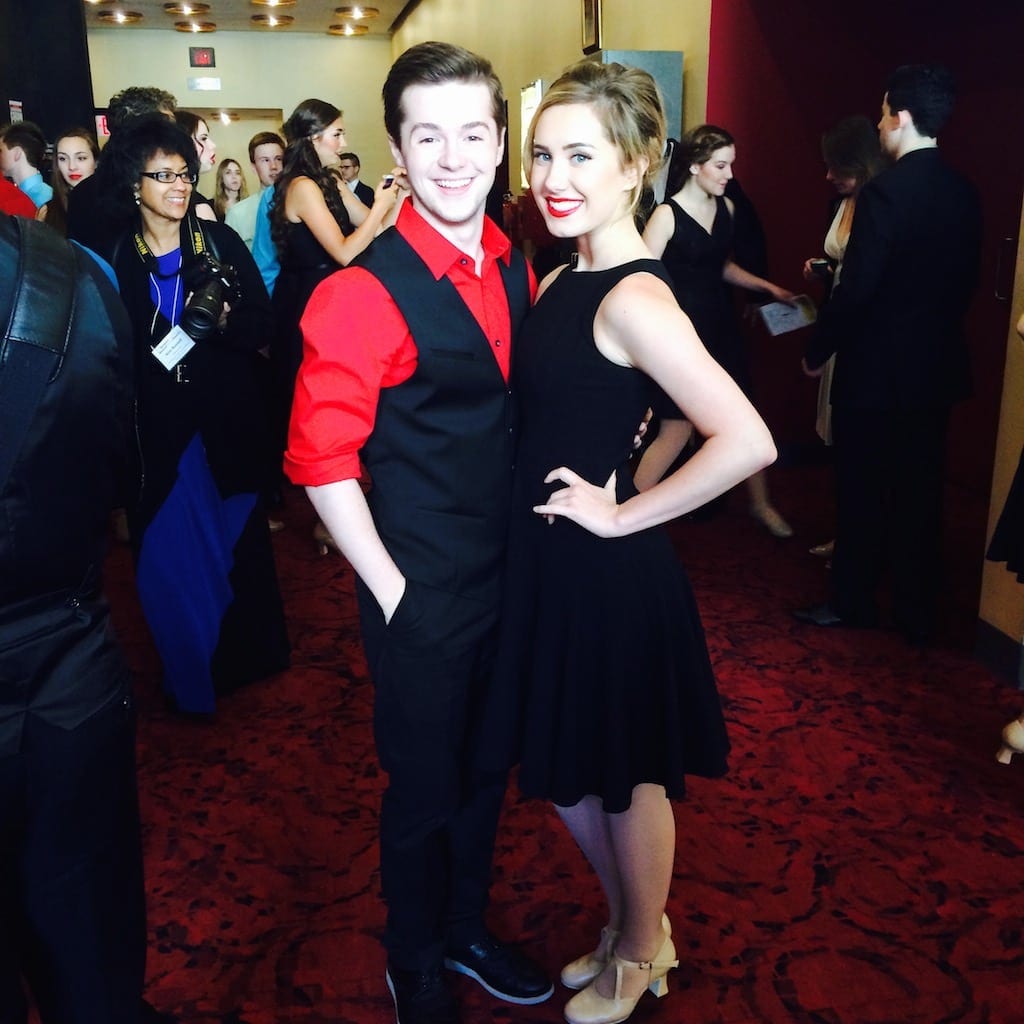 Eibler and Kurtz backstage at the Jimmys.

This was not her first time at the Jimmys, either. Two years ago, she advanced to the national competition by winning a Lead Actress Shuler for her work as The Lady of the Lake in Monty Python’s Spamalot. “The first time you’re in amazement,” she says. “You’re glad to be there. This time, I knew more what I was getting into, what was going to happen, and I think I was more prepared for the crazy week. It renewed my passion for theater. This is why I want to do this with my life.”

Eibler went to watch Kurtz, his best friend, when she performed at the Jimmy Awards two years ago, but this was his first time as a participant. The five days were more than he could ever have imagined.

“Getting to perform on a Broadway stage was incredible, as was working with so many talented people,” he says. “(Broadway performer) Adam Cantor was our vocal coach.”

Natalie Barrow, director of arts education and community outreach for ArtsBridge Foundation, formerly known as the Cobb Energy Performing Arts Centre Foundation, and the director of the Shuler Awards, escorted Eibler and Kurtz on their trip. For her, seeing them interact and work hard was a great reflection on Georgia’s talent.

“I am so incredibly proud of how they represented Georgia in New York,” she says. “Seeing them with their peers, working so hard and dedicating everything they have, continues to prove how vital arts education is in student’s lives.”

Both Kurtz and Eibler have been performing from early ages and consider themselves lucky that they have received educations that have allowed them to pursue their dreams.

As a senior, Eibler got to star in both Nice Work If You Can Get It as well as Big Fish. “I feel we are both fortunate to be able to go to public schools with great performing arts programs,” he says. “I know I would not be the performer I am without all the people I have gotten to work with. Doing so many roles has allowed me to develop other parts of me as a performer and allowed me to be more versatile.”

The pair have also been influenced locally by Hensley, the Tony Award-winning actor who hails from the area and moved back home a few years ago. “Really just by being around him the last four years and watching him work, that has been almost advice enough,” says Kurtz. “Not direct advice, but a great thing to see.”

Both performers will be pursuing musical theater careers — Eibler will be attending Texas State University in the fall and Kurtz will be going to the University of Michigan.

“I think the Shuler Awards have established a great theater community in Georgia, and they really make a lot of connections between students who may be far away from each other,” Kurtz says. “They showcase every school in the state, and we have met some of our closest friends by meeting them at the Shulers.”

Though the landscape for Atlanta artists has changed over the last decade, with plenty of work available in the area, the two plan to move to New York. During the summer, Eibler would like to land some Atlanta acting gigs, but they both feel it’s essential to be in the heart of the city to pursue their theater careers just after college.