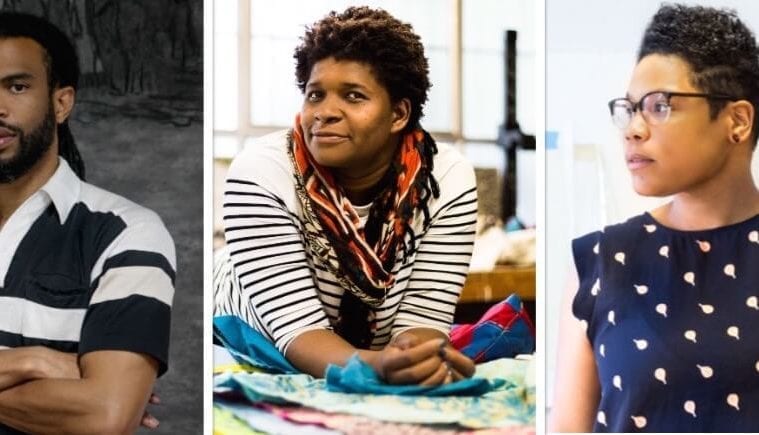 The Museum of Contemporary Art of Georgia has announced the winners of its prestigious annual Working Artist Project Fellowship for 2018–19: Cosmo Whyte, Myra Greene and Krista Clark.

MOCA GA developed the Working Artist Project (WAP) to support mid-career and established artists in the Atlanta area. This year, the museum will provide each winner with a stipend of $15,000, a $1,000 art supply credit from Binders Art Supply, a paid studio apprentice, a solo exhibition at MOCA GA of new works created during the WAP grant period, inclusion of one new work in the MOCA GA permanent collection and production of an accompanying full-color exhibition solo catalog.

Krista Clark and Myra Greene were both recent subjects of ArtsATL‘s In the Studio series, and Whyte’s show at Marcia Wood last November was reviewed by ArtsATL contributor Deanna Sirlin.

The finalists this year were chosen by Allison Glenn, associate curator of contemporary art at Crystal Bridges Museum of American Art. There have been a total of 33 WAP Fellows over the past 11 years, including the three newly announced winners. The program is funded by the Charles Loridans Foundation and the Antinori Foundation, with additional funding provided by the National Endowment for the Arts.

MOCA GA provided the following bios of each artist: Krista Clark draws moments between presence and absence in the historic West End Atlanta neighborhood of Westview. As the city’s sprawl changes the landscape, Westview’s Craftsman bungalows are in constant danger of erasure. As demographics shift, families are displaced, and vibrant homes are replaced by fences, dumpsters, blue tarps and tools for large-scale construction, if not demolished entirely. In Atlanta Contemporary’s Sliver Space, Clark will mimic these environments by physically drawing in space, recreating these architectural gestures while they are in a state of flux. Greene uses a diverse photographic practice to explore representations of race. Greene is currently working on a new body of work that uses African textiles as a material and pattern to explore her own relationship to culture. She received an Illinois Arts Council Fellowship in Photography and has completed residencies at Light Work in Syracuse, New York, and the Center for Photography at Woodstock. Her work is in the permanent collection of Museum of Contemporary Photography in Chicago, Museum of Fine Arts in Houston, The National Gallery of Art in Washington, D.C., the Nelson-Atkins Museum of Art, Kansas City, and the Princeton University Art Museum. Myra Greene’s work has been featured in national exhibitions in galleries and museums including The New York Public Library, Duke Center for Documentary Studies, Williams College Museum of Art, Spelman College Museum of Fine Art in Atlanta, Museum of the African Diaspora in San Francisco, and Sculpture Center in New York City. Myra Greene was born in New York City and received her B.F.A. from Washington University in St. Louis and her M.F.A. in photography from the University of New Mexico. She currently resides in Atlanta, Georgia, where she is an associate professor of photography at Spelman College. Cosmo Whyte was born in St. Andrew, Jamaica, in 1982. The Jamaican-born artist attended Bennington College in Vermont for his Bachelor in Fine Arts, Maryland Institute College of Art for his post-baccalaureate certificate and the University of Michigan for his M.F.A. He has exhibited in the US, Jamaica, Norway, France and South Africa. In 2010, he was the winner of the Forward Art Emerging Artist of the Year award. In 2015, he was the recipient of the International Sculpture Center’s “Outstanding Student Achievement in Contemporary Sculpture Award,” and in 2016, he was the recipient of an Artadia Award. In 2016, Cosmo Whyte participated in the Atlanta Biennial and the recent 2017 Jamaica Biennial. Cosmo Whyte is based in Atlanta, Georgia, and Montego Bay, Jamaica, and is currently a prof–essor at Morehouse College.